Pickleball, the country’s fastest growing sport, is also popular in this jail

The sport that combines elements of tennis, badminton and ping pong is being played in elementary schools, community centers, country clubs and several jails. 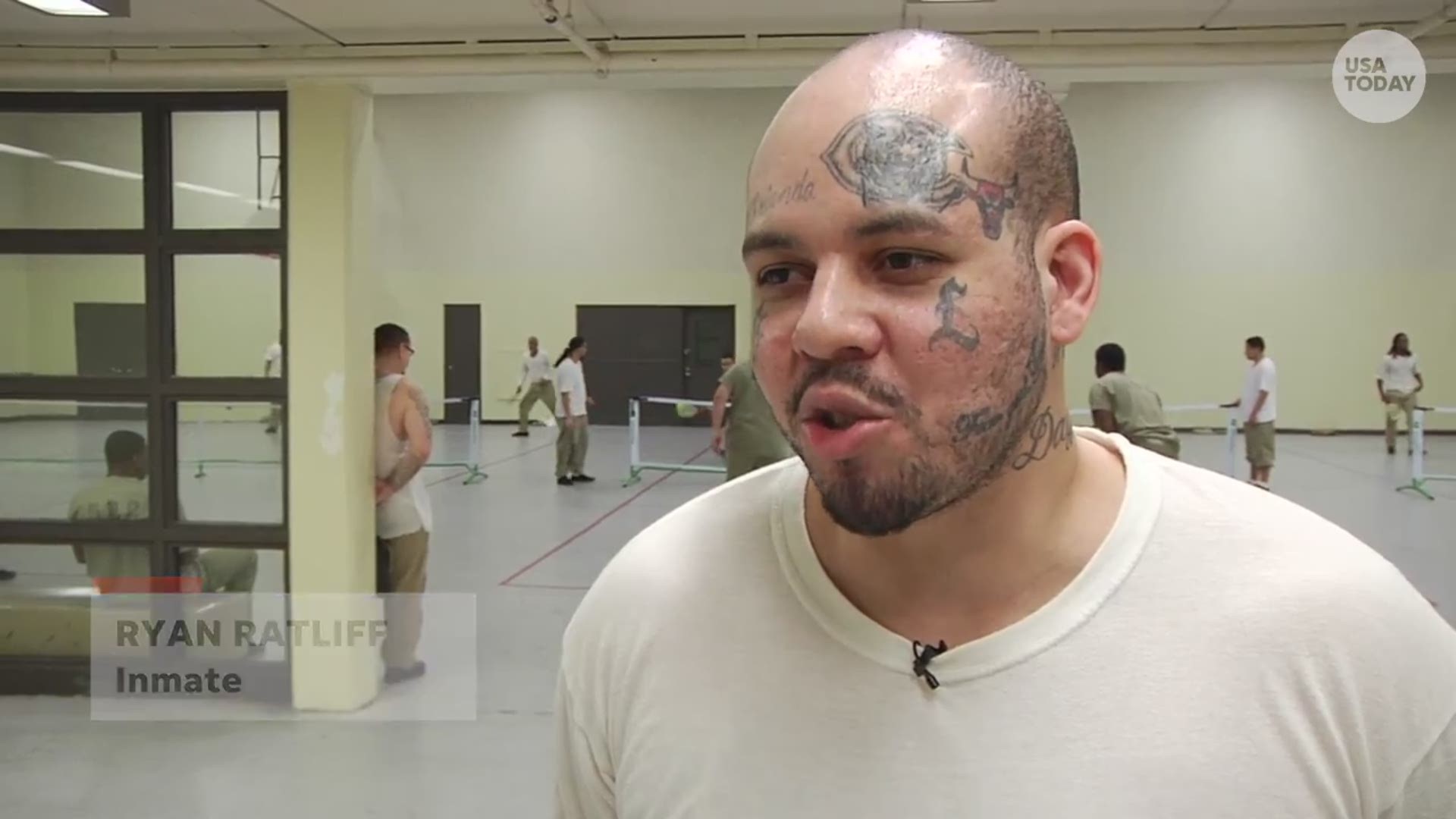 Ryan Ratliff writes his wife and two daughters twice a week, and lately has been trying to find a way to best explain the new game with a peculiar name he’s been playing as a prisoner in Division 10 of Cook County Jail.

“It’s like tennis, but with a ping pong way of playing,” Ratliff says.

That’s pickleball, a sport that combines elements of those racket games as well as badminton, from which pickleball originated in the 1960s.

The sport is the fastest-growing in the U.S., with more than 2.8 million players and a 12% increase in the past year, according to the Sports & Fitness Industry Association. It is played in elementary schools, community rec centers, country clubs and is making its way behind bars in several jails across the country.

At Cook County, one of the country's largest single-site jails, select inmates facing charges that range from robbery to murder may not be able to escape their circumstances in the maximum security division, but they do find that pickleball provides a break from reality.

“We’re all fighting tough cases. Pickleball, for us to come down and play, to laugh a little, it brings our stress level down,” says Ratliff, a 28-year-old from nearby Maywood, Ill., whose face is checkered with tattoos — including logos of the Chicago Bulls, White Sox and Bears. His Bears tattoo on the left side of his forehead actually covers a gang sign.

“I’m trying to change my life,” says Ratliff, awaiting a trial for charges of attempted murder and armed robbery.

“It’s made everybody bring out their inner child,” says Manzo, who is facing charges of attempted murder and residential burglary. “It helps guys be more relaxed instead of trying to be all tough.”

That was the message Roger BelAir brought when he pitched pickleball to Cook County Jail. A financial expert, author, public speaker and pickleball guru from Seattle, he donated equipment to the facility and helped get the sport up and running.

“When I first came here, to teach the rules, you could tell by their body language how reserved they were,” says BelAir, who took to the sport seven years ago. “But after they got on the court for about 15 minutes, they were like a bunch of 5 year olds on Christmas. I think escapism is beneficial for all of us. These guys are all awaiting their trial date so it’s a way to forget their problems for at least an hour. When you’re on the court, you can’t think of anything else other than hitting the ball over the net.”

Sheriff Tom Dart, the chief executive of Cook County Jail, says when he was pitched pickleball by BelAir in a letter, he thought it was a joke – until his 8-year-old daughter told him all about playing it.

“We really try to be cognizant of what we bring into the jail,” Dart says, “and that we’re not giving (inmates) something that will make things worse. Guys are so highly charged and competitive, we look for (activities) that relieve anxiety more than increase it. There’s a calming element to pickleball you don’t have in other sports and the rules are easy to pick up.”

Pickleball is played with a plastic ball with holes in it, and a racket that is about 8 inches wide and 16 inches long. The court – often adapted from a tennis court – is 20 feet wide by 44 feet long.

Only the server can score, and the ball must bounce once on the serve before a player is allowed to hit in the air, and players must avoid hitting the ball from inside the non-volley "kitchen" zone (7 feet from the net).

Dart says because Cook County Jail holds prisoners for a longer period of time than most county jails – almost 20% of the jail’s more than 6,000 inmates stay for a year or more – it’s important to assist with inmates’ mental health while awaiting trial. Most U.S. jails, as opposed to prisons, have limited sports and recreation activities outside of basketball and chess.

“Jails have never been thought of to need athletic programming because it’s supposed to be in and out,” Dart says. “But we’re one of the worst in the country with that. I have three (inmates) who have been waiting 10 years for their trial. When you’re in a confined area for so long, with (a pending trial) hanging over your head, there are going to be mental health issues. Nothing good happens when you sit and wait like that.”

Jakhair Carrell, an 18-year-old charged with armed robbery, says the sport has been a great facilitator in coping with his ADHD, however, he adds that inmates tend to be skeptical when they first learn of pickleball.

“Pickleball fills a void for us – like we’re not in jail, just for a little while,” Carrell says. “Everyone’s got a smile on their face and in a more joking (mood), even when someone’s trying to cheat.

“With pickleball, you don’t see as many fights as other sports because it’s not as physical. But it’s not a sissy sport. It’s a little bit more about reflex, skill and speed.”

“The sport slows these guys down more than basketball,” says Jim Edmondson, Cook County Jail’s Education and Alternative Programs Coordinator who oversees the inmates for sporting activities. “And there’s a little bit more strategy so it’s more competitive for older guys going up against some of the better athletes.”

That’s the case for Derrick Smith, a 58-year-old prisoner charged with murder who says pickleball “just took to me.”

“This is my favorite because I don’t pump iron or play (basketball),” Smith says. “I’m too old for that. I’m definitely the oldest player out there competing with these kids.”

Edmondson says inmates are selected to play based on their behavior and number of disciplinary incidents. That makes the opportunity to play pickleball a motivating factor for inmates who otherwise wouldn't get along.

“Outside the jail, a lot of us are enemies on the streets,” says 38-year-old Clarence Dunner, charged with attempted murder. “Here, through this sport, you can see us playing and laughing together in unison – in harmony with one another.”

BelAir says that's the overarching goal of pickleball in jails – to foster a camaraderie among different groups of people. One of his new initiatives is to feature doubles teams made up of guards and inmates. Outside of bringing pickleball to Cook County, BelAir has also visited Washington's state jails and Rikers Island in New York.

On a deeper level, Ratliff says BelAir’s kind gesture in bringing pickleball to the jail helps humanize inmates who are trying to turn around their life.

“It makes us feel more like we’re appreciated for who we are,” Ratliff says, “that even though we made bad decisions in our life, people still care about us – that we can still do good.”