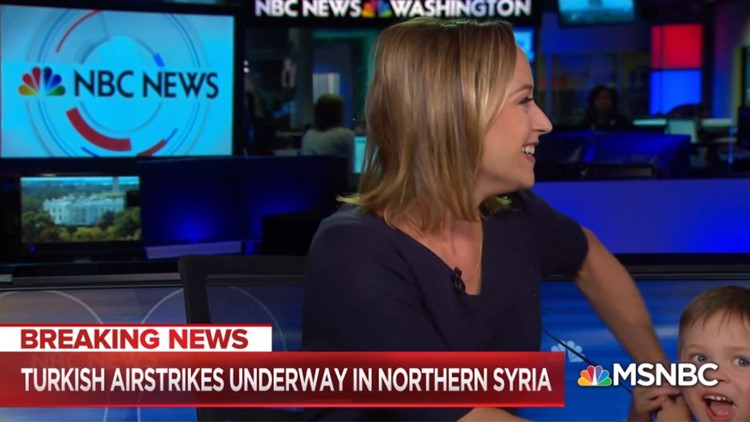 Photo by: MSNBC
NBC correspondent Courtney Kube was interrupted during a breaking new broadcast Wednesday morning - by one of her 4-year-old sons.

WASHINGTON — When NBC News correspondent Courtney Kube had some breaking news to share Wednesday on MSNBC, an unexpected visitor decided to join her.

Kube's 4-year-old son cheerily popped up on screen and tried to get his mom's attention, all while she was live on the air trying to describe Turkey's incursion into Syria.

"Excuse me, my kids are here. Live television," the Pentagon correspondent jokingly remarked as the camera shot from NBC's Washington studio quickly went to a graphic.

MSNBC shared a clip of the adorable interaction on Twitter with the caption, "Sometimes unexpected breaking news happens while you're reporting breaking news."

Kube later explained that the breaking news in Syria Wednesday morning didn't line up with the preschool drop-off, so her 4-year-old twin boys were there with her, according to NBC.

As of Thursday morning, more than 2.6 million people have watched the clip on Twitter.

Many online praised how Kube and the MSNBC team handled what one Twitter used described as an "unexpected invasion in the studio by a cute invader."

NBC Legal contributor Katie Phang gave a shout-out to Kube for "showing the world how #workingmoms make it happen!"

"Kudos to the savvy producer in the control room who thought, "uh...now's probably a good time to run a graphic for a few seconds,"  CNN legal analyst Elliot Williams tweeted.

The interrupting interaction had many reminiscing back to the "BBC Dad," who became a viral sensation after his children interrupted his interview back in March 2017.

RELATED: BBC dad: 'I made this minor mistake that turned my family into YouTube stars'

Earlier this month, MSNBC also made headlines when NBC News correspondent Julia Ainsley announced her pregnancy after having to move off camera because she was experiencing morning sickness.