NASA rover lands on Mars, sends back photos from surface

"Touchdown Confirmed!" | NASA's Perseverance rover has sent back its first photo from the surface of Mars. 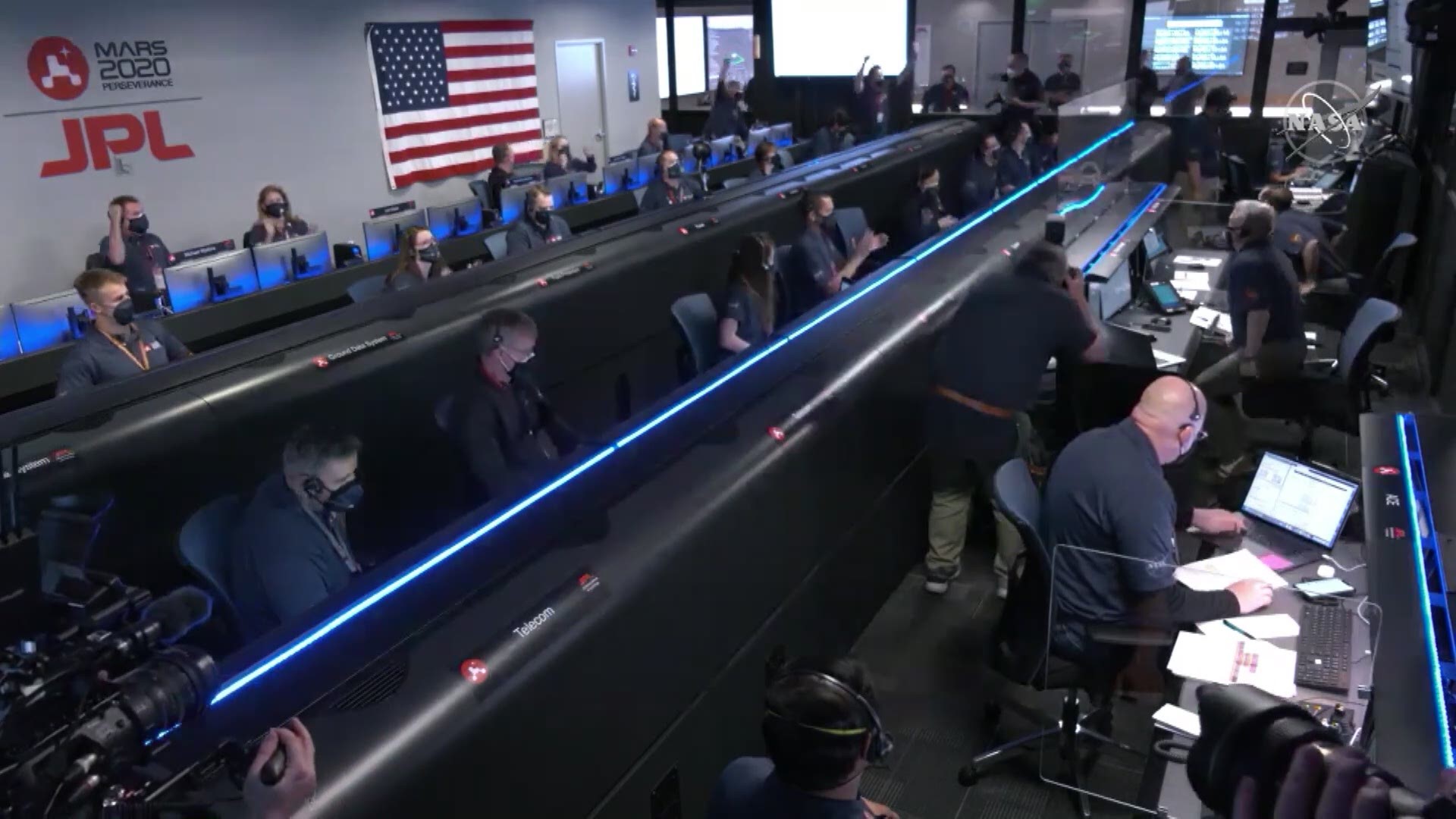 CAPE CANAVERAL, Fla. — A NASA rover streaked through the orange Martian sky and landed on the planet Thursday, accomplishing the riskiest step yet in an epic quest to bring back rocks that could answer whether life ever existed on Mars.

Ground controllers at the space agency’s Jet Propulsion Laboratory in Pasadena, California, cheered and exchanged fist bumps and high-fives in triumph — and relief — on receiving confirmation that the six-wheeled Perseverance had touched down on the red planet, long a deathtrap for incoming spacecraft.

It took a tension-filled 11 1/2 minutes for the signal to reach Earth.

The landing marks the third visit to Mars in just over a week. Two spacecraft from the United Arab Emirates and China swung into orbit around Mars on successive days last week.

All three missions lifted off in July to take advantage of the close alignment of Earth and Mars, traveling some 300 million miles in nearly seven months.

Perseverance, the biggest, most advanced rover ever sent by NASA, became the ninth spacecraft to successfully land on Mars, every one of them from the U.S.

Credit: AP
In this photo provided by NASA, members of NASA's Perseverance rover team react in mission control after receiving confirmation the spacecraft successfully touched down on Mars, Thursday, Feb. 18, 2021, at NASA's Jet Propulsion Laboratory in Pasadena, Calif. The landing of the six-wheeled vehicle marks the third visit to Mars in just over a week. Two spacecraft from the United Arab Emirates and China swung into orbit around the planet on successive days last week. (Bill Ingalls/NASA via AP)

The car-size, plutonium-powered vehicle arrived at Jezero Crater, hitting NASA’s smallest and trickiest target yet: a 5--by-4-mile strip on an ancient river delta full of pits, cliffs and fields of rock. Scientists believe that if life ever flourished on Mars, it would have happened 3 billion to 4 billion years ago, when water still flowed on the planet.

RELATED: Mars 2020 Perseverance rover gets ready to land on the Red Planet

RELATED: Purdue scientist excited for rover landing and search for life on Mars

Over the next two years, Percy, as it is nicknamed, will use its 7-foot (2-meter) arm to drill down and collect rock samples with possible signs of bygone microscopic life. Three to four dozen chalk-size samples will be sealed in tubes and set aside on Mars to be retrieved by a fetch rover and brought homeward by another rocket ship. The goal is to get them back to Earth as early as 2031.

Scientists hope to answer one of the central questions of theology, philosophy and space exploration.

“Are we alone in this sort of vast cosmic desert, just flying through space, or is life much more common? Does it just emerge whenever and wherever the conditions are ripe?” said deputy project scientist Ken Williford. “We’re really on the verge of being able to potentially answer these enormous questions.”

China’s spacecraft includes a smaller rover that also will be seeking evidence of life — if it makes it safely down from orbit in May or June.

Perseverance was on its own during the NASA-described “seven minutes of terror” descent.

Flight controllers waited helplessly as the preprogrammed spacecraft hit the thin, 95% carbon dioxide Martian atmosphere at 12,100 mph (19,500 kph), or 16 times the speed of sound, slowing as it plummeted.

It released its 70-foot (21-meter) parachute, jettisoned its heat shield, and then used a rocket-steered platform known as a sky crane to lower the rover the final 60 or so feet (18 meters) to the surface.

It was the second time NASA dropped in on Mars via sky crane. The rover Curiosity pioneered the technique in 2012; the vehicle is still prowling around a crater.

Credit: NASA/JPL-Caltech
This illustration depicts NASA's Perseverance rover operating on the surface of Mars. Perseverance will land at the Red Planet's Jezero Crater a little after 3:40 p.m. EST (12:40 p.m. PST) on Feb. 18, 2021.

Mars has proved a treacherous place: In the span of less than three months in 1999, a U.S. spacecraft was destroyed upon entering orbit because engineers had mixed up metric and English units, and an American lander crashed on Mars after its engines cut out prematurely.

Perseverance will conduct an experiment in which it will convert small amounts of carbon dioxide in the atmosphere into oxygen, a process that could be a boon to future astronauts by providing breathable air and an ingredient for rocket fuel.

The rover is also equipped with a record 25 cameras and two microphones, many of them turned on during descent. Among the never-before-seen views NASA intends to send back in the next couple days: the enormous supersonic parachute billowing open and the ground getting closer.

“A feast for the eyes and ears. It’s really going to be spectacular,” observed Arizona State University’s Jim Bell, lead scientist for a pair of mast cameras that will serve as the rover’s eyes.

NASA is teaming up with the European Space Agency to bring the rocks home. Perseverance’s mission alone costs nearly $3 billion.

The only way to confirm — or rule out — signs of past life is to analyze the samples in the world’s best labs. Instruments small enough to be sent to Mars wouldn’t have the necessary precision.

“It’s really the most extraordinary, mind-boggingly complicated and will-be history-making exploration campaign,” David Parker, the European Space Agency’s director of human and robotic exploration, said on the eve of landing.

The Associated Press Health and Science Department receives support from the Howard Hughes Medical Institute’s Department of Science Education. The AP is solely responsible for all content.