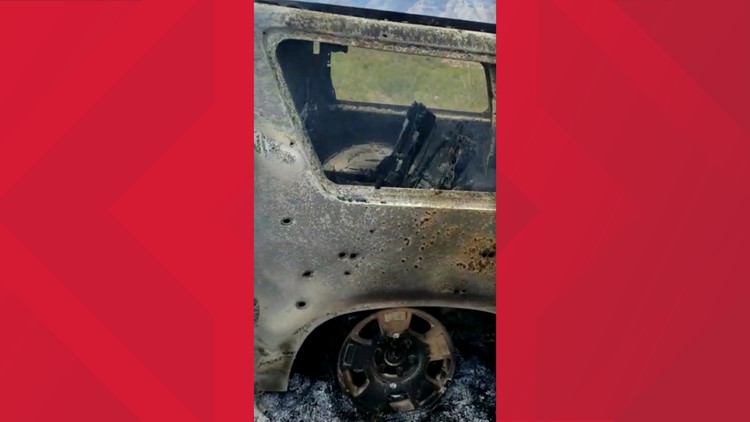 Photo by: AP
This frame from Nov. 4, 2019, video by Kenny Miller and posted on the Twitter account of Alex LeBaron shows a burned-out vehicle that was being used by some members of the LeBaron family as they were driving in a convoy near the Sonora-Chihuahua state border in Mexico. Mexican authorities say drug cartel gunmen ambushed multiple vehicles, including this one, slaughtering several women and children. (Kenny Miller/Courtesy of Alex LeBaron via AP)

Mexico's foreign secretary says President Andrés Manuel López Obrador has phoned U.S. President Donald Trump to express condolences at the slaying of nine members of a religious community in northern Mexico, saying they were citizens of both nations.

Marcelo Ebrard says the Mexican leader expressed "thanks for the offer of help, if Mexico needs some sort of help." And he said Trump "reiterated confidence" in Mexican authorities "to apply justice."

The comments were carried in a video on the Reporte Indigo news website.

Earlier Tuesday, Trump tweeted an offer to help Mexico "wage WAR" against drug cartels suspect of committing the killing in a mountainous part of northern Mexico.

López Obrador expressed thanks to Trump during a later news conference, but demurred at Trump's offer, saying "The worst thing you can have is war."

Mexico's top security official said at least 3 women and 6 children were viciously killed by cartel gunmen and one child is still missing in northern Mexico. Relatives say the victims are U.S. citizens.

The victims are members of a faction that long ago broke away from The Church of Jesus Christ of Latter-day Saints and some have family ties in Utah. Security Secretary Alfonso Durazo said Tuesday the gunmen may have mistaken the group's large SUVs for rival gangs.

A Utah man,Tyler Langford, said that three of the women killed were his aunt and two cousins. He said they the family was traveling with children in three vehicles.

According to another relative of the family, Heather Miller, the family lived in Western North Dakota. She named the victims as Christina Marie Langford Johnson, 29, Dawna Langford, 43, and Trevor Langford, 11, and Rogan Langford, two-and-a-half. Also slain were Rhonita Miller, 30, Howard Miller, 12, Krystal Miller, 10, and 8-month-old twins, Titus and Tiana Miller, according to Valley News.

Tyler said Rhonita was on her way to Phoenix to pick up her husband when the tragedy occurred. Dawna and Christina were on their way to visit relatives in Mexico.

"This is the time for Mexico, with the help of the United States, to wage WAR on the drug cartels and wipe them off the face of the earth. We merely await a call from your great new president!" Trump said in a series of tweets addressing the tragedy.

Trump added that the U.S. government stands ready to get involved. He said that Andrés Manuel López Obrador has made fighting drug cartels a top issue.

"But the cartels have become so large and powerful that you sometimes need an army to defeat an army! "

López Obrador has favored a less militaristic approach to the problem, saying a policy of frontal confrontations by his predecessors led only to more violence.

This frame from Nov. 4, 2019, video by Kenny Miller and posted on the Twitter account of Alex LeBaron shows a burned-out vehicle that was being used by some members of the LeBaron family as they were driving in a convoy near the Sonora-Chihuahua border in Mexico. Mexican authorities say drug cartel gunmen ambushed multiple vehicles, including this one, slaughtering several women and children. (Kenny Miller/Courtesy of Alex LeBaron via AP)
AP

Senator Mitt Romney, whose father was born in a similar faction that broke away from The Church of Jesus Christ of Latter-day Saints called the incident "a great tragedy" and something "really unthinkable."

The Republican from Utah said Tuesday that the attacks were probably "associated with the business of the cartels" rather than a targeted attack on the U.S.-affiliated religious community.

He said he agrees with President Donald Trump that "Mexico has to really knuckle down and go after some of these cartels and stop this escalating level of violence."

WARNING: The following video contains content that may be sensitive to some viewers.

The federal Department of Security and Citizens' Protection said security forces were reinforced with National Guard, army and state police troops in the area following "the reports about disappearance and aggression against several people."

The families lived in La Mora, about 70 miles (110 kilometers) south of Douglas, Arizona. Many of the church's members were born in Mexico and thus have dual citizenship.

It would not be the first time that members of the break-away church had been attacked in northern Mexico, where their forebears settled — often in Chihuahua state — decades ago.

In 2009, Benjamin LeBaron, an anti-crime activist who was related to those killed in Monday's attack, was murdered in 2009 in neighboring Chihuahua state.