After months of protests in Hong Kong, this was the first time a protester is known to have been shot. 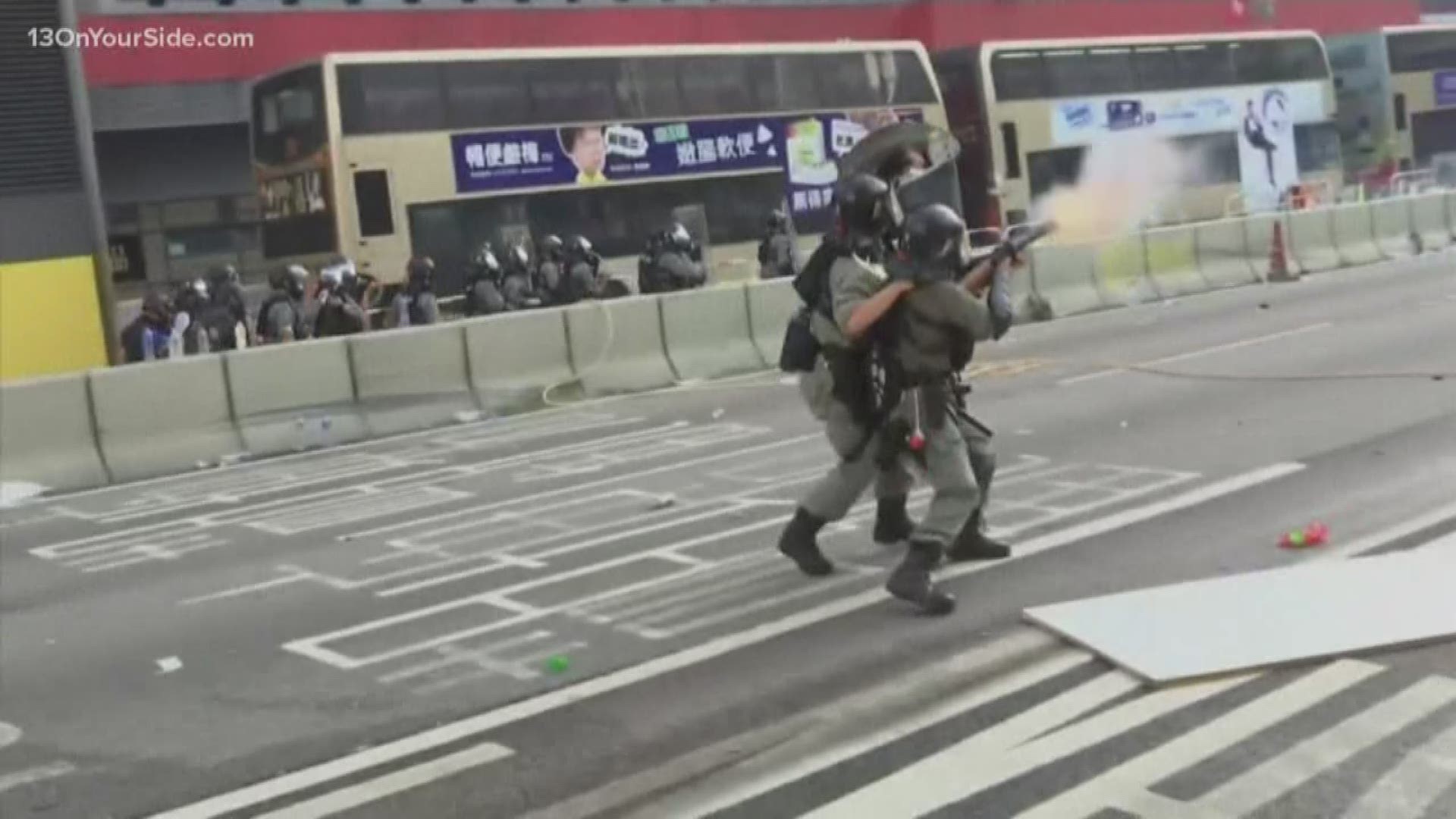 Hong Kong police shot a teenage protester at close range in the chest Tuesday, leaving him bleeding and howling on the ground, in a fearsome escalation of anti-government demonstrations that spread across the semi-autonomous Chinese territory. Tens of thousands marched in a day of rage as Communist leaders in Beijing celebrated 70 years in power.

The single pistol shot fired by the officer as protesters swarmed toward him hit the 18-year-old on the left side of his chest, police spokeswoman Yolanda Yu said. She described the protesters as "rioters" and said the officer feared for his life. The wounded teenager was taken to a hospital for treatment, she added, without giving details about his condition.

While officers have previously fired warning shots in the air on multiple occasions during months of protests in Hong Kong, this was the first time a protester is known to have been shot. There were other instances Tuesday when officers also drew their weapons, including two with bloodied faces who pointed pistols, as protesters and riot police fought fierce battles at multiple locations in the city on edge, with many determined to spoil the Oct. 1 anniversary of Communist rule.

Video that spread quickly on social media appeared to show the officer opening fire as the protester came at him with a metal rod, striking the officer's shooting arm.

Taken by the City University Student Union, it showed a dozen black-clad protesters hurling objects at a group of riot police and closing in on the lone officer who pointed his pistol and opened fire. The protester toppled backward onto the street, bleeding from below his left shoulder.

As another protester rushed in to try to drag away the wounded youth and was tackled by an officer, a gasoline bomb landed in the middle of the group of officers in an explosion of flames.

Credit: AP
An injured anti-government protester is attended to by others during a clash with police in Hong Kong, Tuesday, Oct. 1, 2019. Thousands of black-clad protesters marched in central Hong Kong as part of multiple pro-democracy rallies Tuesday urging China's Communist Party to "return power to the people" as the party celebrated its 70th year of rule. (AP Photo/Gemunu Amarasinghe )

The shooting marked a dramatic escalation in violence that spread chaos to multiple areas of China's freest and most international city.

Riot police fired tear gas in at least six locations and used water cannons in the business district as protesters turned streets into battlefields. A security clampdown to thwart violence that would embarrass Chinese President Xi Jinping failed to deter the protests, including a massive march in the city center.

Organizers said at least 100,000 people marched along a broad thoroughfare in defiance of a police ban, chanting anti-China slogans and some carrying Chinese flags defaced with a black cross. Police didn't provide an estimate of the turnout.

"They are squeezing our necks so we don't breathe the air of freedom," said King Chan, a 57-year-old homemaker who came out to protest with her husband.

Many demonstrators tossed wads of fake bank notes usually used at funerals into the air. "The leaders who won't listen to our voice, this is for them," said marcher Ray Luk.

Thousands confronted police across the city, the largest number of simultaneous protests since the unrest began in early June over a now-shelved extradition bill that activists say was an example of how Hong Kong's freedoms and citizen rights are being eroded. The movement has since snowballed into an anti-Chinese campaign with demands for direct elections for the city's leaders and police accountability.

In Wong Tai Sin, a gasoline bomb that protesters hurled at police exploded near motorcycles parked along a pavement, creating a large blaze that was put out by firefighters. Some protesters placed an emergency water hose down a subway station to try to flood it.

"Today we are out to tell the Communist Party that Hong Kong people have nothing to celebrate," said activist Lee Cheuk-yan as he led the downtown march. "We are mourning that in 70 years of Communist Party rule, the democratic rights of people in Hong Kong and China are being denied. We will continue to fight."

Dressed in a black T-shirt and dark jeans, 40-year-old Bob Wong said his clothing expressed "mourning" over "the death of Hong Kong's future."

The popular LIHKG online chat forum used by protesters was inaccessible on cellphones, a move believed to have been made to thwart communication by protesters. More than two dozen subway stations and many shopping malls across the city were shut.

The protests contrasted with Beijing's anniversary festivities marked with a colorful parade and display of new missile technology. Hong Kong Chief Executive Carrie Lam, who is in Beijing for the ceremony, smiled as a Hong Kong float passed by.

As the city's government marked the anniversary with a solemn ceremony in the morning, police used pepper spray to break up a brief scuffle between Beijing supporters and a small group of pro-democracy protesters.

Hong Kong Chief Secretary Matthew Cheung told hundreds of guests at a reception that the city has become "unrecognizable" due to the violence.

Cheung said Beijing fully supports the "one country, two systems" framework that gives Hong Kong freedoms and rights not enjoyed on the mainland. The system was implemented when the former British colony returned to Chinese rule in 1997.