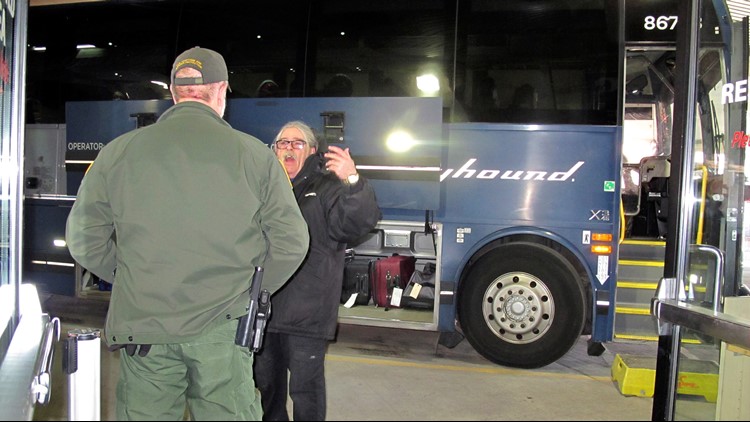 Photo by: AP
In this Thursday, Feb. 13, 2020 photo, a worker speaks with Customs and Border Protection agent seeking to board a Greyhound bus headed for Portland.

Greyhound, the nation's largest bus company, says it will stop allowing Border Patrol agents without a warrant to board its buses to conduct routine immigration checks.

The company announced the change Friday, one week after The Associated Press reported on a leaked Border Patrol memo confirming that agents can't board private buses without the consent of the bus company.

Greyhound had previously insisted that even though it didn't like the immigration checks, it had no choice under federal law but to allow them.

Meanwhile, a comedian from Portland, Oregon, is suing Border Patrol after he was ordered by officers to get off a bus in Spokane last year.

Mohanad Elshieky said he was interrogated for 20 minutes in January 2019 by agents who contended his papers were fake and that he was in the country illegally.

The administrative complaint he filed in April 2019 said Elshieky was detained by Border Patrol officers after producing valid identification documents demonstrating that Elshieky, who was granted asylum in the United States in 2018, was lawfully present in the country.