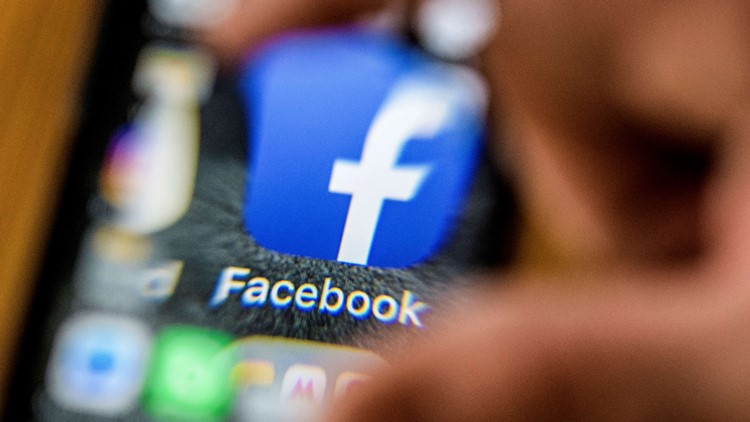 Photo by: MLADEN ANTONOV/AFP/Getty Images
An illustration picture taken through a magnifying glass on March 28, 2018 in Moscow shows the icon for the social networking app Facebook on a smart phone screen.

SAN FRANCISCO — Internal Facebook emails published online by U.K. lawmakers, some involving CEO Mark Zuckerberg, paint a picture of a company aggressively hunting for ways to make money from the reams of personal information it was collecting from users.

Wednesday's release of some 250 pages of emails from 2012 to 2015 – a period of dramatic growth for the newly publicly traded company - provides a rare glimpse into Facebook's internal conversations, suggesting the social media giant gave preferential access to some third-party app developers such as Airbnb, Lyft and Netflix while restricting access for other app developers and considered charging app developers for access to data despite pledges that it would never do so.

According to some of the emails, Facebook discussed cutting off access to rival companies and giving app developers who bought advertising special access to data. It also provided access to app developers when it would encourage Facebook users to spend more time on the social network.

There is no indication that Facebook went forward with a proposal to charge app developers for access to the personal information of Facebook users. On Wednesday Zuckerberg denied Facebook ever sold or considered selling the data of its more than 2 billion users.

"Like any organization, we had a lot of internal discussion and people raised different ideas. Ultimately, we decided on a model where we continued to provide the developer platform for free and developers could choose to buy ads if they wanted," he wrote in a Facebook post responding to the release of internal emails by U.K. lawmakers. "Other ideas we considered but decided against included charging developers for usage of our platform, similar to how developers pay to use Amazon AWS or Google Cloud. To be clear, that's different from selling people's data. We've never sold anyone's data."

The revelations that shed light on previously unknown Facebook practices are included in internal documents seized by U.K. lawmakers from the developer of a now-defunct bikini photo searching app, Pikinis, as part of an investigation into fake news. The emails were sealed in a California lawsuit filed by Six4Three. Six4Three sued Facebook in 2015, alleging its data policies favored some companies over others.

"I’ve been thinking about platform business model a lot this weekend....if we make it so (developers) can generate revenue for us in different ways, then it makes it more acceptable for us to charge them quite a bit more for using platform," Zuckerberg wrote in one email.

In another email in 2012, Zuckerberg seemed to shrug off concerns around the security of Facebook users' data. "I think we leak info to developers, but I just can't think of any instances where that data has leaked from developer to developer and caused real issue for us," he wrote.

Facebook called the Six4Three lawsuit "baseless." The release of the emails without additional context "is very misleading," the company said in a statement.

Public trust in Facebook's handling of people's personal information has been shaken by a series of crises. Chief among them is Cambridge Analytica, a political consulting firm hired by Donald Trump's presidential campaign, which has been accused of improperly accessing millions of Facebook accounts without users' consent. Facebook began to change the way app developers access user data in 2014, closing the Cambridge Analytica loophole.

"If we had only done it a year sooner we could have prevented that situation completely," Zuckerberg said Wednesday.

Damian Collins, who runs the digital, culture, media, and sport parliamentary committee investigating Facebook, said it released the documents because "we don't feel we have had straight answers from Facebook on these important issues."

Last week Collins said he planned to release the emails after after forcing Ted Kramer, the founder of Six4Three, to hand them over during a business trip to London. On Friday, California Superior Court Judge V. Raymond Swope ordered Kramer to turn over his laptop to a forensic expert after Kramer admitted he had turned over the Facebook documents to lawmakers.

"I believe there is considerable public interest in releasing these documents. They raise important questions about how Facebook treats users data, their policies for working with app developers, and how they exercise their dominant position in the social media market," he wrote in a Twitter post.

–When competitor Twitter launched Vine in 2013, Facebook shut down access to keep the mobile video app from growing through friends on the platform and competing with Instagram, which it owns. "Unless anyone raises objections, we will shut down their friends API access today. We've prepared reactive PR," Facebook executive Justin Osofsky wrote to Zuckerberg. "Yup, go for it," Zuckerberg replied.

–In 2015, the company began uploading call and text logs from Android phones while trying to avoid getting consent from users. At the time, a Facebook engineer said the practice was a "high-risk thing to do from a PR perspective." The data offered a comprehensive look into how users communicated on their mobile devices.

–Facebook used its security app, Onavo, to gather information on how many people used certain apps and how often they used them to help Facebook decide which companies it should acquire including messaging app WhatsApp for $19 billion and which to view as a competitive threat.

–Zuckerberg advocated for giving app developers more access to data when it would encourage users to spend more time on Facebook. "We're trying to enable people to share everything they want, and to do it on Facebook," he wrote in an email in 2012. "Sometimes the best way to enable people to share something is to have a developer build a special purpose app or network for that type of content and to make that app social by having Facebook plug into it. However, that may be good for the world but it's not good for us unless people also share back to Facebook and that content increases the value of our network."