Complaint: Patterson chose Jayme Closs at random after seeing her get on bus

A criminal complaint filed Monday details how defendant Jake Patterson told detectives he stopped behind a school bus on his way to work at a local cheese plant one morning as it picked up a young girl on Highway 8. "He knew that was the girl he was going to take," the complaint reads. 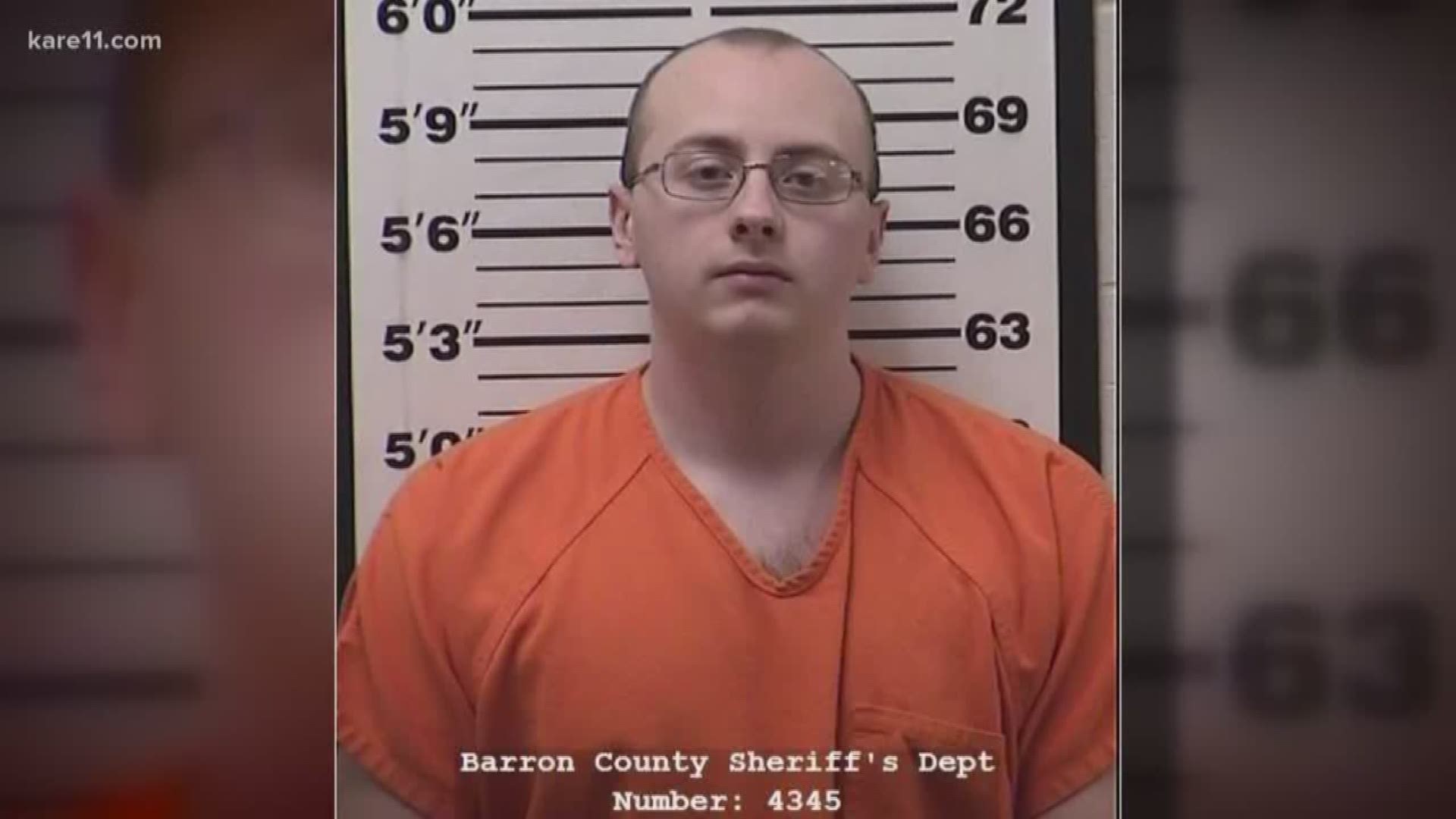 In a criminal complaint filed in Barron County Court Monday prosecutors share the words of accused kidnapper and murderer Jake Patterson as he told detectives he chose Jayme Closs as his victim at random after watching her get on a school bus one morning in Barron.

That complaint charges the 21-year-old Patterson of Gordon, Wis. with two counts of first degree intentional murder, one count of kidnapping and one of armed burglary. It says Patterson confessed to kidnapping Jayme and killing her parents, telling deputies as he was arrested and taken from his car in Gordon that he knew what this was about and "I did it."

Patterson had his first court appearance Monday afternoon. The judge set his bail at $5 million, at the state prosecutor's request, and scheduled his next appearance for Feb. 6. at 11 a.m.

During questioning the night of his arrest, detectives say Patterson told them he stopped behind a school bus on his way to work at a local cheese plant one morning as it picked up a young girl on Highway 8. He said he watched the girl, now known as Jayme Closs, and had no idea of who she was, or who lived at the home. "He knew that was the girl he was going to take," the complaint reads.

The defendant told investigators on his second and last day of employment at the cheese factory he stopped at Walmart in Rice Lake to purchase a black facemask, a sign he would go through with his plan. Patterson said he put quite a bit of thought into the kidnapping, visiting the Closs home twice to scout the place. On one of those occasions he stole license plates from a vehicle parked in the yard so his own plates would not be on display the night he planned to take Jayme. He removed the dome light from the Ford, and the emergency pull cord from the trunk so the girl could not get out after he kidnapped her.

RELATED:  Jayme's grandfather: 'I wasn’t giving up. Nobody was giving up'

Also during questioning investigators say Patterson described taking his father's Mossberg shotgun because it was a popular model and would be hard to trace; wiping down the shotgun shells while wearing gloves so there would be no prints or DNA; and shaving his head and face so he would not leave DNA or hair on the scene.

During the same interview Patterson told authorities he approached the house early the morning of October 15 and saw Jayme's dad James Closs looking out  the window at him. Closs allegedly said something like "show me your badge," thinking Patterson was a police officer. At that moment he told investigators he raised the shotgun and purposely fired it at James Closs's head, killing him immediately.

He then describes finding a locked door, and throwing his shoulder into it up to 15 times before it broke down. Inside he found Jayme and her mom Denise Closs huddled in the bathtub. After taping Jayme's mouth, wrists and ankles, Patterson told investigators he picked up the shotgun as the teen stood next to him and fatally shot Denise Closs. He dragged Jayme to his waiting vehicle, threw her in the trunk and drove off. Patterson estimated he was in the Closs home for less than four minutes.

Mere seconds after leaving the Closs driveway Patterson saw three squads with lights and sirens driving in the opposite direction, responding to a 911 call made by Jayme's mom in the moments before she was killed. When asked what he would have done if they had tried to pull him over, the defendant reportedly told detectives he still had the loaded shotgun in the front seat of the Taurus, and would have shot at the police.

Patterson then told investigators he never would have been caught had he planned everything perfectly. He steered them to the places he had hidden the shotgun used in the murders, and the clothing and boots he had worn. All were recovered as evidence.

Also in the complaint 13-year-old Jayme Closs shares details of her 88 days in captivity, witnessing the murders of her mother and father, and being kidnapped by  a man dressed in black.

In the first interview after she escaped from a cabin outside the town of Gordon and was rescued by concerned residents, Jayme told investigators that after being kidnapped and being taken to Patterson's cabin she was forced to stay underneath his bed, blocked in by plastic totes and weight sets whenever he had friends or relatives over. She said Patterson told her bad things would happen if she ever tried to get away. Jayme also told detectives that he would turn music on in his room so she couldn't hear what was going on in the home, or if there was anyone there with him. She said the defendant would make her stay under the bed whenever he left the house, unable to go to the bathroom for up to 12 hours at a time. Jayme recalled one time the defendant struck her really hard on the back with an object when he became angry with her. There is no mention of any incident of sexual assault in the complaint.

Closs recalled the events of January 10, the day of her escape, describing how Patterson told her he was going to be gone for five or six hours. She was able to force her way out from under the bed by pushing the bins and weights away, then found a pair of Patterson's shoes and left the house. She told authorities she soon came across a neighbor walking her dog, told the woman she was Jayme Closs and that a man named Jake Patterson had killed her parents and kidnapped her.

Jayme earlier described the morning of her kidnapping on October 15, recalling how she was awakened by her dog barking as a car drove up the driveway of her family's home. Jayme told detectives she woke her parents, and went to hide in the bathroom with her mother as her dad James went to the door. Jayme described hearing one gun blast, and knowing her father was dead.

She then details how a man dressed from head to toe in black entered the bathroom and ordered her mother to put tape over Jayme's mouth. She then watched as the man, now known as Jake Patterson, fired a shotgun at her mother's head and killed her.

Authorities on Monday said there will be no more charges against Patterson in Barron County, but there could be charges in Douglas County. Barron County District Attorney Brian Wright said there is additional information that is not included in the criminal complaint.

At a press conference after Patterson's hearing, Wright said this is the "best case outcome" they could have hoped for given the circumstances.

“We’re so grateful for Jayme and her safe return," he said. "And now it’s time for us to obtain justice for her and for her parents.”

He described Jayme's courage as "unbelievable."

"She’s 13 years old and if you read the criminal complaint, you can see the amount of control that he was exerting over her," he said. "And at some point she found it within herself at 13 years old to say, 'I’m going to get myself out of this situation. I think it’s incredible.'"

Wright said they have every reason to believe the case will go to trial.

Patterson, a 2015 graduate of Northwood High School in Minong, has spent his post-high school life bouncing between jobs. The Associated Press reported he spent five weeks in the Marines before being discharged for failing to meet standards in Oct. 2015. Patterson also worked briefly at the Jeannie-O turkey plant in Barron.

A spokesperson for Saputo Cheese confirmed Patterson worked at a Wisconsin-based factory near Barron through a temp agency on Oct. 3 and Oct. 4 but stopped showing up after two days. According to the criminal complaint, Patterson first spotted Jayme Closs during his morning commute to work at the cheese factory on one of those mornings.

Editor's Note: Out of respect for the Closs family, KARE 11 has chosen not to post the full criminal complaint.