Two guys were tired of waiting for the city to fill potholes, so they're doing it themselves 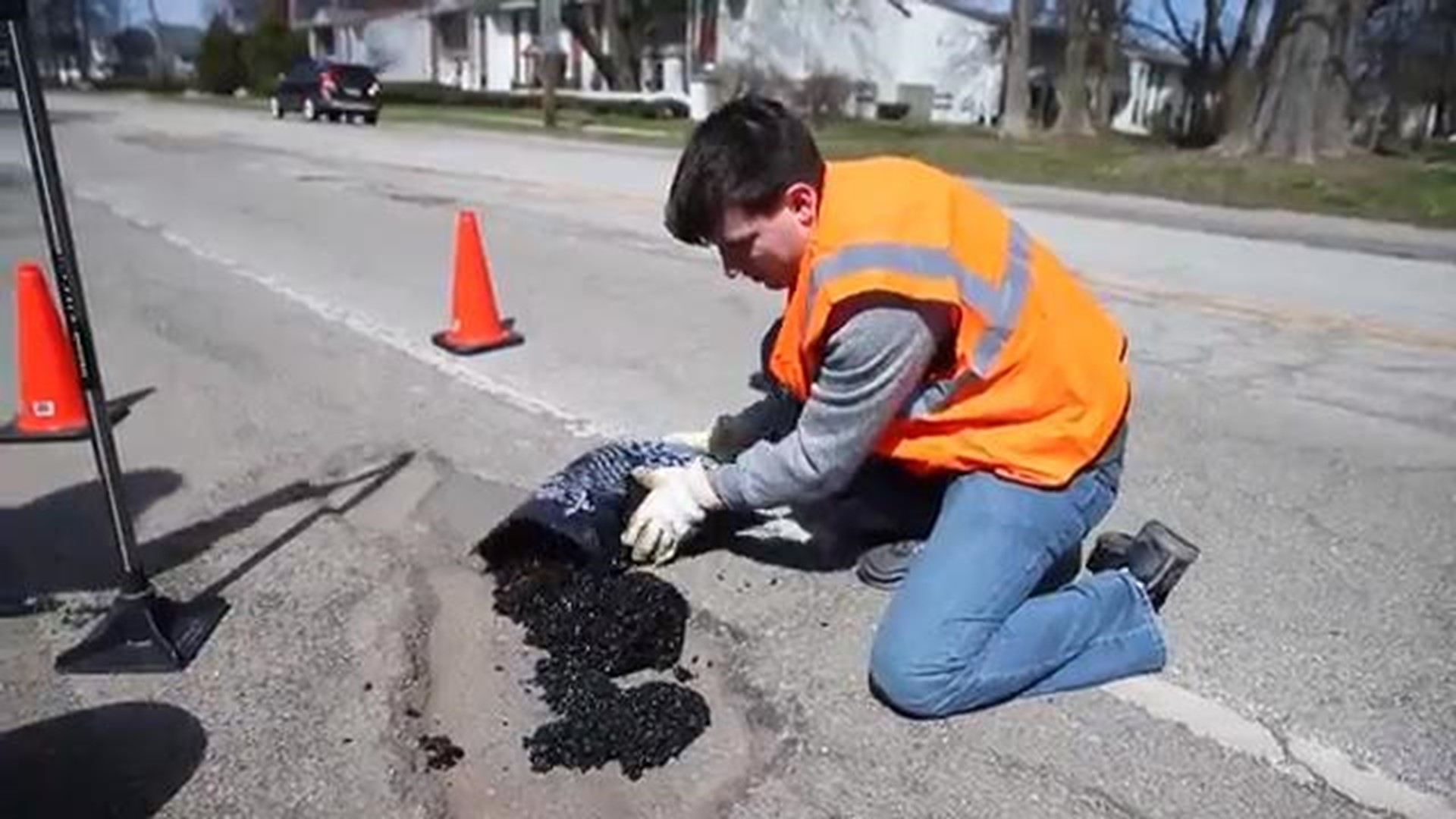 Credit: Jenna Watson/IndyStar
From left, Mike Warren and Chris Lang fill a pothole along 52nd Street at Haverford Avenue in Indianapolis, Saturday, April 7, 2018. The duo began Open Source Roads, a grassroots organization aimed at repairing Indiana's pothole-riddled roads. Warren and Lang feel the city is failing its residents in effectively repairing roads, putting drivers and cyclists at risk. They purchase the materials at local hardware stores, gather friends to volunteer and patch holes on Indy's worst side streets whenever time and resources allow.

You could argue that citizens filling potholes is a popular storyline in Indiana. "Parks and Recreation's" Ron Swanson met his third wife after she complained to the fictional city of Pawnee about gaping craters on her street.

The famously libertarian Swanson, played by actor Nick Offerman, cut through the bureaucratic red tape and shoveled asphalt into the chuckholes himself.

After filling a pothole near 52nd Street and College Avenue on Saturday, IUPUI student Chris Lang laughed about the episode, which aired on NBC in October of 2012.

"I even have a Ron Swanson poster up," Lang said of his apartment decor. "I like him a lot."

In fact, some of Swanson's libertarian beliefs overlap with those of Lang, 22, and Mike Warren, 28. The duo created Open Source Roads, a grassroots organization comprising volunteers who fix Indianapolis' pothole-riddled streets. Open Source is a call to action that's built upon action itself. Warren and Lang — and sometimes up to five of their friends — spend their spare time fixing some of the worst chuckholes on side streets.

"We want to fill a lot of potholes, and we want people to help out and see that we don't need to rely on this monopoly for it, and I want that to be what starts the people in charge talking about change," Lang said.

"If the city is going to fail at their own monopoly, why should they have that monopoly?" he said.

A Department of Public Works audit rated the city's roads poor and said it would take $732 million to upgrade them to fair condition, according to an IndyStar report. In March, Mayor Joe Hogsett put $14.5 million toward the problem. Wildly fluctuating temperatures and harsh winter weather have led to deeply pockmarked roads that have destroyed enough tires, rims and other auto parts to make repair shops work overtime.

More: The scary, hidden damage potholes can do to your car

More: Potholes got you down? Have some free ice cream

Warren and Lang do not have a permit for what they're doing, but they said the city and police officers have not tried to stop them.

Betsy Whitmore, chief communications officer for the Indianapolis Department of Public Works, said in an email that obtaining a permit to work on city-owned streets and right-of-way is important so that the city knows what's going on with public infrastructure. The city's hotline to report potholes is 317-327-4622, or residents can visit maps.indy.gov/RequestIndy.

Warren said Open Source has filled seven potholes around the city so far in 2018 and more than 100 in 2017. The two work when they can — Lang between classes as he earns a bachelor's degree in mechanical engineering and Warren between working for Uber Eats and software development projects.

So far, Lang estimates they've spent between $800 and $1,000 for tools and asphalt. Part of the money has come from their own paychecks, donations and their Go Fund Me, titled "Campaign to fix MUH ROADS," he said.

The two started Open Source in April 2017 after Warren saw a video of anarchists in Portland patching their city's streets. Portland Anarchist Road Care is filling potholes and stating that capitalism and government are not necessary for society to function, according to The Oregonian.

Lang and Warren said they are not anarchists and do not want to replace the Department of Public Works, but they thought a similar grassroots repair effort would help solve the problems on side streets and call on the city to provide better service. So they researched how to repair potholes online. The name — Open Source Roads — is a nod to the way developers contribute to coding software, like WordPress, that anyone can download and improve.

Credit: Jenna Watson/IndyStar
Mike Warren and Chris Lang shovel asphalt into a pothole along 52nd Street at Haverford Avenue in Indianapolis, Saturday, April 7, 2018. The duo began Open Source Roads, a grassroots organization aimed at repairing Indiana's pothole-riddled roads. Warren and Lang feel the city is failing its residents in effectively repairing roads, putting drivers and cyclists at risk. They purchase the materials at local hardware stores, gather friends to volunteer and patch holes on Indy's worst side streets whenever time and resources allow.

Warren, who studied computer science at IUPUI, is developing a website and apps for Open Source that will coordinate volunteers, map the potholes and update immediately after the patches are done. One app, for example, will help the volunteers take measurements of the holes and figure out how much asphalt is needed to patch them, he said.

Around noon Saturday, Lang and Warren dumped a bag of asphalt into a pothole at 52nd Street and Haverford Avenue. After smoothing it and packing it firmly with a tamper, they scraped the extra crumbles from the tools into a bright green Menards bucket. One bag of pothole patch costs them $7 and fills 5 square feet at one inch deep, Warren said.

The duo wore fluorescent safety vests and arranged cones around their work area. Cars flowed around them. Lang said they often receive support from drivers, who have given them food, water and even cigarettes. To stay safe, the duo fixes chuckholes on side streets during times when traffic is light.

"While it seems like 2 people can actually fill potholes, there is a supporting group to protect workers from traffic. This can include extra staff to hold warning signs for drivers and a driver of a 'blocker' truck to provide a barrier between pothole-filling workers and traffic. ... Typically, DPW pothole-filling crews consist of 5-6 people," Whitmore wrote in an email.

Lang responded that they have not worried about being hit while patching the roads.

"I usually feel more unsafe driving than I do working on the roads," Lang said.