'Palaces compared to what they were': Portland trailer park residents get new homes

The Oak Leaf Mobile Home Park in the Cully neighborhood has been transformed from dilapidated trailers to energy-efficient manufactured homes. 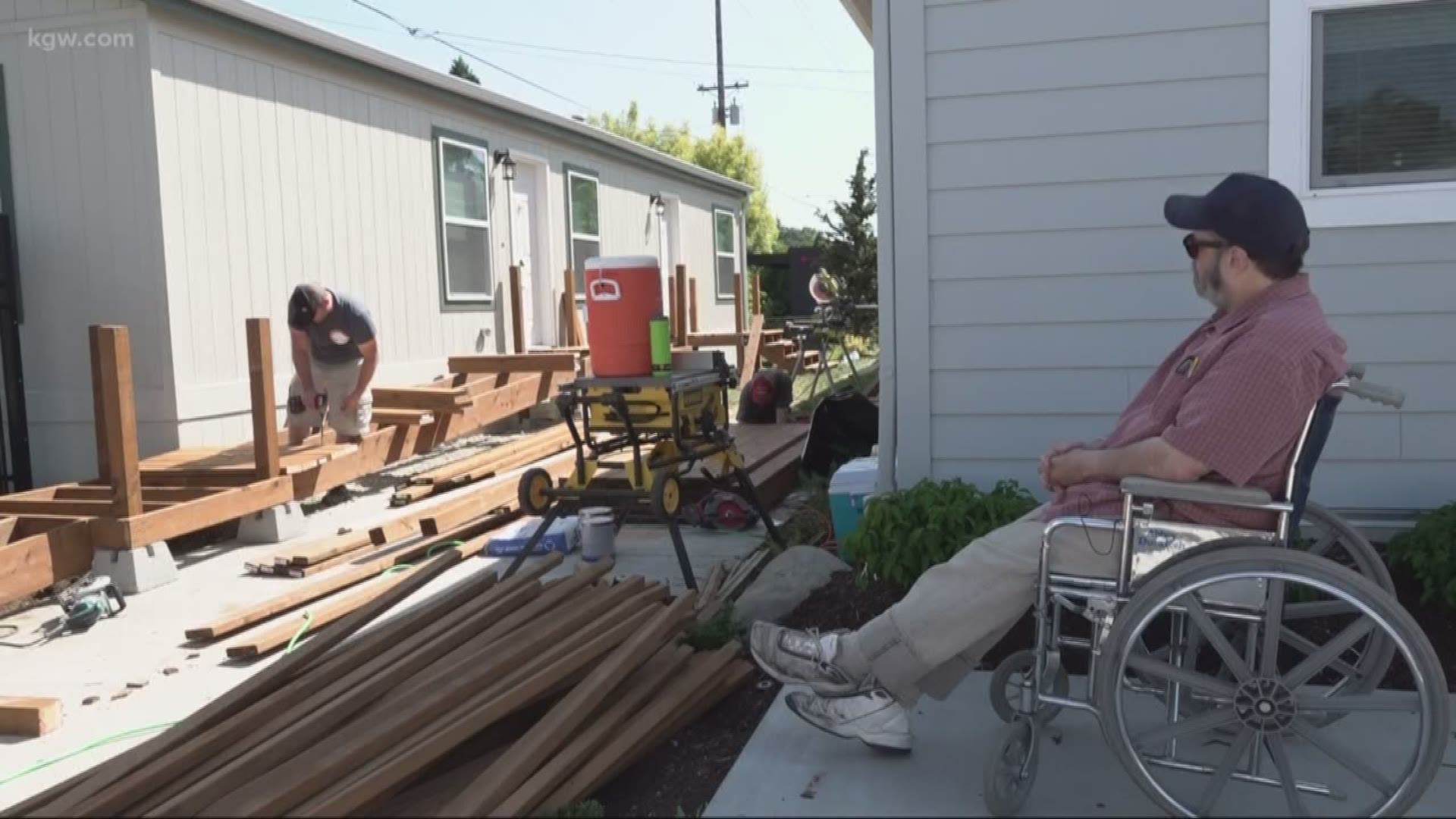 PORTLAND, Ore. — Inexpensive housing in Portland is hard to come by these days.

That's why three years ago, people who live in the Oak Leaf Mobile Home Park fought so hard to save their homes, as the Cully neighborhood gentrifies all around them.

Mobile home parks like this are some of the biggest - and last - stocks of affordable housing in the state.

Not only do residents get to stay there, but their old, neglected trailers are being replaced with new and improved manufactured homes.

People who live at what's now referred to as Oak Leaf Park, rather than Oak Leaf Mobile Home Park, stood alongside neighborhood groups, churches, nonprofits, and government agencies to keep this park standing.

"This is a dream come true. I know that term is used a lot. But this is a dream come true,” Johanson said. “When we were told we were going to be displaced, put out on the street, the main word was fear. Because I, myself personally, I had no place - absolutely no place to go. I would have been on the street. So just to be able to see this; it’s like it’s been resurrected into something that’s beautiful. I mean these are like palaces compared to what they were.”

Back in 2016, Oak Leaf residents found out the park’s owner was planning to sell it to a developer. It was in bad shape. The trailers were dilapidated and many were dangerous.

Credit: KGW
What the mobile home park used to look like

Johanson said his metal trailer was so old that The Beatles were still together at the time it was put there The trailer hadn’t ever been updated and didn’t have carbon monoxide or smoke alarms in it.

He said the park had drug issues and there was no security because there wasn’t a gate.

“The house prices here around the neighborhood have been going up incredibly. Just the rate that they’re going at, it’s just unaffordable for most of us that have been here for so long,”  Living Cully housing organizer Mayra Torres said.

So, residents banded together and mobilized. Local churches and nonprofits jumped to their aid. They took to the streets and marched to raise awareness, and they took to City Hall to plead with commissioners for help.

Torres said it was empowering to see residents and supporters jump into action and put in the time and energy it took to keep Oak Leaf Park a part of the Cully neighborhood, and keep residents housed.

“It was a small movement from a small community that decided to stand together and the neighbors and community saying we're here for you. And then spreading out the word to make sure everybody knew this was going on, that we wanted this park to be here and we needed for our neighbors to stay here,” Torres said.

The city stepped up with a loan and neighborhood nonprofit Living Cully initially bought the park.

“When that came across [executive director Terry McDonald’s] desk, knowing the population here was already at risk of displacement and already knowing this neighborhood’s past history of displacing folks, Terry stepped in and wanted to make it a nice relaxing place for people to come home to, affordable housing, and not be displaced,” said Oak Leaf’s new property manager Jordan Griffin-Henderson..

Over the past year, St. Vincent de Paul of Lane County has worked with contractors to gut the park. They transformed it by working with county and state organizations to replace dilapidated trailers with energy efficient manufactured homes.

Crews had to replace the sewer and water lines, put in asphalt, and add landscaping to the property.

People who live here have been staying in housing or motels around town since work started. So far, 11 tenants are moved back in and more houses still need to be delivered and set up. The goal is to get folks moved in by the end of August.

Griffin-Henderson said St. Vincent de Paul is also providing a social service coordinator to residents to ensure they have what they need for transitioning back in. Different organizations have donated cleaning supplies, food and gift cards for residents as well.

“Handing keys over to folks during inspections and seeing them see their new homes for the first time, that joy and excitement that they have a home that’s energy efficient, clean, brand new, their appliances are brand new, they don’t worry about anything breaking,” Griffin-Henderson told KGW.

“It just goes to show what can happen when people put their minds and hearts in the right place and do something positive for the community and area here,” Johanson said.

The Oregonian reports there are 66 mobile home parks in Portland, representing more than 3,200 homes. Now, any zoning change relating to an existing park would need city council to sign off.