This Thanksgiving Cougs fans have a lot to be grateful for, and it's certain that they're thankful for their quarterback, Gardner Minshew. 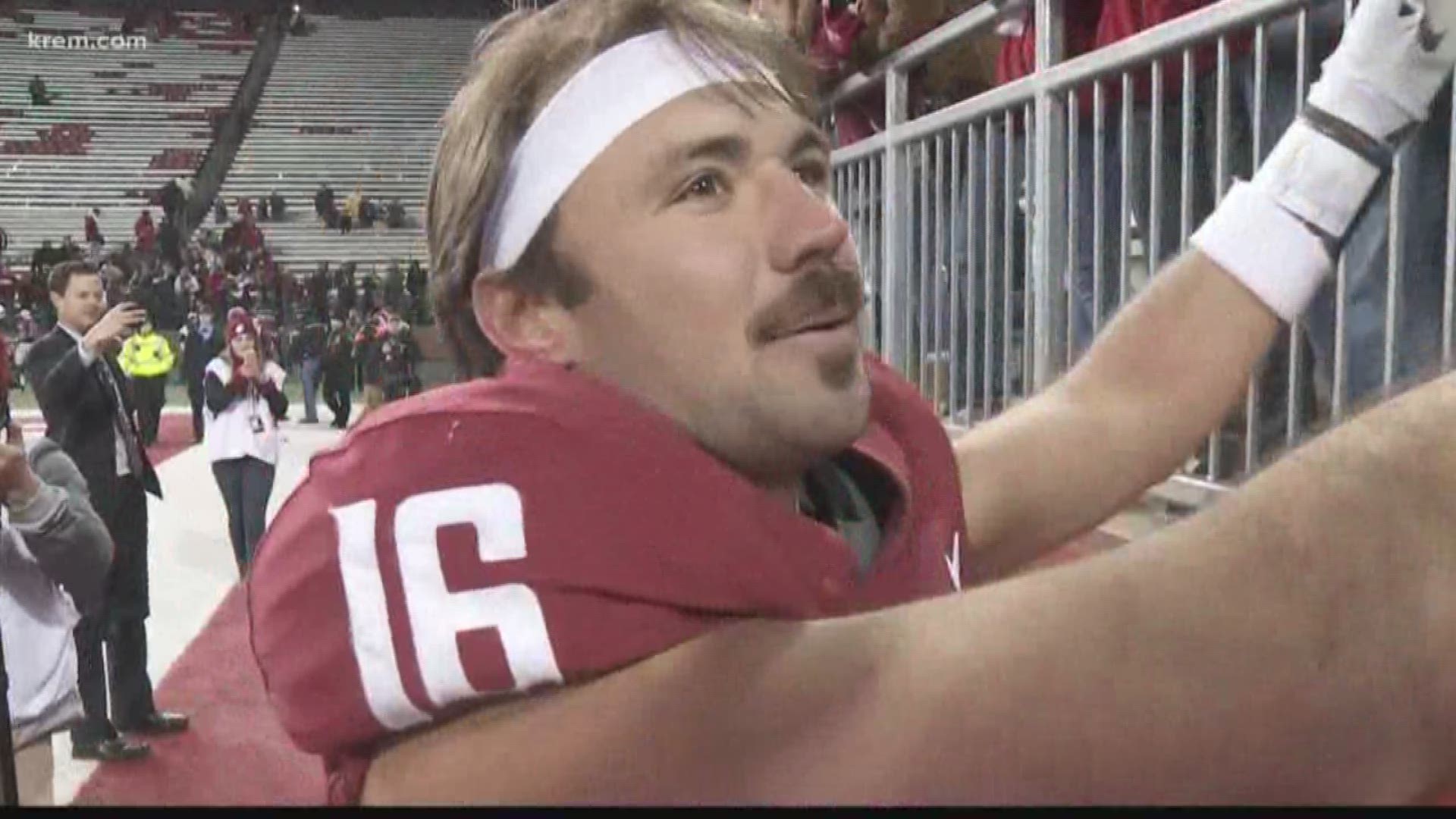 SPOKANE, Wash. — This Thanksgiving Cougs fans have a lot to be grateful for, and it’s certain that they’re thankful for their quarterback, Gardner Minshew.

However, there are four people who know Gardner a little bit better than Wazzu fans do, and they certainly have a lot to be thankful for over the last few months as well.

“I always come home like, ‘You aren’t going to believe all these people wearing mustaches,’” said Gardner’s father Flint Minshew.

It’s been a whirlwind football season for the Minshew family.

“It just makes me so proud for him,” said youngest sister Callie. “It’s crazy to see him out on the big screen putting up numbers like he is.”

“I have friends from Chicago, New York, and they all have stories of their dads calling them being like, ‘Do you know Gardner Minshew? I know he’s from Mississippi, so you might go to school with someone that he knows,’” said middle child Meredith.

The quartet have watched Gardner Minshew’s fever for football from a young age.

“We’ve watched him work hard since he was eight years old. How seriously they took the Peewee football in the beginning,” exclaimed Meredith.

“When he comes home there’s going to be a piece of paper somewhere with X’s and O’s left around the house. If you go up in his room, there’s plays everywhere. It’s always been that way,” said Kim, a former Mississippi State basketball player.

That work ethic is now paying off on the national stage.

“A lot of people go, ‘Oh you must be proud of him.’ We’ve always been proud of him. He’s always worked his tail off,” said Flint. “We’re just so happy for him because we’ve seen it. We know how hard he works.”

Another group of people who know how hard Gardner has worked?

“They keep saying things like, ‘Now the rest of the world is seeing what we’ve always known.’ They’re very supportive,” said Kim.

“We had a spirit week day at the high school and middle school that was Dress Up Like Gardner Minshew Day. Everybody dressed up in mustaches and Washington State gear, aviators, caps on backwards,” said Callie, the reigning Gatorade state volleyball player of the year in Mississippi. “It was crazy going into the high school seeing teachers dressed up like my brother. It was kind of weird, but to know that he has that much support? It was kind of heartwarming.”

That support isn’t just in Brandon, it’s spread across the state.

“People are freaking out because they know he’s from Mississippi because they call him the Mississippi Mustache,” said Meredith. “They’re like, ‘We don’t personally know him, but we feel like we do so we’re going to support.’”

It’s safe to say many Mississipians didn’t know much about the state of Washington, much less Washington State, before Gardner became a household name.

I said, ‘Okay, well where’s Washington State?’ And he said, ‘Pullman.’ I said, ‘Okay, I’ve got to go Google that,’ said Kim during Gardner’s recruitment.

However, when Mike Leach called Gardner earlier this year, well, Gardner sure knew about him.

“When they officially made the offer he committed. It was Mike Leach. He’s followed Mike Leach since he was middle school. He read his book in eighth grade,” said Flint, Gardner’s former Peewee coach.

“When Mike Leach called it was kind of a no brainer. He was standing outside when the call came through, and I could see him outside jumping up and down bouncing on his feet,” reflected Kim. “He was so excited and then he came inside and he was like, ‘That was Mike Leach,’ and I was like ‘What are you going to do? What are you going to say?’ And he said, ‘Well, he asked me if I wanted to come lead the nation in passing,’ and I said, ‘What’d you say?’ And he said, ‘Well, I said yes.’

Mike Leach’s question while recruiting Gardner became fact, but that certainly wasn’t an expectation for the family coming into this season.

Gardner’s family truly means that as his journey through college- which includes stops at Troy, a Mississippi JUCO, and East Carolina- has been filled with ups and downs.

“I think that the path that he’s taken, this crazy path, I do think that it has not only prepared him, but I think it makes him really appreciate everything he has now. I think that just makes him go, ‘You know I’m going to love every day,’” said Kim.

“He’s just being himself,” said Meredith. “When he runs around on the field, or when he sprints to the crowd after the game, you can just tell he’s having the time of his life. He’s never lost his personality through the whole process.”

And that leads us back to that goofy thing on Gardner’s face.

“He’s eating it up,” said Meredith with a grin. “All the videos that he’s doing all of this,” as she motions to him touching his mustache. “I’m like, ‘You’re loving it, don’t lie.’”

He’s loving it, and so is his family.

“He’s chasing dreams, and we’re just having a great time watching. That is what he is doing, he is chasing his dreams,” said Kim.