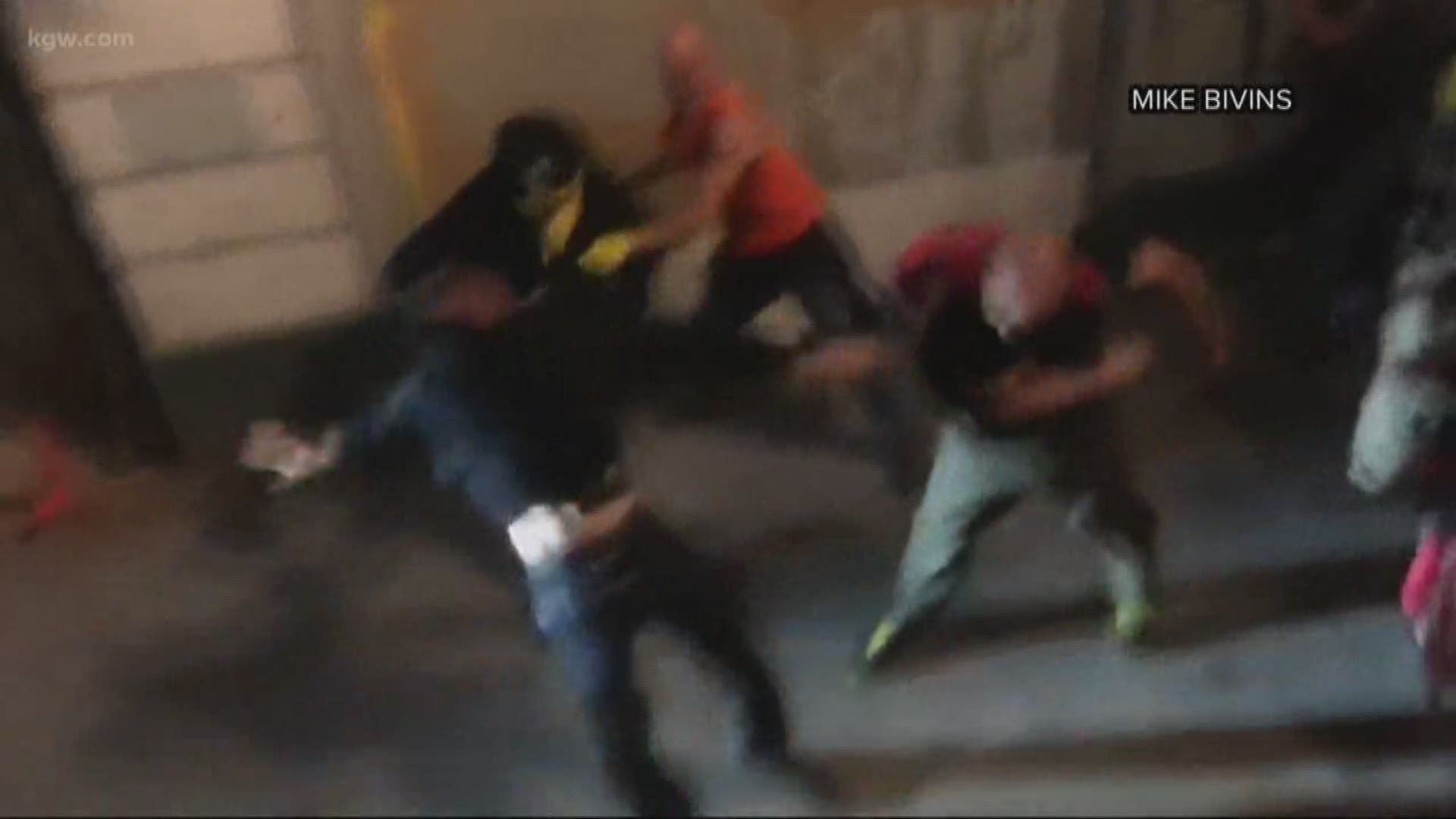 PORTLAND, Ore. — Mayor Wheeler said violence continues to escalate at each event, which is why he is calling for a new ordinance that would allow the police commissioner to decide when, where, and how long competing demonstrations can take place. The law could also restrict how many people could participate. If those restrictions are ignored, people could then be arrested and charged with a misdemeanor.

The president of the Portland Police Association said he is in favor of the new law as long as it does not restrict free speech.

“We don't want to do anything that impedes that free speech,” explained Portland Police Association President Daryl Turner. “However, we want to make sure that citizens feel safe in the city of Portland when protests are going on, both the protesters and citizens just out and about, they want to feel safe and this is one way to ensure that.”

Turner agreed the violence at protests has been going on way too long.

“The hard line needs to be taken, drawn in the sand, and let people know that unequivocally there will be no violence accepted in peaceful protests and if there is, that people will be dealt with by being arrested, by being charged, and by being convicted,” Turner said.

Despite the violence captured on video over the weekend, no one was arrested. The lack of arrests is one reason some say we do not need a new law, we need laws already in place to be enforced.

“The proposed ordinance raises many constitutional concerns. The mayor’s proposal grants broad authority to the mayor’s office to regulate constitutionally-protected speech and assembly with no meaningful oversight for abuse. Perhaps worse than the legal issues it raises, is that this ordinance is being sprung on the public with little notice as an emergency measure that will take effect immediately. This action by the mayor demonstrates a lack of trust in the public and is an end-run around our usual democratic processes. We suspect that this rushed proposal will be met with public outcry and demonstrations. And, inevitably, this ordinance will get challenged in court. To be clear, we already have laws against street fighting and violence.”

Here is each Portland City Commissioner’s statement about the proposed ordinance:

Commissioner Nick Fish said, “My office learned of the Mayor’s intent to bring this Ordinance on Monday afternoon. We all want to live in a community that is safe for peaceful demonstrations. And I agree that recent behavior on our streets has been unacceptable. It’s possible that we need another tool in our toolkit to ensure safety in our public spaces. And time, place, manner regulations may be the right approach. However, I have a number of legal and policy questions about the proposal, which I intend to raise with the Mayor and the City Attorney. I look forward to a broader discussion with my colleagues and key stakeholders before we take any further action.”

Commissioner Amanda Fritz said, “Portland is a community that values civic engagement and is renowned for vigorous expression of opinions in public. The ongoing violence occurring between opposing groups on our streets is not acceptable. In addition to the impacts on downtown residents, visitors, and businesses, violent protests pull Portland Police officers from vital work in neighborhoods throughout the city, endangering vulnerable populations. I appreciate that Mayor Wheeler has invited the Council to set policy on how to address escalating conflict between demonstrators. Any solution must be developed with community input – this is a community issue, and Portlanders are vital stakeholders whose rights and opinions must be considered. The City is responsible for the safety of all Portlanders. We must end these confrontations without damaging free speech and assembly rights guaranteed in the State and Federal Constitutions. I received the draft ordinance from Mayor Wheeler yesterday afternoon and met with the City Attorney’s Office immediately before the Mayor’s press conference. I will work collaboratively with the Mayor and the rest of Council to ensure that we pursue a policy solution that is constitutional, enforceable, accountable, and addresses the needs of our community. While I hope we can find a solution that all of Council can support as early as next Wednesday, I believe the process of reaching that outcome will be crucial to the policy’s success.”

Commissioner Chloe Eudaly said, “My office received the Mayor's proposed ordinance on increasing power for the Police Commissioner to regulate time, place, and manner for demonstrations two hours before the press conference that just took place. This did not afford us enough time to review or meaningfully discuss the policy thoroughly. I share the Mayor’s concern and the public’s frustration with these violent and disruptive demonstrations. However, as a strong advocate for freedom of speech, expression, and assembly I am very reluctant to support a policy that could infringe in any way on these essential constitutional rights. I do agree that we need to create a strategy to prevent groups intent on spreading fear in and provoking violence from harming our residents and disrupting and doing damage to our city. There is a legitimate balance to be struck between public safety and free speech. In my view, this begins with an acknowledgment that in our city, although our policies must be content-neutral, it is far-right extremists and hate groups who are necessitating these measures. I look forward to a thoughtful discussion with advocates and community members as well as my colleagues to ensure we are taking all critical concerns into account and that we come up with the best policies to manage the unique challenges we are facing as a city.”

Commissioner Dan Saltzman said, “The current situation is untenable and strong action must be taken. With the street brawls and violent scrums, we have seen occurring in downtown Portland over the past 2 years, action is needed as it is just a matter of time before lives are lost. I fully support Mayor Wheeler’s effort to take this action and believe his proposed ordinance is an excellent proposal to best accommodate public expression and promote order. The U.S. Supreme Court has repeatedly ruled that local governments may place reasonable restrictions on the time, place, and manner of individual expression and this must be done sooner rather than later. Let us dispense with long protracted debates that will consume a lot of oxygen and lead us nowhere. Let’s take this reasonable action to protect all who live work and play in Portland.”

Joey Gibson, the leader of Patriot Prayer held a press conference late Tuesday. When asked if he would follow the restrictions of the new ordinance he said, “We'll see what they are specifically, there's definitely certain things that I am willing to go to jail for as if he says I can't go to a certain spot.”

The ordinance will go before the city council in the next few weeks.