OHSU is in charge of the site and says several factors played into the unfortunate backup at its drive-through clinic at Portland International Airport economy lot. 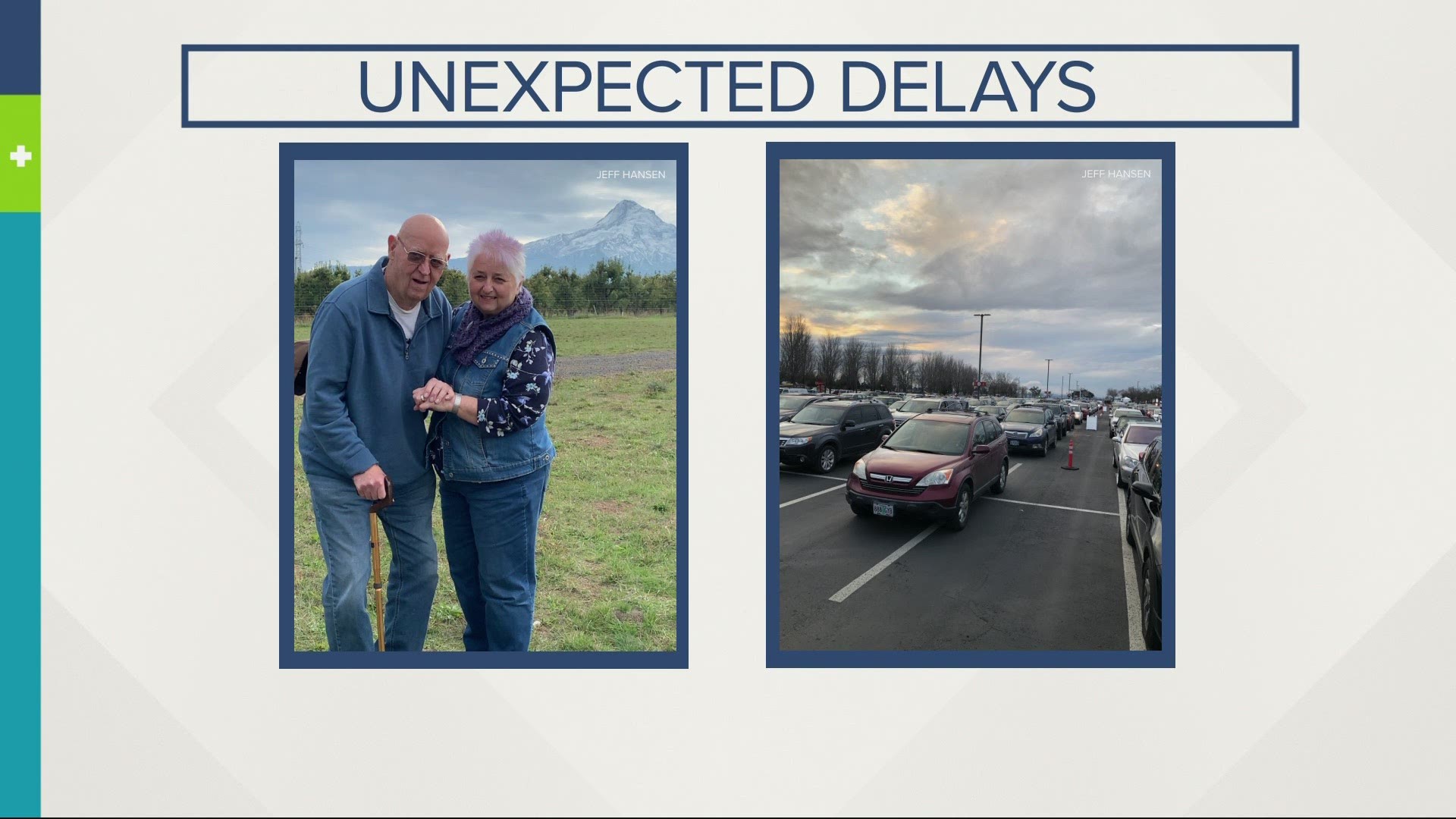 PORTLAND, Oregon — The drive-through mass vaccination clinic at the Portland International Airport opened in late January. Since then more than 40,000 vaccinations have gone into arms at the PDX economy parking lot.

This weekend the sun shone through at times Sunday, and operations seemed pretty smooth before noon. But Saturday, March 6, was arguably the toughest day so far. Some people tell us they waited a very long time to get through.

“We knew it would be a little of an experience but it ended up a three-hour ordeal, which nobody seemed prepared for,” said Jeff Hansen of Portland.

Hansen helps care for his father Nils, along with Nils' wife Marge. Nils has mobility issues and has trouble being on his feet for long, so Jeff drove them to PDX for a 4:30 p.m. appointment. He said they joined hundreds of cars, waiting.

“And so lines would move, people that seemed to arrive behind you would go in front of you, and again I think the lack of communication frustrated a lot of people (thinking) are we in the right space why are these people going when we’re not,” said Hansen.

OHSU blamed the wait times on unexpected delays during the afternoon shift change, and patients arriving early or late for appointments.

"We apologize for any inconvenience and distress the longer wait time may have caused... No patients were turned away, and the registration, vaccination and monitoring teams stayed on-site Saturday evening until everyone scheduled and waiting for a vaccine received one."

Jeff Hansen appreciates the work of the crew, including lots of Red Cross volunteers He also appreciates that Marge was able to get her vaccination Saturday, instead of having to return for a Sunday appointment.

The wait though was rough.

“The volunteers were great, but there was no communication about what was going on ahead of you, how long that wait was expected to be, so basically it was just a pile-up," said Hansen. "People were very frustrated because it was a lot of seniors and people with mobility issues at that location.”

Despite the trouble, OHSU says 5,766 people got vaccinated on Saturday and about 5,600 were expected to get a dose Sunday.

When the clinic started organizers said it could work up to vaccinating as many as 10,000 people a day. An OHSU spokesperson said today that was still possible, but that it would take more parking lot space and a reconfiguration of the system to accommodate a larger operation.