For the first time, footage of 'Galloping Gertie's' collapse from the Gig Harbor side is being shown to the public. 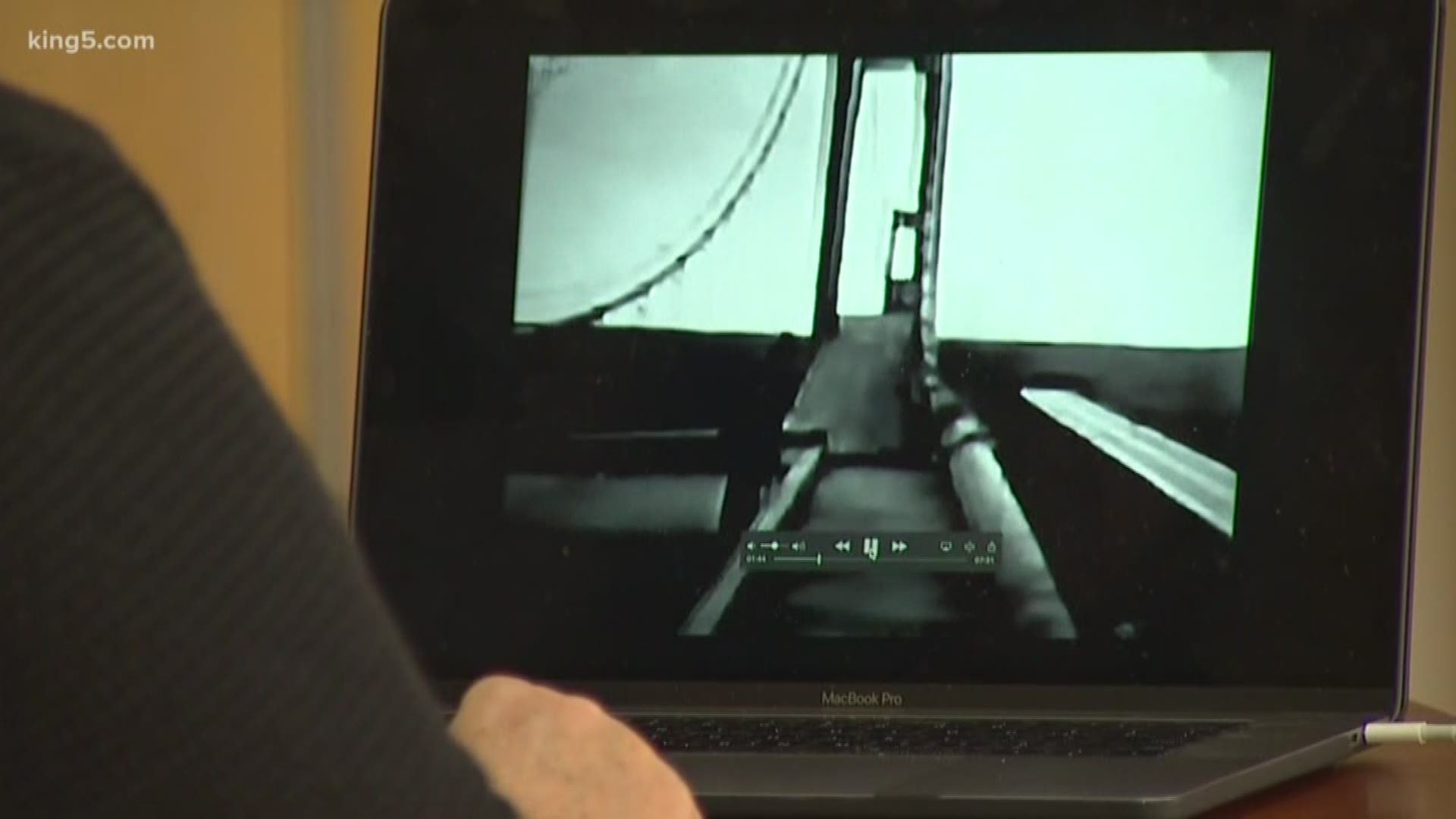 GIG HARBOR, Wash. — The only known footage of the collapse of the first Tacoma Narrows Bridge from the west side of the channel is being shown to the public for the first time.

The 7:30 minute video of the bridge known as "Galloping Gertie" is believed to have been taken by Arthur Leach on Nov. 7, 1940.

According to the Harbor History Museum, it is the only known footage taken from the Gig Harbor side of the bridge.

“This is amazing because we usually see it from the Tacoma side, not the Gig Harbor side,” said Stephanie Lile, director of the Harbor History Museum. “It’s shot close to the bridge, so I can see the towers, the hanging bits of road. The splashes in the water below. It’s incredible.”

They believe Leach projected the aging film sometime in the 70s or 80s and shot it back onto tape with some narration. That audio is now valuable to historians as he describes the footage.

It was donated to the museum by Samara Kezele Fritchman and Kyle Fritchman. The museum now has a digital copy of the tape.

Before sharing it with the public, Lile worked to authenticate the footage - and she believes it to be the real deal. She said her research found Leach was a civil engineer turned toll collector on the bridge. He also served as a caretaker for the span. 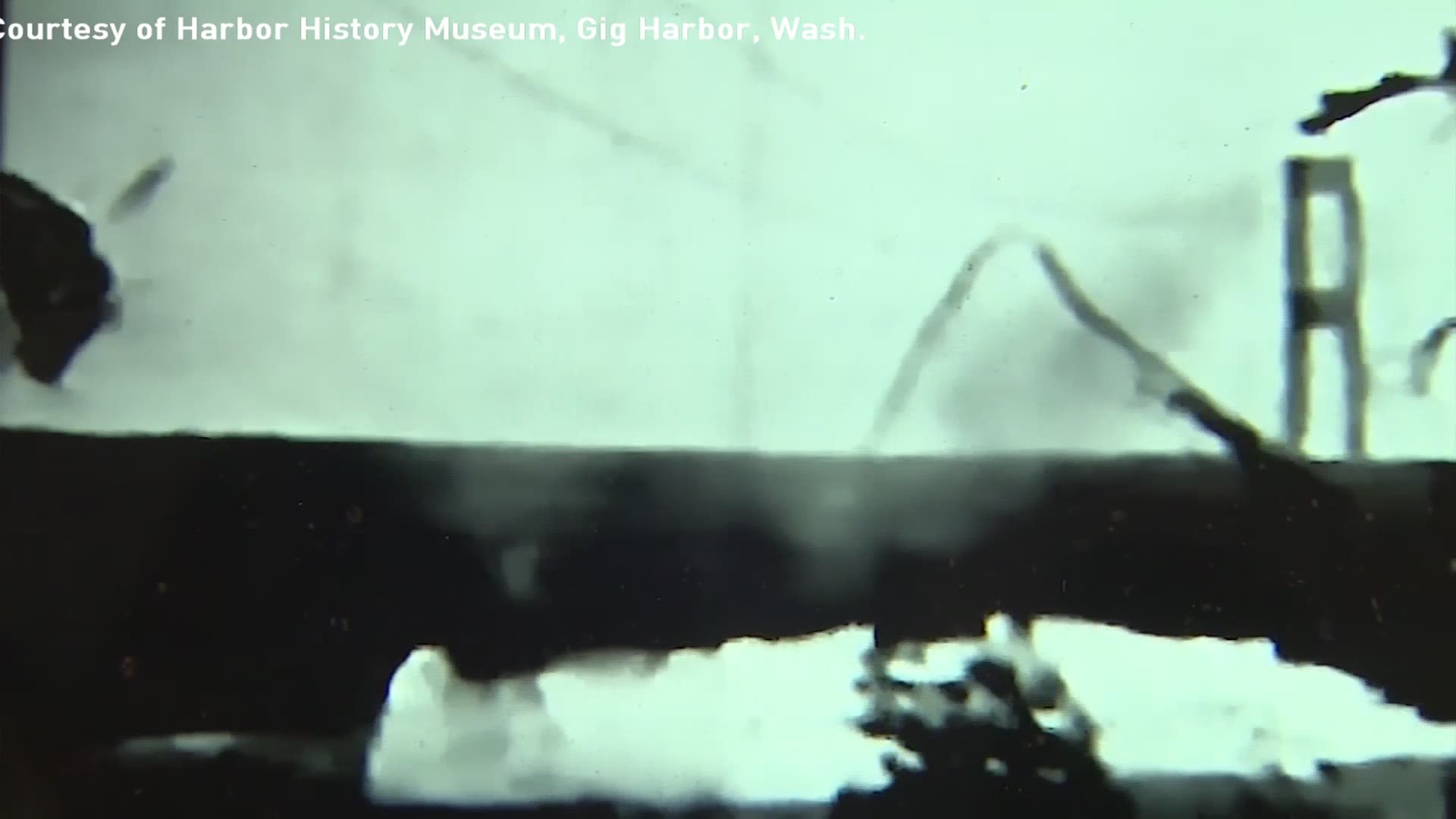 “We get a little bit of narration from Arthur Leach who was the fellow who originally shot the 8mm,” Lile said. “So, by getting his commentary we’re getting that kind of toll collector, state highway department point of view that would be totally lost if he hadn’t done that.”

She theorizes he was on the Gig Harbor side to prevent travelers from crossing the swaying bridge. That likely means he was one of the last people to cross it to the west.

The footage also shows him climbing on the stricken approaches of the bridge after it failed, she said, describing how they would use jackhammers to relieve the tension on the remaining structure.

The museum also has original engineering documents and blueprints from the bridge. They say this new film helps support their other exhibits - which include several twisted girders from the original span.

“When you see these massive chunks of roadway just literally crash into the water – that changes your perspective of what a bridge does, what it’s about – and how can these feats of engineering crumble to bits,” Lile said.

The History Museum has sold out three showings of the footage - Feb. 26, March 6, and March 19. The museum plans to schedule a fourth showing, but a date has not been decided.

The Tacoma Narrows Bridge, nicknamed "Galloping Gertie," fell into Puget Sound during a windstorm in 1940. The bridge's collapse was a lesson in poor design and engineering. The cause of the bridge failure was determined to be the solid girders, which took wind and acted like sails. Also, the bridge was not stiff or heavy enough to withstand the wind of the Narrows.

One dog died in the bridge collapse. There were no other deaths associated with it.