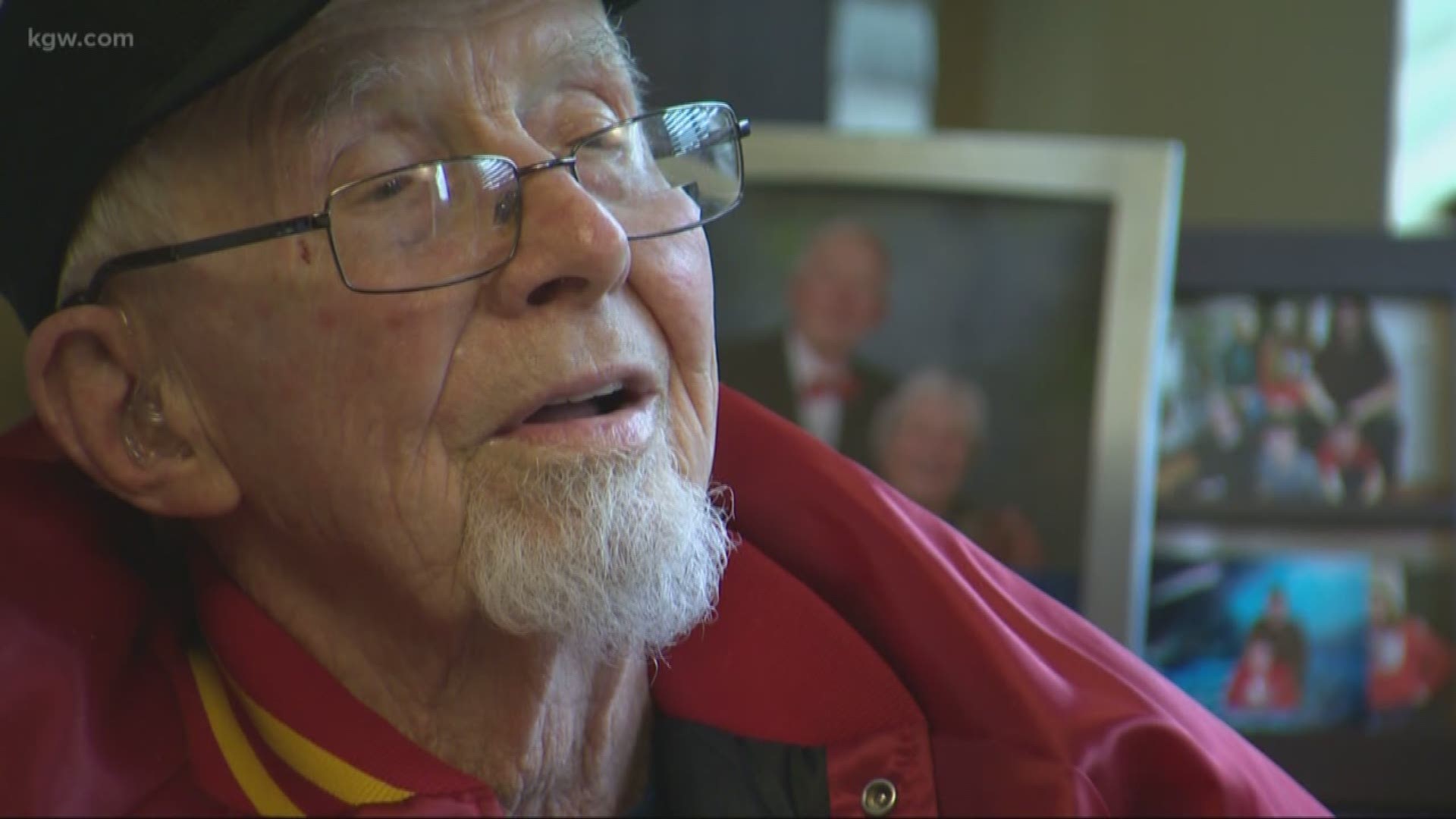 CORVALLIS, Ore. — “I got stories I could tell ‘til hell freezes over,” 94-year-old Robin Barrett mused.

Barrett was only 17 years old when the Japanese attacked Pearl Harbor and drew America into World War II. He asked his mother to let him join the Marines and a few months later he was learning to jump out of airplanes.

On the very first flight, instructors would test the Marines to see if they would really jump, catching them just before they stepped out of the plane.

“My turn came, I hooked up, came down, made a right turn, hit an air pocket, they missed me and I was gone! With no instructions on what to do or how to do it or a darn thing! What happens when the ground comes up to meet ya!" he said. “These two big ugly guys were supposed to catch me. When I got down they said how many jumps have you made? I’ve never jumped in my life before and I don’t think I jumped this time. I fell out!”

He survived and became a mortar man. The job meant carrying the heavy base plate used to anchor a mortar tube. One day in combat,  it saved his life.

“It weighed 82 pounds ... solid steel. At the end of the day, somebody very politely said to me, 'Oh Rob, what happened to your baseplate?' Nothing happened to my base plate! [They told me to] flip it over and take a look at the bottom. You could see where a machine gun had walked right across that sucker. And you know whose head was right behind it? Close, yeah. Lots of close ones. Survived the whole damn bunch of 'em," Barrett said.

In 1945, he was part of the U.S. assault on Iwo Jima, a heavily fortified island the Japanese used to issue early warnings to their mainland when American bombers approached.

It proved a terrible fight with 2,400 Marines killed trying to capture the heavily-fortified island.

“Yeah, everyone was scared. I didn’t find any atheists anywhere! They were in short number if there were any! It was all, 'Save me God, God save me, please!'" he said.

Thousands of Japanese died as well. Barrett lived through some awful nights.

He remembers later watching as the historic and iconic flag raising took place on Mount Suribachi, the highest point on the island at 554-feet.

“Just on the side of the dog gone hill and I took a look at the top and I saw a bunch of activity up there and all of a sudden I saw the itty-bitty flag, that’s the first that went up. The one hardly anybody knows anything about because it was just a war-torn flag and it was a small one,” he said.

Later, he saw the bigger flag raised. That’s the picture you’ve probably seen. It became one of the most iconic moments, and images, of World War II.

“Just after I saw it go up, I was in a big crater hole and I just rolled over and I had a talk with the skipper. And I said, 'Guy, just get me out of all this damn foolishness and ah, you know, if you ever need me give me a call,'" Barrett said.

The ‘skipper’ he referred to was God.

Thirty-nine years later, he felt that call and became an Episcopal priest in the small town of Bonanza, east of Klamath Falls, Oregon.

Along the way, he and his wife raised three sons and a daughter. Barrett worked as a printer, dedicated decades to the Veterans of Foreign Wars and later the Scouts.

These days, his time is spent at the Veterans Home in Lebanon. Marvel, his wife of 66 years, recently died. Her final days were in a memory care center. Barrett visited her every day.

Now, he starts most mornings riding a four-wheel scooter to the school next door, where he volunteers to green children.

“I’m in pretty good shape for the shape I’m in!” he laughed.

Life holds a slower pace now, but Barrett keeps the same optimistic outlook that’s served him well through the years.

He’s also held on to his willingness to serve and to share the stories and lessons from his extraordinary life.

“You’re a living piece of history,” I said.