A new study by the Kaiser Permanente Center for Health Research shows some of the health impacts on the general population from using tear gas. 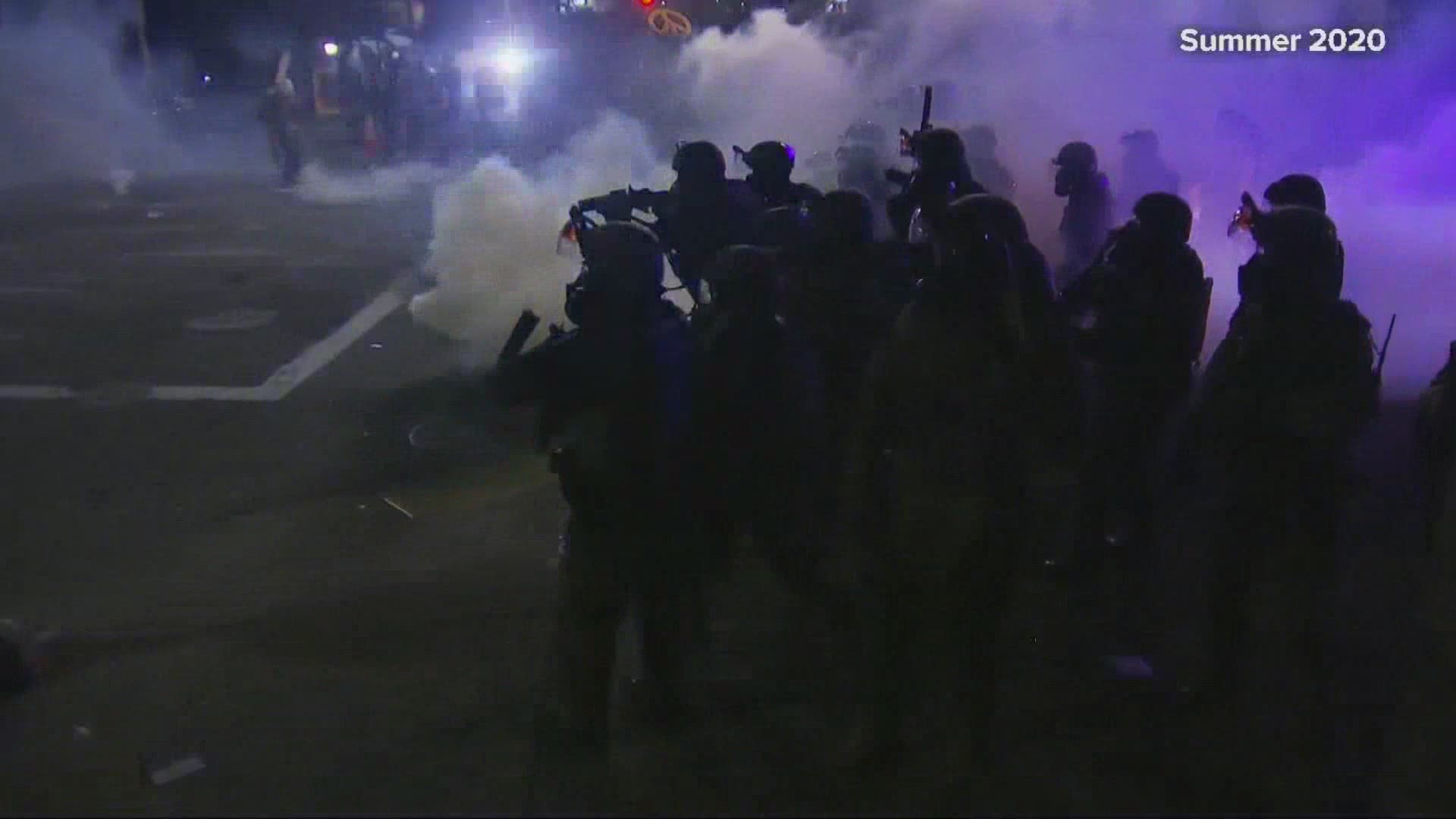 PORTLAND, Ore. — Tear gas or CS gas was sprayed in downtown Portland by Portland police officers more than 100 times in summer of 2020 and is continued to be used by federal agents at the protests in front of the Immigration and Customs Enforcement (ICE) building.

The Portland Police Bureau has not used tear gas as a form of crowd control since August 2020.

Both agencies said they used the gas to disperse crowds and stop violence.

Thousands of people in Portland breathed in the gas over the last year and many of those people never went to a protest but lived or worked nearby.

A new study by the Kaiser Permanente Center for Health Research in Portland shows some of the health impacts on the general population from using tear gas, including reported changes to menstrual cycles of hundreds of people.

“Why would you think that a poison meant to blind people, meant to make people's tear ducts like have reactive issues would just be fine after it dissipates?” asked Liv Vasquez, who said she was exposed to tear gas last summer.

She did not attend the protest but lived in Southeast Portland on Morrison and 12th Street. She said officers used tear gas in her neighborhood and a mile away in downtown.

Vasquez said breathing in the gas caused changes to her menstrual cycle and intense pain.

“I was literally doubling over and feeling like I need to lay down or be in a ball basically because I was having such bad cramps and I had never experienced menstrual pain like this before. And to have the spotting as well was really concerning to me,” said Vasquez.

Jen Moondancer said he was also exposed to tear gas in the summer of 2020 not at a protest but by being in downtown Portland several times a week attending school.

The Army veteran was familiar with tear gas after going through basic training.

“I could definitely smell it in the air outside, in the Pearl district and downtown. I'm very familiar with the scents. I went through gas chamber training in the military a few times,” said Moondancer.

She said she also experienced menstrual changes this past summer.

“My cycle would get much heavier. I would bleed profusely, the pain was extreme and I would get really bad headaches, which was something I didn't really get before."

Moondancer, who also has some other health issues, ended up getting a hysterectomy.

“It is something that is used during war. It is not a war. So why are they using it,” said Moondancer.

Researchers at Kaiser Permanente Center for Health Research heard these same reports and wanted to study the impacts of tear gas on the general population.

“The most research that we have on tear gas is from many years ago and often conducted by the military and mostly on healthy men,” said lead researcher Britta Torgrimson Ojerio.

Kaiser surveyed more than 2,000 people of various ages and health conditions about the impacts of tear gas in Portland.

94% of the 2,200 who responded to the survey reported a health impact from tear gar, and more than 1,200 people sought out some type of care after being exposed.

“Another key finding, very important finding with the menstrual irregularities that were published," said Torgrimson Ojerio. "So, of people that could potentially menstruate or had a uterus, more than half, 54.5% of those people reported some change."

The survey showed people reported feeling these effects days or weeks after being exposed.

“And there were things that didn't start really occurring until a day or two after. Even severe headaches, gastrointestinal issues for people, brain fog, fatigue, you know, and then of course the reports of menstrual changes,” said Torgrimson Ojerio.

Torgrimson Ojerio hoped the report is a call to action for the scientific community to better understand what tear gas can do to the body.

“I mean, this is Portland where we weren't even salting the roads like three or four years ago when we had a huge snow storm because of the environmental impact," said Vasquez. "So, you're worried about the fish and the runoff. How are you not concerned about poison or what health impact is has on the environment and the people living in this environment?"