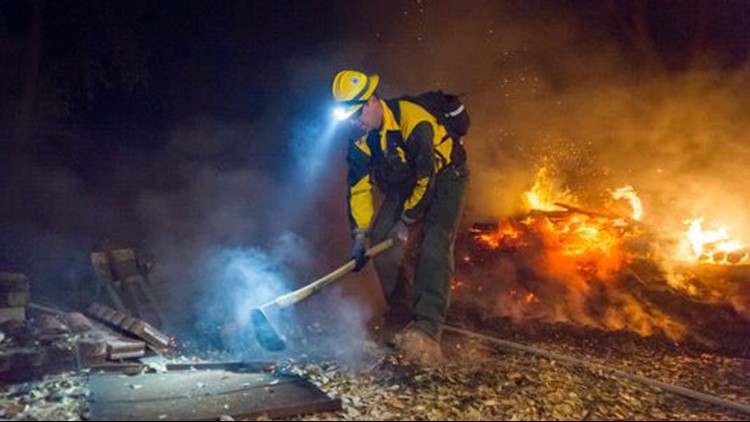 Woodburn firefighter Jon Koenig was supposed to leave for New Mexico this month to celebrate his 20th wedding anniversary.

Instead, Koenig and 21 fellow Marion County firefighters sifted through ash and rubble where Paradise, California once stood, recovering bodies and trying to save what few buildings remained.

"We had plans," said his wife, Lynne Koenig, but "it was a no-brainer ... they needed him more than I did."

Woodburn Fire District was one of five agencies in the Marion County Taskforce — one of 15 Oregon strike teams — that deployed to California to battle the more than 150,000-acre Camp Fire near Chico. Most started returning this past week.

After igniting Nov. 8 in the Sierra Nevada foothills, the blaze exploded into a roaring inferno, whipped by wind gusts down Camp Fire Road in Butte County and into Paradise, a town of 27,000.

At its peak, the fire swallowed the equivalent of 60 football fields per minute.

By Friday, the Camp Fire had claimed at least 84 lives with more than 500 people unaccounted for.

It took nearly 400 fire trucks, 17 helicopters, more than 4,700 firefighters and a series of rainstorms before the fire was declared out on Friday.

Mike Rusher and his team from Polk County Fire District 1 spent their first few days searching for bodies across two square miles of Paradise and 500 properties.

"When something burns really hot, you get white ash," Rusher said. "The whole town was pretty much white ash."

The crew of four stuck together at all times, constantly checking on each other. The hardest part, mentally, was seeing the devastation, he said.

"You were always on the edge," Rusher said. "It was a fear of the unknown. You'd search one property and you'd be relieved you didn't find anything. But you were always asking, 'What am I going to see?'"

The wildfire ravaged Paradise in about three hours, knocking down telephone poles and wires and leaving piles of rubble where a hospital, grocery stores and homes used to be.

Fighting burning eyes and raspy throats, Koenig and his team spent their first 24 hours searching street by street for signs of life.

"It was like coming into any ordinary suburban neighborhood you could think of," he said, "except nine of the 10 homes were completely burnt to the ground."

Koenig was the engine boss. His team consisted of apparatus operator Scott Mateson and firefighters Joe Jacobucci and Brandon Madura.

The Marion County Taskforce was made up of crews from Mount Angel, Woodburn, Jefferson, Silverton and Marion County fire districts plus the Salem and Keizer fire departments.

Their days were scheduled in blocks — 24 hours on, 24 off. While off-duty, Koenig's team retreated to a Chico fairground called the Silver Dollar where about 5,500 firefighters repaired equipment, sharpened tools, ate and slept.

After 26 years of fighting fires, Koenig said butterflies still attack his stomach when he heads to a call.

"I wouldn't be telling you the truth if I said it didn't give me a little anxiety," he said. "When we're starting fires or standing on dozer lines and 80-foot trees are on fire, that's a little bit exciting."

The crew started fires to thwart the wildfire's advance — one of many containment tactics.

The crew used torches and ignition pistols to shoot out flames, applying force in the opposite direction to make the Camp Fire lose momentum.

The fire "sounds like a freight train, or large jet is right next to you — and it's hot," Koenig said.

Koenig and his wife talked every other day and texted regularly. Lynne — who coaches teachers at Woodburn High School — also received updates from another firefighter's wife.

Lynne said she doesn't worry about her husband's ability to battle fires. "He knows how to do his job," she said. She's more concerned about the emotional toll.

When he's on the front lines, "I always ask him for details," she said. "I need to know what he's coming home with."

For Lynne, there's no room for doubt. "I just expect that he'll come home."

But she said their 17-year-old daughter — one of two children — seemed more affected by her father's deployment this time because of all the media attention.

Koenig's family greeted him Sunday as the crew returned to the Woodburn Fire Station.

"The first words out of his mouth were 'Happy anniversary,'" Lynne said laughing. "It can be celebrated at any time — it's just a date."

Rob Martell's in-laws fled their Paradise home of 25 years on Nov. 10, abandoning most of their possessions.

A few days later, Martell, his brother-in-law, Scott Rowe, and father-in-law, Stephen Rowe, returned to where the home once stood. A single wall remained, the rest reduced to smoke and ash.

The Woodburn crew was there, searching for latent fires, and pitched in to help the family look for surviving heirlooms.

Sifting through the ruins, the firefighters recovered 15 of 18 war medals that once hung on a game room wall.

"They were in disbelief when we found them," Koenig said. "We found one or two at the same time, and suddenly, there was a little spark as (Stephen Rowe) began to remember where he'd received those honors."

Although they'd been damaged, Koenig said the inscriptions were still legible.

When they parted ways, Martell praised Koenig and his team on Facebook — a post that has garnered more than 4,000 likes and 3,000 shares.

"The kindness they showed was just invaluable," Martell said. "I just want recognition for those firefighters. The impact they left was immeasurable."

An abandoned car sits on the side of the road near Paradise, California. (Photo: Scott Clause, USA TODAY Network)

After 30 years as a career firefighter, Polk County's Capt. Rusher said the devastation in Paradise was unlike anything he'd ever seen.

"It looked like a bomb went off," Rusher said. "I hope my newest firefighter never sees anything like this again."

The firefighters worked in silence.

"That was the eeriest part," Cox said. "It was so quiet because there was nothing. If you started your engine, that was probably all you could hear for blocks."

On one of their first nights they protected a cemetery from fires burning nearby, including a wooden tombstone dating to the 1800s.

The cemetery "meant a lot to those folks," Burke said. "There are families in there from forever."

For six days they protected a few hundred homes threatened near Paradise and Oroville.

It was the same routine for each home: Blowing needles and parched leaves from the roofs, cleaning gutters and filling them with water and clearing the ground surrounding the structures.

"We were basically this professional landscape crew," Rusher said. "We knew that if a fire came through, I think it would've saved the majority of them."

The tactics can increase the odds of a home's survival by 55 percent, he said.

Other days were spent digging containment lines. Using a road as a fire break, the crew would strip away nearby wood, grass and leaves.

"By taking away all of that fuel ... it will burn up to that point and stop," Rusher said, although embers could occasionally fly to the other side causing spot fires.

Some things survived against all odds.

Despite the devastation, Burke said many American flags were still intact.

"Every flag we came to that was on a house — the house was gone, but the flag was somehow still there."

It inspired the team.

Cox bought an American flag and draped it over the fire engine — a daily reminder to stay strong.

"When something was hard, we'd say 'America is strong'," Rusher said. "I could imagine (Cox) flying that flag on his fire engine for the next 30 years."