'This is what we signed up for': Acts of heroism, bravery from the front line in fight against Oregon wildfires

Rural firefighters across the Santiam Valley tirelessly saved lives and homes, including those with Idanha-Detroit Fire District and Breitenbush Fire Department. 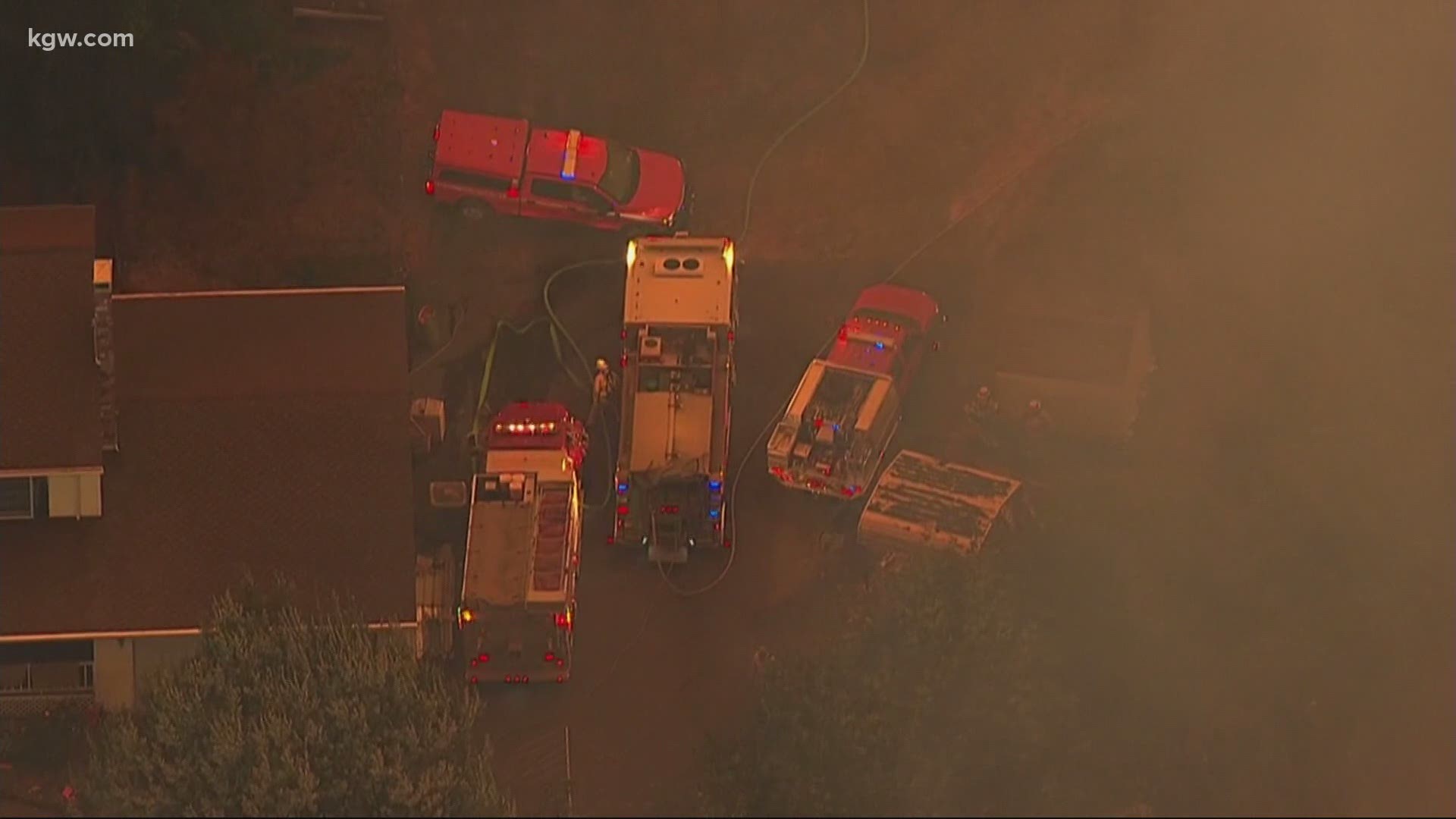 PORTLAND, Oregon — Firefighters out on the front lines of these devastating wildfires have saved hundreds of lives in the Willamette National Forest and Santiam Canyon.

They don’t like being called heroes because they say they’re just doing their job. But it’s what they are: heroes, showing incredible bravery day after day.

“With about 80 cabins that have been in families for 50 to 100 years there’s a lot of history and summers and- ” Pollack said through tears, “It's hard to say that because I'm seeing photos on Facebook and people bonding really well over Facebook. It's very sweet.”

Once people evacuated, a handful of volunteer firefighters stayed on the front lines. They eventually pulled back when things got too dicey. But one firefighter, along with a homeowner who used to volunteer with the department and has an emergency services background, chose to stay behind to protect Breitenbush.

"The two fought fire together as long as they could in the summer homes with our engine,” Pollack said.

Hours later, three more firefighters, including Pollack, cut through trees and joined in the fight.

"First thing I see is the massage house fully involved in fire on other side of bridge and the foot bridge on fire and I said, ‘Guys, let’s go, we’re going to work, there’s no time to breathe!' And we went to work for two-and-a-half days,” said Pollack.

Flames torched about half the buildings at the iconic Breitenbush Hot Springs Retreat and leveled dozens of homes there. While many structures were damaged or destroyed, firefighters were able to protect about half of the structures; all guest cabins, a maintenance facility and several staff houses were lost but the historic lodge and several other iconic buildings were saved.

Pollack says it’s still too dangerous to get to the area with the summer homes to assess what still stands but they assume most – if not all – of the 80 cabins are gone. They plan to fly a drone to get a look at the damage Tuesday or Wednesday.

“We saved a ton of buildings. I mean, it's devastating, there's a lot of buildings on the ground,” Pollack said. “Considering all in the enormity of losing one entire community, we call it a success story.”

Firefighters across the Santiam Valley tirelessly saved lives and homes, including those with Idanha-Detroit Rural Fire District.

"This is what we signed up for. We take the risk for these people,” Idanha-Detroit part-time senior firefighter Ruben Arellano said. “I didn’t have time to really think of anything else. Of course things cross your mind but you just took it away because at the end of day you have a job to do.”

They've dubbed it the “Mongold Stand,” named after the day use area at Detroit Lake.

“We had fire pretty much all the way around and fire blocking our Highway 22 area,” Arellano said. “So when we finally made the call we had so many cars in such a tight spot the chiefs collaborated and made a tactical decision to move us down to Mongold.”

He says they led about 80 people down to an open area around Detroit Lake. Firefighters used hand tools to clear shrubs out of the way and cut trees.

Once they got down there, they realized the situation was intensifying; winds appeared to be drawing both the Beachie Creek and Lionshead fires closer.

“We were going to have everyone get as close to the shoreline as possible and park our apparatuses directly in front of that area to help try to mitigate that heat,” Arellano explained. “So we were going use our rigs as buffers and firefighters were going to deploy kind of right by there and make that last stand.”

Fortunately, winds shifted in their favor. With help from other local agencies, they then devised a plan and made the decision to lead a convoy out of the area through back roads with help from the forest service.

“There was an opening; brought it to the table of our chiefs and they made the decision,” said Arellano. “It was either a now or never moment and time was of the essence. We had minutes to really get everything together and get everyone lined up and make the push.”

Somehow, one person had cell service and it was thanks to him that firefighters reached the National Guard and Forest Service.

Volunteer firefighter Ethan Sitton tried to keep evacuees calm as he went around and organized a fuel cache to make sure they could make it out. He even handed out fire stickers to the children there waiting.

“[I] let everyone know that as long as we were there we were going to do everything we could to keep them safe,” Sitton said.

For Sitton, the situation hit close to home: his grandparents live in the community. He chose to volunteer with Idanha-Detroit to get experience in the field and help the people he cares about, while giving back to the places they call home.

"No matter how bleak it all looked or how hard it was to operate and organize all the stuff, really what was on our mind was survival and survival of our evacuees,” Sitton added.

But their mission is far from over as these fires in Oregon continue to rage. Combined, as of Tuesday, the Lionshead and Beachie Creek fires have torched nearly 360,000 acres in the Willamette National Forest, Santiam Canyon and southeastern Clackamas County.