Tens of thousands evacuate due to fires spreading in Clackamas County

“I was scared. Very, very, very tearful. I just was grabbing things, throwing them in the car. I don’t know what’s in the car,” Glenda Irwin said. 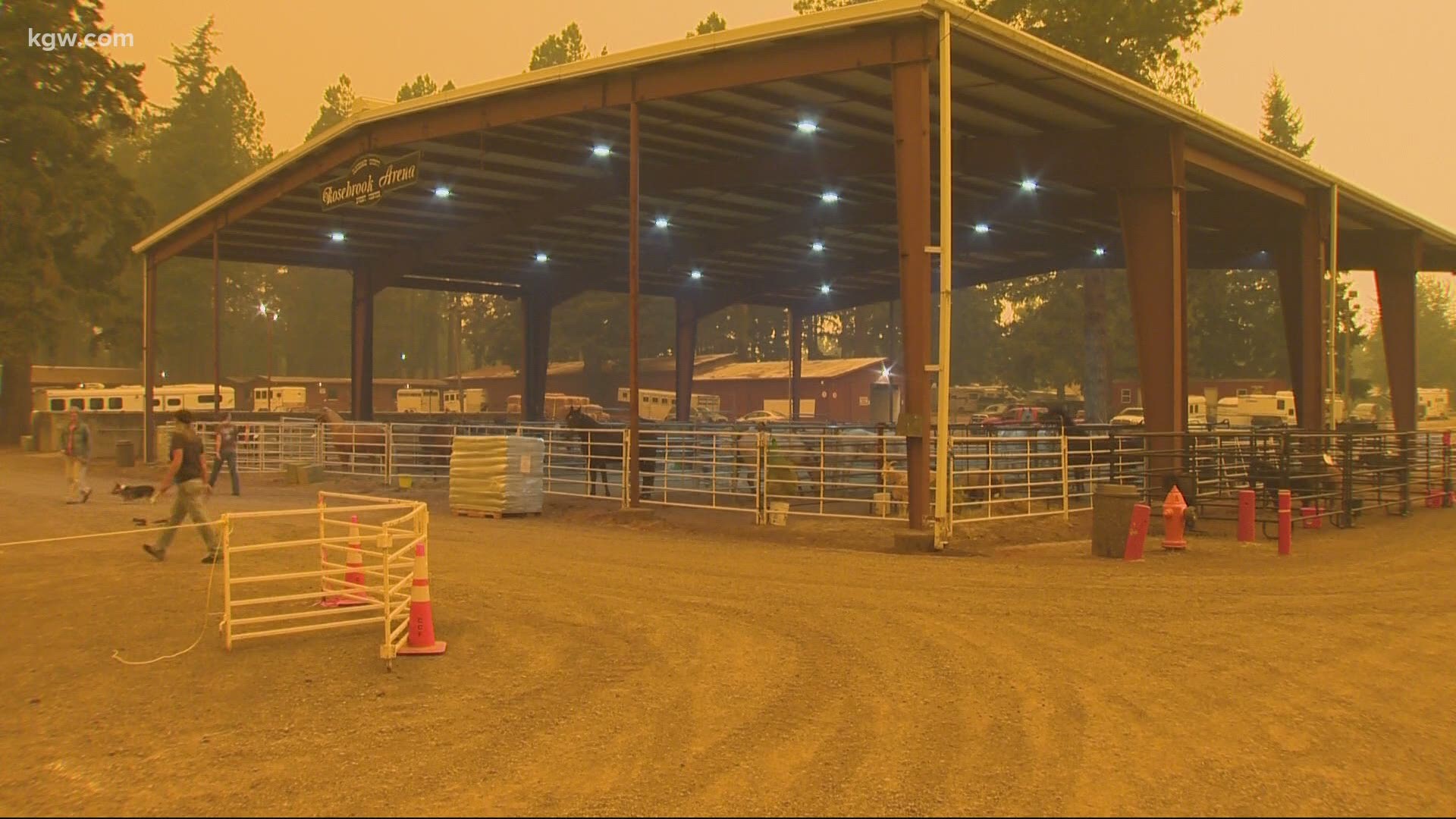 CANBY, Ore. — Officials in Clackamas County declared a state of emergency with fires forcing tens of thousands of people to evacuate and leave their homes, including the entire city of Estacada.

In total, Clackamas Fire tells KGW that as of Wednesday night, more than 230 structures had burned and hundreds more were threatened due to four major fires burning in the county.

Fortunately the fire department says no deaths or major injuries have been reported. One firefighter suffered a minor injury.

The Riverside Fire in the Mount Hood National Forest is the county's largest. As of 8 p.m. Wednesday, it had burned 112,000 acres and was spreading to the west and northwest.

Across the county, tens of thousands of people have been told to "go now," and the evacuation orders keep coming. Everyone else in the county was under a Level 1 (Be ready) or Level 2 (Be set) evacuation order as of Wednesday night.

Many evacuees with animals have been able to bring them to the Clackamas County Fairgrounds. But some have had to leave them behind or haul them elsewhere.

Fairgrounds staff say they don't have enough stalls and pens for livestock, so they are asking for more to be able to house more animals. Otherwise, people can only bring livestock there if they have a way to tie them up or keep them in a trailer.

It feels so eerie out.

Evacuees filling in Clackamas County Fairgrounds parking lot and other areas on the property, many hauling trailers with livestock.

People can still stay the night here but there’s only room left for animals that can be tied up or stay in trailers pic.twitter.com/T9vdKpsBGB

They also ask that evacuees call in advance to ensure there is room for animals and so staff can prepare. Evacuees can camp in their cars, RVs or trailers on site.

With flames growing just a mile away from their home Tuesday afternoon, Glenda Irwin and her family left their house in Molalla. They worried it meant leaving their animals.

“We were stranded because I don't have a horse trailer so I had to call a rescue to help us evacuate,” Irwin said.

Unfortunately, they did have to leave behind turkeys and chickens.

She says it’s tough to feel prepared for something like this.

“I was scared,” she said. “Very, very, very tearful. I just was grabbing things and throwing them in the car. I don’t know what’s in the car.”

They made it to the Clackamas County Fairgrounds in Canby Tuesday night but don't yet know if their house has made it through the fire.

“I don't know what is there, what's left of it, if there's going to be a house or not,” Irwin added.

Thousands throughout Clackamas County have the same anxiety and fear, including Michael Oral who had to leave his home in Molalla with his parents.

“I’m scared, honestly,” Oral said. “[Fire] was coming in from both angles. I went up there [today] and it looked like Mars, like a different planet. It was pure red.”

But he and others are holding out hope that their homes are still standing.

“It’s weird. I hope this never ever happens in my life again,” said Cindy Shoop, who evacuated her home in Molalla Tuesday. “I’ve lived up [in Clackamas County] a long time. It's just sad. There's so many fires all over the place, they just keep happening.”

Shoop’s son Ed and his family evacuated their home in Colton and went to her house in Molalla, only to be told to leave there too.

They all came to the Red Cross Cascades evacuation site at Clackamas Community College.

“They can check in to make sure they’re OK and they have a place to sleep. If they were up all night last night they can lay down and sleep a little bit and get checked in for Red Cross Services,” American Red Cross Cascades Region CEO Dale Kunce told KGW.

People were now allowed to stay the night at the community college. Initially that was prohibited because of COVID-19 concerns, but that changed after local hotels ran out of rooms due to all the fires.

At the evacuation site, people's temperatures are taken and the cots in the gym are spaced out.

That's also where KGW crews spoke to the Shaws, who said they've been through this before when they lived through a volcano eruption in the Philippines.

This time the Shaws had time to pack papers and medications but once they were alerted to "go now," they went.

“We went through this before and lost everything through the volcano so we know that our children are safe and here local and all we had to do is get up and go,” Bryan Shaw said. “It's just things, our lives are more precious than that house.”

“All the momentos and things that are precious to us are still things,” his wife Jacqui added. “We still have our memories.”

The county has set up a few other evacuation check-in sites, parking areas and shelters throughout the county.