Bruce MacGregor's passion project for the last year has been "The Aftermath Project," a collection of photos from areas in Oregon hit hard by devastating wildfires. 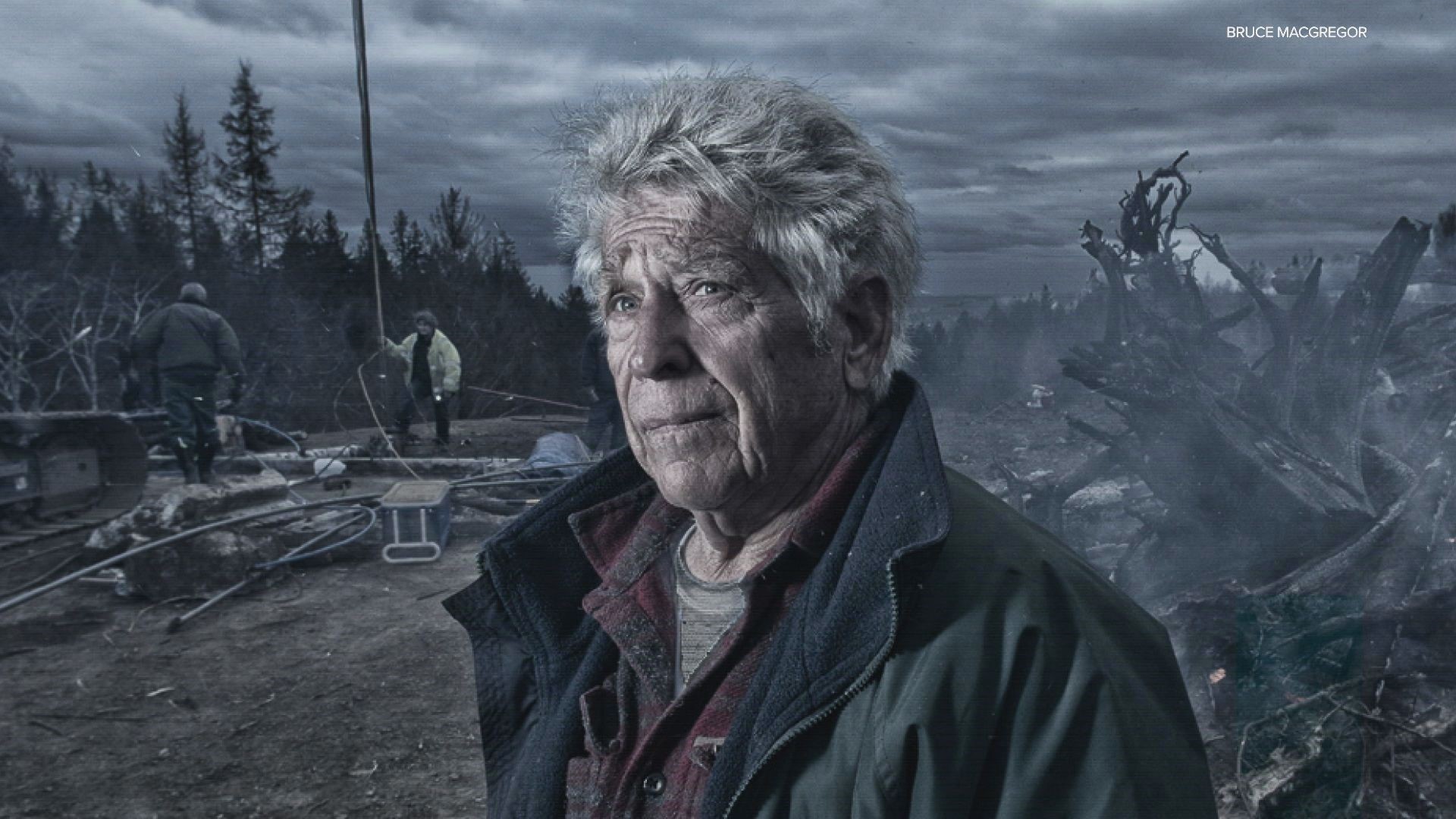 PORTLAND, Ore. — For many fire survivors, the last year has been a rollercoaster of emotions from terror, to heartache, to renewed hope as they recover from 2020’s devastating wildfires.

Portland photographer Bruce MacGregor has dedicated the last year to documenting that journey.

“Across the year, thousands of images were taken,” said MacGregor.

Of those thousands of images, MacGregor said the photos that truly tell people’s stories number about 65-70.

The Aftermath Project, MacGregor’s passion project this past year, has sent him all over Oregon, visiting areas devastated by wildfire. He visited southern Oregon where the Almeda Fire destroyed thousands of homes. Other parts of Oregon he visited included areas affected by the Echo Mountain, Beachie Creek, Holiday Farm and Riverside fires. He spent time talking to people and photographing them.

“That was the trade for me, was a chance to listen to them, for them a chance to be heard,” said MacGregor.

He spoke with people in all stages after the fires from grief, to overcoming that grief, to the process of trying to rebuild.

Macgregor drove hundreds of miles, spending time with around 100 people.

“As I heard these stories, I think I got to be in the fire,” said MacGregor.

He said the stories had a common thread: the fire was fast, people had minutes to grab what they could then get out and it was terrifying.

“But what ties these people together for me was the courage that they all showed the night of the fire, even more perhaps after the fire was over,” MacGregor said.

The courage, resilience and strength of the people he met were captured in a single moment. One particularly striking photo shows a man named Duane, whose eyes reflect his story of survival in a way words would fail to accomplish. His home burned down near Lincoln City.

“He got out with his wife and his dogs just 15 minutes after the flames breached the ridge, described it as fire on both sides of the road, as he drove out. I didn't catch up with him until April of this year. Ironically, it was just about the same time of day. It was about eight at night there was a strong wind blowing, he was on top of the ridge right by his house, clearing land, working with a team. But as the wind blew and the temperature dropped and I took a couple pictures, I think I saw on his face what he felt that night in September of 2020 when he finally came to grips what was happening to him.”

Another story that stuck with him was that of an 86-year-old southern Oregon woman named Edna who survived the Almeda Fire.

Credit: Bruce MacGregor
Edna, at site of home near Ashland

“She lived by herself, was engulfed in smoke the night of the fire, had almost no warning at all, lived up a long driveway from the main road and by the time she got to her car to try to get out her home, the road, the driveway was completely engulfed in smoke. The visibility was about zero. She told me the only way she got out alive was to think back and remember which way the driveway turned as she tried to descend to the main road,” MacGregor recalled.

He said he started the project because he felt people needed a way to see fire survivors in a different way.

“The people who were impacted by the fire are portrayed quickly as victims. I think it's a kind of a go-to frame of reference that we all have. It's not wrong. It's just not complete,” said MacGregor.

“What unfolded for me was the strength of the narrative, the strength of the story that had to be told around the courage of these individuals, not just to face what they faced the night of the fire but to face this unbelievably difficult task of putting their lives back together.”

His last shoot that will complete the project is expected to happen later this month. But after that, people across Oregon will continue to rebuild for years.

MacGregor’s photos will be featured set to orchestral music at the Siletz Bay Music Festival this Saturday, Sept. 11. He hopes it’ll serve as closure for some people.