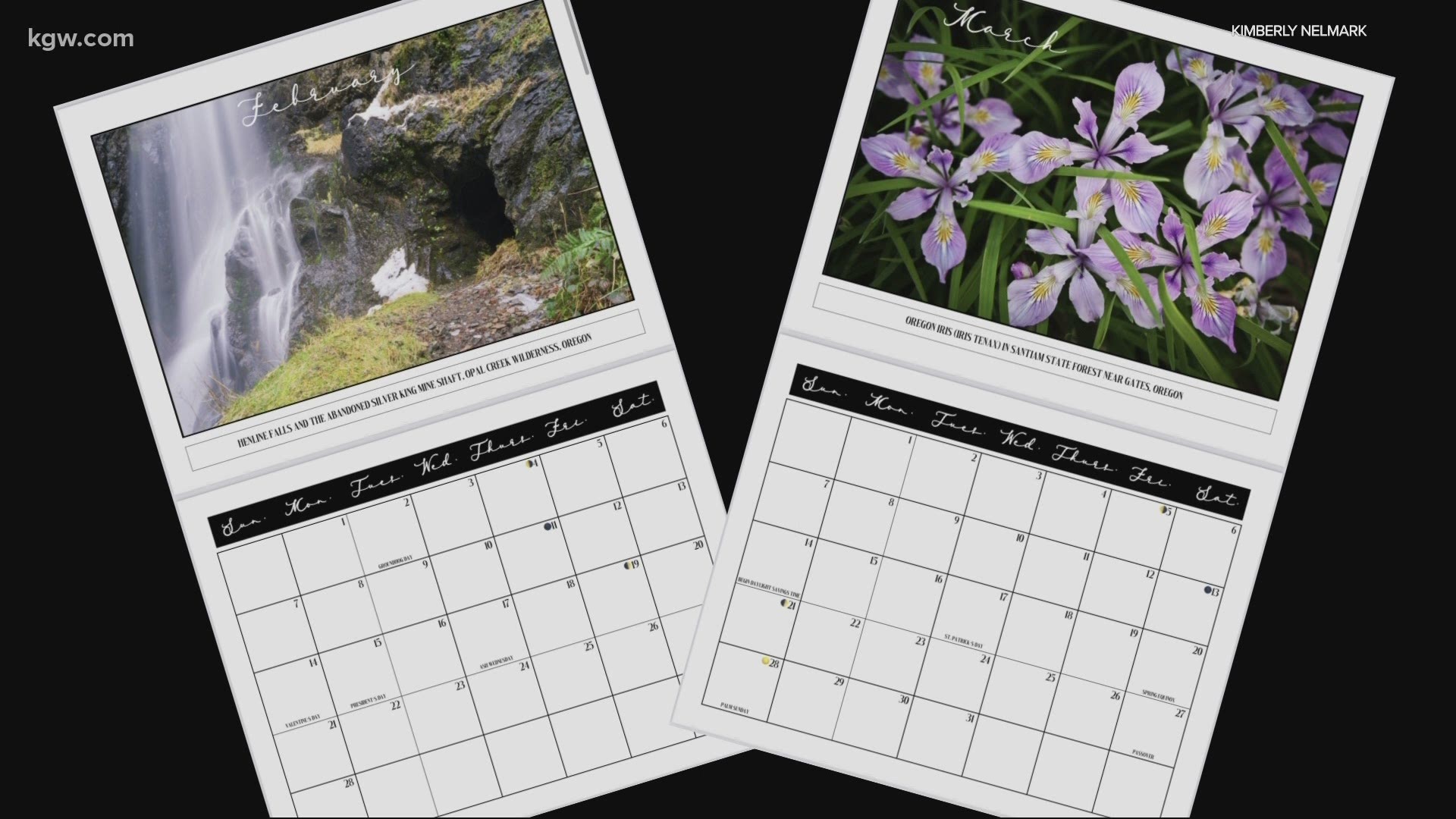 LYONS, Oregon — It's been nearly three months since the Beachie Creek Fire started in the Opal Creek wilderness, devastating the Santiam Canyon. As people there continue to rebuild their lives, one woman is doing what she can to help—with her camera. Photographer Kimberly Nelmark is selling calendars with scenic photos she took in the canyon before the fires, to raise money for fire relief.

Nelmark will never forget the red sky looming over her home near Lyons. At that time, crews had declared the Beachie Creek Fire unmanageable, as it burned 400 yards from her door.

“We kind assumed we had probably lost our home at that time,” said Nelmark. “It was a roller coaster for several days.”

But then, the fire shifted. Nelmark’s home was spared.

Fire destroyed so many other homes and livelihoods as it burned thousands of acres in and around the Santiam Canyon. Looking at it now through Nelmark's camera lens, there's twisted metal surrounded by new growth as vine maples and ferns shoot up through the ashes. Many neighbors who lost their homes have asked Nelmark to take photos of those images as a way to help them heal. One owner, who wanted to remain anonymous, shared this about photos that captured the ruins.

"I saw the fern, new growth amongst the destruction,” she said. “It reminded me we needed to share this story of our canyon and the resilience we all have. It gave hope in distress. It gave peace in hurt.”

Nelmark said sharing those photos was the least she could do to help.

Nelmark is also offering to retake family photos free of charge, for customers who lost their photos in the fire.

It's hard to imagine what the Santiam Canyon used to look like, even for Nelmark. So, she started digging through older photos. She found a photo showing a misty North Santiam River topped with autumn leaves. There was Slide Falls in the spring, and Oregon iris growing in patches near Gates.

“As I was doing that I realized I might have enough to put together a calendar,” said Nelmark, which she did.

Nelmark compiled twelve months worth of Santiam Canyon beauty. Nelmark is selling the calendars for $20 each. All proceeds will go to the Santiam Canyon Wildfire Relief Fund.

Low - Ready Design donated the cost of printing the calendars, which Salem Printing and Blueprint did at half price.

Each photo in the calendar offers a reprieve from what neighbors lost, and a reminder of what they know they'll see again, one day.

“I don't think there's any way you can describe the resiliency of the people who have lived through this,” said Nelmark.