Charles and Linda Beck are staying in a Lincoln City hotel and say they've been denied FEMA assistance multiple times. 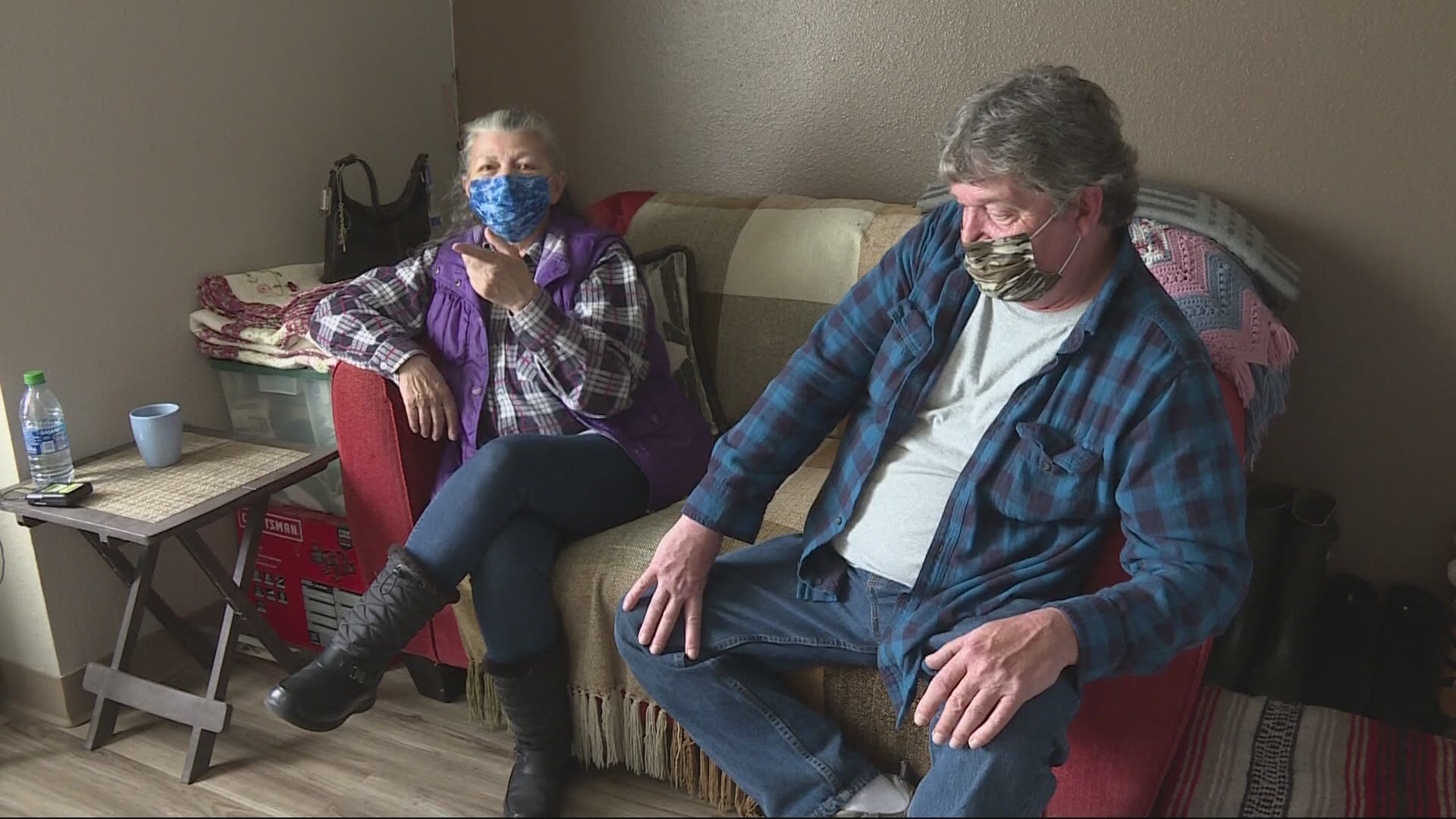 LINCOLN CITY, Ore. — More than six months after wildfires burned homes in parts of Oregon, some people are still living in hotels.

At the Ashley Inn and Suites in Lincoln City, a couple who used to live in Detroit is still displaced, staying at the hotel unsure what the future holds. Their RV and most all of their belongings burned in the fire that swept the Santiam Canyon in September.

Charles and Linda Beck, along with their dog Brandy, have hopped from a friend’s home, to a motel in Salem, and are now in Lincoln City.

“I mean it’s nice. I appreciate it. I appreciate the help they’ve given us," said Charles. "But this is not our home. I haven’t had my wife’s home cooking for six months."

He and Linda have been married for almost 37 years.

'We were in a firestorm'

They remember the night they had to leave. A phone call from a concerned friend woke them up at 2:30 a.m.

“I opened the door and we were in a firestorm. The whole town was on fire,” said Charles.

“All I could think of was, ‘I got to grab all his meds, his insulin, get the dog, get a couple cans of food for her,'” Linda recalled.

The Becks said they only had about two minutes to grab whatever they could.

“I looked at her one time and said I think we’re going to die sweetheart,” said Charles

“I told him God was with us,” Linda said.

After that, Charles said he put his foot down on the pedal of their truck and got out of there.

“We came out of it with the clothes on our back and that was it,” Charles said.

A few days after the fire, they returned to see their belongings all burned up. Charles said a power pole had fallen right through what used to be their bedroom, on top of their bed.

They feel fortunate to have made it out alive, but since then things haven’t been easy.

“The nightmares every night are unbelievable,” said Linda.

The Becks didn’t have insurance on the RV they were living in at the Detroit RV Park. Charles has health issues and Linda is retired.

“All my proof of ownership burned up in the fire," he said. "It’s my fault, [for] financial reasons I wasn’t able to get the trailer in my name. Besides we were living in it. We weren’t pulling it."

Even with help from an advocate, the Becks say they’ve been denied assistance from FEMA multiple times.

“The man that I bought the RV from passed away and his grandson was the heir and so DMV gave me a form, an official document,” said Charles.

He drove all the way to Dayton, Washington, to get the document notarized to prove ownership.

“Brought it back and FEMA still denied it,” he said.

“FEMA had told them, and we were there, if you don’t have the title you can get a notarized statement, and so they’ve done everything they’ve been told to do,” said Melissa Baurer, coordinator for Santiam Service Integration Team (SIT), one of the organizations that help fire survivors.

Baurer said the Becks have an advocate through SIT as well another community organization. SIT also helped Charles pay for the trip to Dayton.

“There’s some many households like theirs that are struggling,” Baurer said.

She said she knows of one person who applied to get help through FEMA eight times. SIT has been able to help him finally get assistance. But the complicated process to get help can wear people down.

“Survivors shut down after a while because they’re told, ‘No, I need this’ or ‘You have to get this turned in,’ and sometimes people give up,” said Baurer.

She said it also doesn’t help when some of the people who are supposed to be helping fire survivors, don’t seem to be familiar with trauma-informed care and don’t approach situations with more understanding.

“An interaction a survivor has with a provider that is [there] to help them with their recovery, kind of brings up some PTSD,” Baurer said.

“It’s almost like they’re laughing at me. It’s like they have no intentions ever of helping me,” said Charles.

But the Becks are still holding out hope.

“So now here we sit. I don’t know how long the motel is going to hold out," Charles said. "After that I guess we’re on God’s good graces because we have nothing."

He said the thing that would help them the most, is if they were able to get an RV. Charles said replacing the one they had would probably take $12,000-$15,000.

“An RV would be cheaper than keeping us in a place like that [FEMA temporary housing] and this for how many months. It doesn’t’ seem to make any sense,” said Charles.

While the Becks are in a tough situation, they’re grateful for the help they have received. They get two to three meals a day and at least have a warm place to lay their heads. Charles said he got some of his tools replaced, thanks to the Salem Rotary Club and Ace Hardware in Stayton. Linda showed off the quilt she received as a fire survivor as well.

In the meantime, Baurer said SIT is consistently working with more than 400 families. About half of them are getting help from two case workers, privately funded through Santiam Hospital. The case workers take on more families each week.

She said what’s needed are more boots on the ground to help families. Baurer said the State of Oregon recently received more funding that she hopes will go toward hiring more case workers to help families navigate the complex system.

Baurer said families are encountering other issues, too. She said families who are trying to get approved for housing support, consisting of two months of rent, from FEMA are being told that it’s a 30-day process to be approved. That sometimes turns into 60 days or even 90 days.

“I think FEMA’s overloaded as well. But that’s one of the concerns that survivors have is just the time frame of people being approved,” said Baurer.

In addition, she said some people are told in the initial interview they have with FEMA that they will be approved for housing, but sometimes that doesn’t come to fruition. Charles said he encountered the same thing, when he was told they’d be able to replace his RV but they've continually denied his application.

Baurer also said another difficulty is finding housing in the Santiam Canyon for families who’ve been displaced. There was low rental availability even before the fire and now Baurer hopes landlords in the area will contact SIT to hopefully work something out that’ll help families return to the canyon.

The SIT team is continually working to help fire survivors. It partners with the Santiam Canyon Wildfire Relief Fund. Baurer said $1,000 grants are available to families who have lost their primary home in the wildfire. The first round of applications is open until April 2.

SIT has helped more than 1,100 households since the fire in September. That is on top of the typical community need the group also addresses.

KGW reached out to FEMA asking about fire survivors who apply for help but are denied. Below is a portion of the response we received.

While we cannot discuss individual cases, we hope this provides a bit a clarity into the process of disaster assistance and resources that remain for survivors that are found ineligible.

It is our mission to provide assistance to every single eligible survivor. When a survivor applies to FEMA for assistance, the application is reviewed by an applicant services specialist. It is not uncommon for this process to require additional information and a further exchange of dialogue. If the applicant is found ineligible for assistance, they are encouraged to appeal that decision.

If the survivor is still found to be ineligible, there are other services available in the State of Oregon to help them in the recovery process. Disaster legal services is just one of many resources available to the wildfire survivors in Oregon.