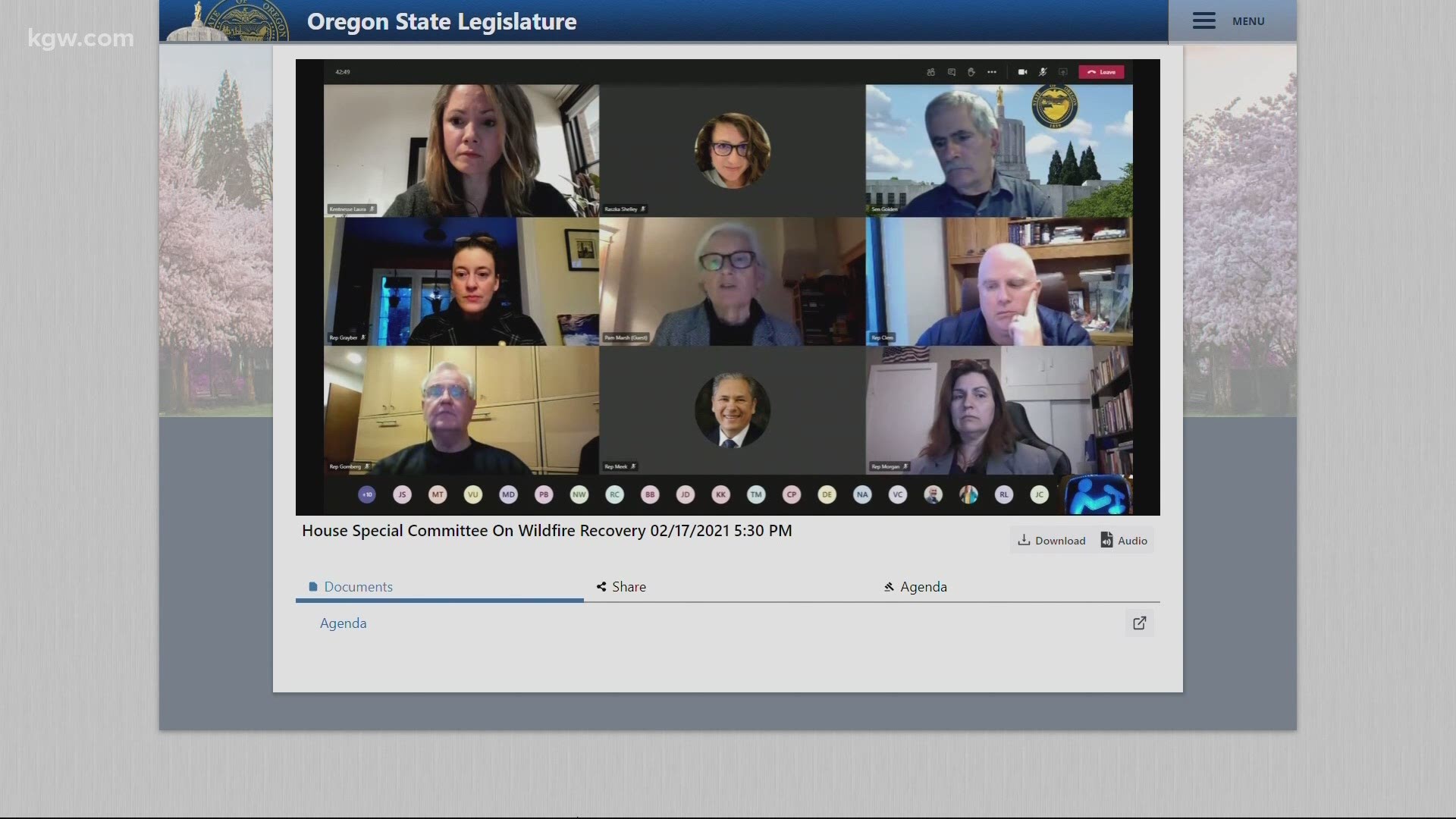 SALEM, Ore. — People in many parts of Oregon are still dealing with the fallout from the fires in September.

The Legislative House Special Committee on Wildfire Recovery had more than 60 people wanting to speak about the devastating fires in Southern Oregon in early September.

“We lost 2,500 homes, many businesses, and basically affected every single sector of the community,” said Rep. Pam Marsh, (D-Southern Jackson County). Marsh is vice chair on the committee. Marsh’s district encompasses Ashland, Talent, Phoenix and the southwest corner of Medford, among other areas.

The purpose of the meeting on Wednesday night was to give lawmakers a chance to hear people’s stories so the state can figure out how it can best help.

People spoke via phone and video chat. Some sent in written statements as well. A 17-year-old senior at Phoenix High School was one of the people who spoke. He said during the fire, his family tried to recover his dad’s tools, which he uses to make a living. But because they did not get an alert and the fire moved so quickly, the family had to leave in a hurry and took very few items.

“We were stuck without any source of income even after the fire,” said the 17-year-old.

He said his family slept in cars in Grants Pass because they didn’t know where to go.

“There was a point where I wanted to drop out of school so I could help provide my family with money,” he said.

Others recounted their experiences too.

“The entire neighborhood is gone. I lost everything,” said Susannah Perillat.

“We did not get notifications,” she said.

The lack of alerts is an issue that was brought up numerous times.

“I found out on Facebook. What about the people who don’t know about that stuff,” said James Williams, who said he and his wife only had about six minutes to get out of their home.

“We made it out with the clothes on our backs and our four dogs,” he said.

“I still wake up at night, sweating, having nightmares, terrors about being trapped in a house and burning alive,” said Williams.

Looking ahead to the future, people said having a more robust alert or siren system would be helpful. Multiple people also said something has to be done about unmaintained shrubbery. That along with the wind fueled the fire as it consumed homes in numerous mobile home parks.

“People have already spoken to the blackberry bushes along the greenway and there just really Isn’t the county oversight to protect these parks, which is mostly low-income people,” said Kathy Kali.

Kali lived in the Bear Creek Mobile Home Park in North Ashland and at the time of the fire was also managing it. She said it was the first neighborhood to burn.

Kali said she saw the smoke coming but never got an alert.

“I literally was out banging on doors leading the evacuation,” she said.

Now, she’s worried about the many former residents who can’t come back to the mobile home park.

“The vast majority of people who are not coming back to the park, which is about half of the residents, about 35 out of 70 residents, cannot come back because they cannot afford to. I am very concerned about my people,” said Kali, who no longer manages the park.

Kali said she’s privileged in that she and her family are able to buy a home, but many others aren’t so fortunate. She said this week she spoke with a former park resident over the phone who began crying and told her the insurance money she received was not enough to buy a new home.

Thaddeus Gala, whose live videos of the fire on social media helped keep people in the community informed, echoed the calls to prevent another similar fire from occurring by managing unmaintained grass and shrubs.

“If we don’t do something, it’s going to happen all over again,” said Gala.

Another issue people brought up is the lack of availability of affordable housing. Some who testified said it’s been a problem since before the fire. Teresa Cisneros, a housing organizer for Rogue Action Center said 20 years ago, the median home price for Jackson and Josephine Counties was a little over $150,000. That number has increased to about $338,000, she said.

In addition, Cisneros said the fire coupled with COVID-19 has disproportionately impacted the area’s Latinx community.

“1,748 mobile homes or apartments [were] lost in Almeda Fire, which was disproportionally devastating to our Latino and Latinx communities that was already suffering from COVID at twice the rate of others in Jackson County,” said Cisneros.

She said many families are now sleeping in cars, on couches, in tents and in motels. Cisneros said many of those displaced are seniors or people with disabilities.

Cisneros urged lawmakers to hire three full-time bilingual employees in the cities of Phoenix and Talent as well as an employee for Jackson County dedicated to helping displaced families have access to all aspects of the rebuilding process.

Another opportunity for fire survivors to speak to Oregon lawmakers

On Monday, Feb. 22 at 5:30 p.m., people in other fire-affected areas like the Santiam Canyon, Portland metro area and coastal areas can give their testimony in written form, live over the phone or through video chat.

Those who would like to testify have to follow the instructions on the Oregon Legislature website. Registration to testify will remain open until the start of the meeting.