"Disaster one was losing the home," property owner Nicole Ruyle said. "Disaster two has been dealing with government agencies." 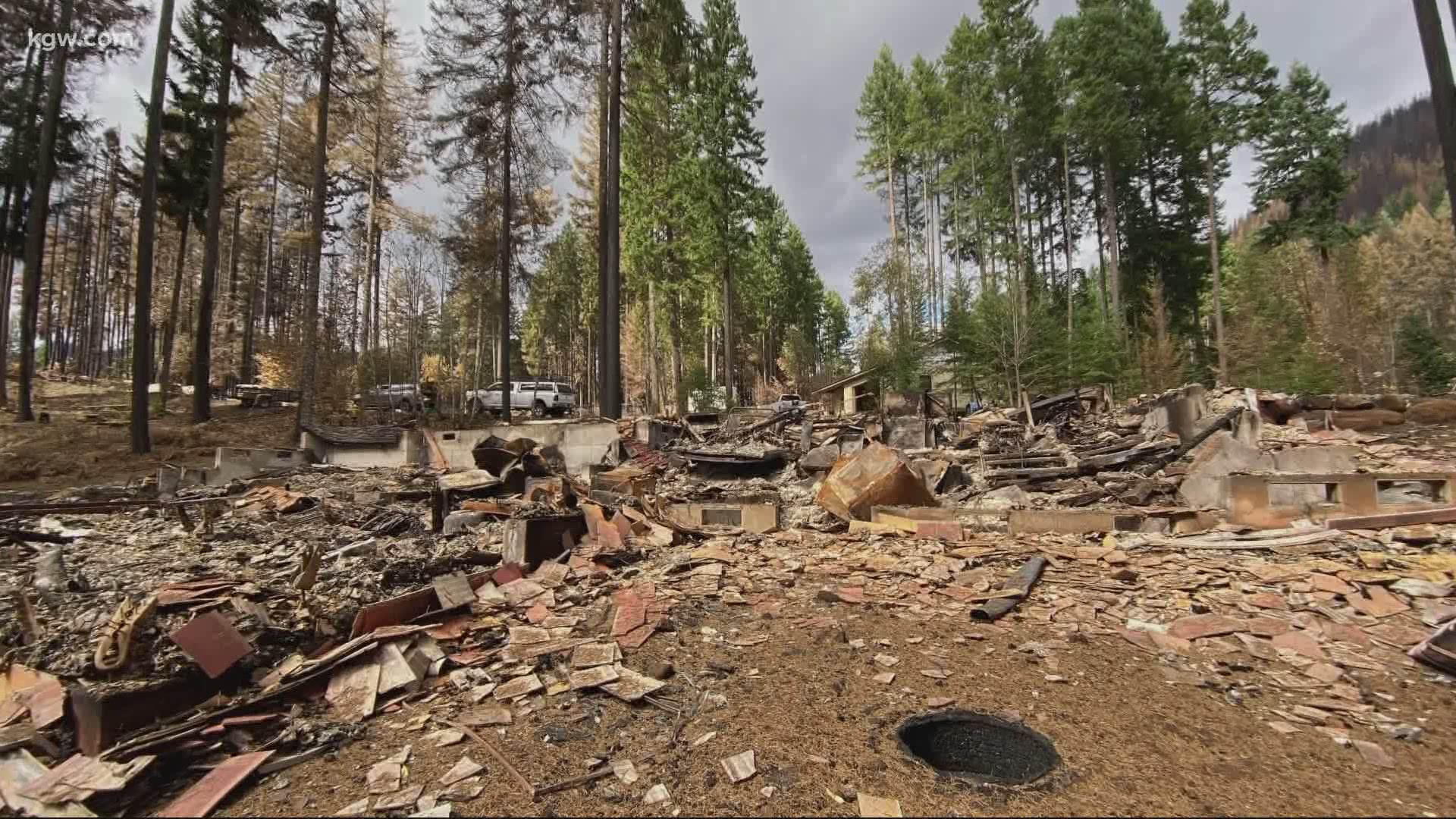 DETROIT, Oregon — People who lost their homes in Oregon wildfires are now dealing with more heartache and stress. They want to get the cleanup started, but say the process to do so is very confusing.

Nicole Ruyle is one of thousands of property owners living in limbo.
Her family's dream vacation home is in ruins after the Beachie Creek and Lionshead fires tore through Detroit and other towns in the Santiam Canyon.

"It still doesn't even seem real now. It's been rough," Ruyle said.

The Ruyles want to rebuild, but they first have to make sure there's no hazardous material among the ruin.

"This has been harder than the loss of the home by far," she said. "Disaster one was losing the home. Disaster two has been dealing with government agencies."

Through Oregon's wildfire cleanup and debris removal process, the state asks property owners to submit a Right of Entry form by Friday, Oct. 16 so U.S. Environmental Protection Agency (EPA) cleanup crews can get in.

Call 682-800-5737 or contact your individual county to learn how to submit your Right of Entry form.

"As this deadline looms we're feeling extreme pressure," Ruyle said. "We're hesitant to sign that [form] over without dates and deadlines and clear answers."

But KGW learned that deadline is flexible. The state is encouraging people to apply by then for urgency purposes and to expedite the process, but they won't deny forms submitted after Friday.

Like many who lost so much in the fires, the Ruyle doesn't feel the state's recovery process is clear enough.

"It's been over a month since homes burned," she said. "We deserve some answers now."

Will the government try to go after insurance?

The state said that first step won't cost property owners anything; together with FEMA, the state will cover costs to inspect for and remove any hazardous waste.

"No government agency is going to be recouping money from people's insurance that could have otherwise gone toward rebuilding your home," Oregon Debris Management Task Force spokesperson Lauren Wirtis said.

However, Wirtis said the government could try to recoup insurance money for step two: ash and debris assessment and removal.

If property owners handle the cleanup on their own, the cost will likely be more than debris removal funds from insurance and the owner must make up the difference.

But if insurance payouts have been depleted during the rebuilding phase there won't be any cost to the property owner.

"The state has to make this effort in order to have a cost-sharing partnership with FEMA," Wirtis said.

Wirtis said FEMA requires government agencies "to make a good-faith effort" to recoup debris removal-specific funds or other insurance money after the property owner has rebuilt, to ensure there's no duplication of benefits.

Should property owners fill out the Right to Entry form?

Property owners don't have to decide yet if they want the state to manage the second step. But they are being asked to decide by filling out the form with their counties if they want to have any hazardous materials removed.

If people agree to any step now, they can later opt out, Wirtis said.

In fact, they don't even have to fill out the form at all.

"It's your private property. You are welcome to do cleanup for yourself," Wirtis added.

But going at it alone will be more costly and could lower the amount of money from insurance to rebuild your home, according to the state.

If you do go that route, the DEQ urges you to hire licensed contractors and reach out to waste disposal sites and your county about cleanup requirements.

"I know it might take longer and seem like one more form to fill out, but it will save you money in the long run and it's safer," Wirtis added.

The Ruyles may still decide to handle the cleanup themselves, because Nicole's husband Steve is a contractor.

While they have their work cut out for them, they feel it pales in comparison to navigating the system.

"We know this is new to our area, it's not something these agencies have dealt with. But I know there are so many of us feeling this stress on top of losing a home," Nicole Ruyle said.