With a large part of their tax base gone, volunteer firefighters with the Idanha-Detroit Fire District are worried about the future. 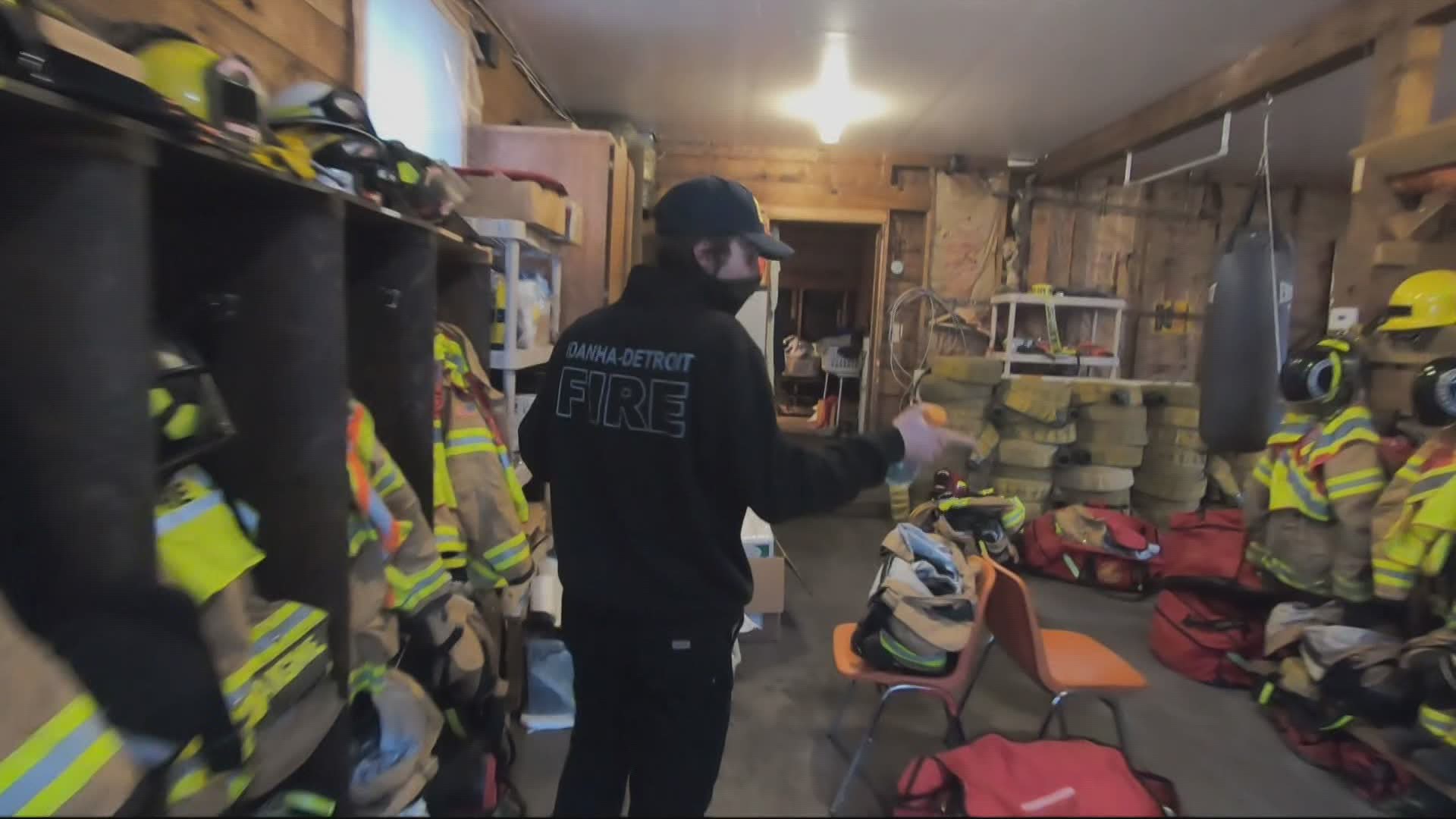 IDANHA, Ore. — This week marks six months since fire tore through parts of Oregon and the Santiam Canyon. In many cities, including Detroit, charred debris is still visible.

But there is some good news for Detroit, where city leaders say just this week water is starting to get turned on and people are waiting to get their meters turned on as well. It's not drinkable or to be used for a shower, rather for things like flushing a toilet. It’s a start in the right direction.

Another step forward, plans are underway for a new community center in Detroit to replace the city hall that burned down. On Tuesday, the United Way of the Mid-Willamette Valley donated $250,000 to the Detroit Lake Foundation.

But there's still a lot of work to be done and right now volunteer firefighters with the Idanha-Detroit Fire District are worried about the future.

Number of Idanha-Detroit Fire District volunteer firefighters down by half

Deputy Chief Damon Faust said the station’s been around since the 1950s. The fire district covers about seven miles from the City of Idanha to the City of Detroit but also responds to collisions and emergencies on the highway.

It's a big job for a small, rural fire district run by volunteers.

“In part, our volunteers in Detroit no longer have homes so they're not around to volunteer,” he said.

Faust said others left because they were unable to experience the same level of adrenaline they got while fighting the fire.

And others had a tough time coping after fighting the fire for days then dealing with the fallout for weeks and months after. “The other aspect is some of our volunteers are struggling with the trauma of it all. We've had a diagnosis of PTSD within our ranks,” said Faust.

Whatever the reason, losing half their volunteer firefighters puts them at a disadvantage with fewer people to help in an accident on the highway or in another emergency.

“The closest help to our west would be Lyons and Gates and that’s about a 40-minute response time. To our east, you have Camp Sherman and Sisters. That’s the same amount of response time,” Faust said.

“We're 90-some odd days from the next wildland [fire] season,” he added.

Ethan Sitton, one of the volunteer firefighters for the Idanha-Detroit Fire District said they’re trying to move forward, but will need help.

“It's events like that that make you see how important it is to have those people [volunteer firefighters] here,” said Sitton.

On top of the concerns regarding fewer volunteer firefighters, the fire district also has financial concerns too. The fire district’s tax base is largely gone and paying the bills won’t be easy.

“We're at the point now, we've been very conservative with our budget but in December 2021 our lights will go out. We won't be able to pay our electric bills,” said Faust.

Right now they're talking to state lawmakers, applying for grants and hoping something comes through. Although Faust said when it comes to federal or state grants, there is often a stipulation that there has to be matching funds, something Faust said isn’t possible.

“If we don’t have money to keep our lights on, I don’t have matching funds for you. If we’re struggling to put fuel in our vehicles so we can respond to motor vehicle accidents, I don’t have funds to match those grants,” said Faust.

But he said despite the challenges, the Idanha-Detroit Fire District and its volunteers are still there and ready to respond for now.

Faust said other rural fire districts are facing similar challenges. The hope is to partner with other stakeholders like ODOT or another state agency so revenue can be shared with the fire district. If people want to help, he said they can contact their legislators to advocate giving more help to rural fire districts. Faust said there’s also a way to donate on the Idanha-Detroit Fire District website.

One positive thing Faust mentioned is the fire district has received a donation of land where they plan to build a training facility, apparatus housing and some office space. They’ve also received three donated fire engines. However, Faust said they can’t move forward with plans or projects until they solve their imminent issue, which is keeping the lights on past December.