Monday evening ODOT opened up Highway 126 westbound into Blue River, one of the hardest hit areas in the McKenzie River Valley. 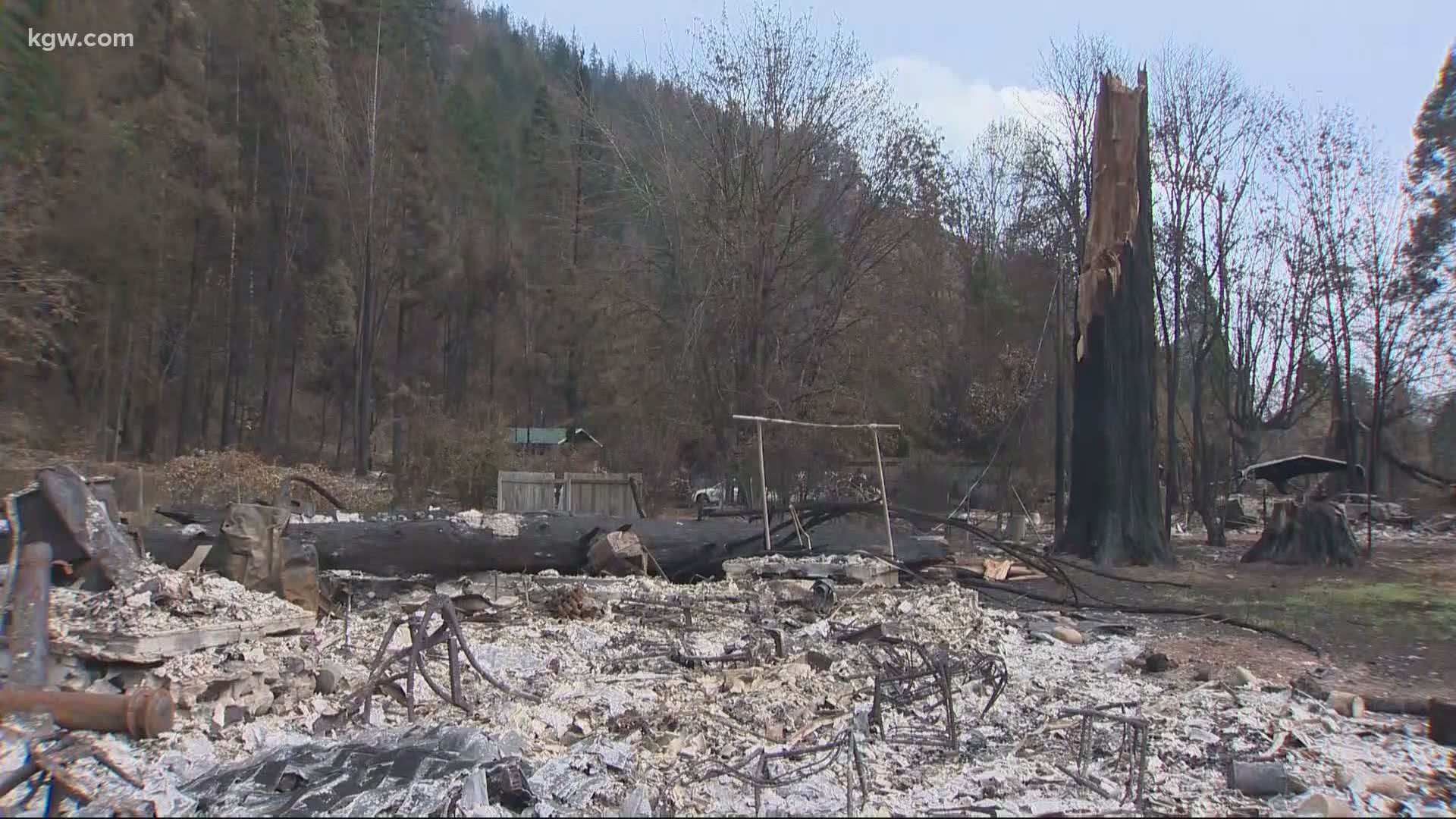 LANE COUNTY, Oregon — For the first time since evacuating from their homes, Dennis and Debbie Davis saw firsthand on Tuesday the damage caused by the Holiday Farm Fire.

Two weeks earlier, Debbie woke up to an orange glow. She and her husband Dennis grabbed their three dogs and escaped their home just seconds before a 100-foot-tall Redwood tree smashed down on it.

Another tree fell on the roof of their truck as they tried to escape, caving in its roof and shattering the windshield.

"We used it as a battering ram to get out of here," Dennis said.

Two weeks later, the couple returned to find a concrete foundation filled with the ashes of what used to be their home.

"We had 41 years of a marriage right here in this house," Debbie said. "All gone."

It was supposed to be their dream home. The couple had sold their home in California and paid for this one in cash. Their plan was to retire early and enjoy the peaceful sounds of the McKenzie River flowing by just across the street.

"Our beautiful little house in the woods by the river, now it’s this," Debbie said. "I’m sorry, and everything I’ve had in my entire life is gone. But I’m alive, that’s the important thing."

A little further east of their property, Patrick Dibala and his wife Nancy walk the property where the store Christmas Treasures once stood. The couple had owned the store for more than 20 years. Nancy said her children were raised in the store.

"He used to run his big wheel around in the store," Nancy said about her youngest son. "Our other sons worked for us."

The monstrous Holiday Farm Fire tore through the store with such a fury, it hardly left anything behind.

"Everything else looks melted," Patrick said, "You know even the rocks on the fireplace looks like some of them dried and cracked from the heat."

The store was a popular attraction, drawing around 20,000 customers each year.

"Landmark for everybody, I guess," Patrick said. "We put our heart and soul in it."

When the Holiday Farm Fire started, Patrick saw the flames from his front porch.

"We grabbed a few things, when we got down here the ridge was on fire and there were spot fires all behind the store," he said. "Wasn’t time to do anything."

Patrick said his house is still standing, but along with his store he lost two rental homes and two warehouses full of Christmas Treasures merchandise.

The Christmas Treasures owners are unsure what they will do now. Their neighbors, the Davises, said what's lost are only material things.

"We just want to rebuild and go on. This is why we retired. This is beautiful."

The Oregon Department of Transportation is recommending homeowners and the general public keep out of the area. It is part of a Level 2 evacuation zone and hazardous trees are still a major concern along Highway 126 and surrounding streets.

Lane County has created a damage assessment website that shows the homes along the McKenzie Highway most affected by the Holiday Farm Fire.