Mike Pomeroy said as the fire raged around him, he realized the safest place would be inside the dam. 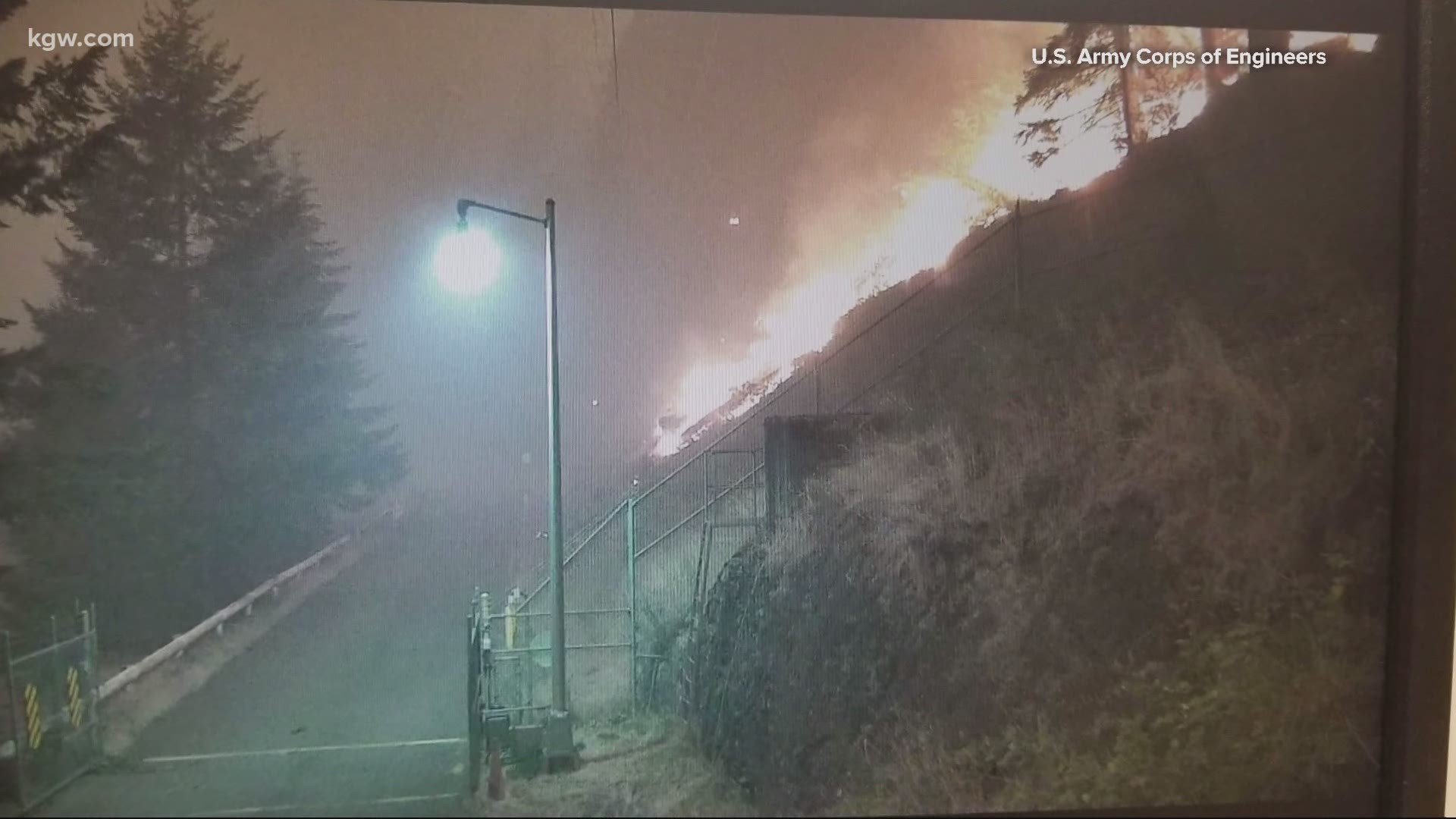 DETROIT, Ore. — Forty five miles east of Salem along Highway 22, the Detroit Dam, in the Cascade Mountains, holds back some of the North Santiam River. It forms Detroit Lake and controls the amount of water flowing into the river and the valley below.

The dam is run by plant operators who carefully adjust the computers and machines that run turbines in the massive structure and control the water output.

Mike Pomeroy is one of those operators. On the afternoon of Labor Day, he reported to the dam’s control room, called the powerhouse. It's housed in a smaller building near the base of the dam. All alone, Pomeroy was about to begin one of the longest shifts of his life.

Over the first several hours, it seemed like a routine shift. Pomeroy drove back and forth the three miles from the Detroit Dam to the Big Cliff Dam downstream, checking on gauges and making adjustments.

He knew there was a fire in the area.

It was not a major concern. There’d been fires in the area before. But it was something to keep an eye on.

He felt a windstorm arrive around midnight.

“It was getting pretty bad up there," Pomeroy said. "The winds were probably doing 50-60 miles an hour. And I knew the fire was approaching."

As night turned to dawn Tuesday, the weather grew worse. On the way back from a trip to Big Cliff, Pomeroy saw a state trooper helping someone fix a tire.

"I was asking him what was going on," he said. "And he said they were in a Level 3 evacuation. And we had to yell back and forth to talk over the wind noise of the storm."

RELATED: These Oregon areas are under evacuation right now

Pomeroy knew it was time to get down out of the mountains. At 5 a.m., he set the dam on a form of autopilot and began to drive toward town. He did not get far. The firestorm had arrived.

"The fire had already come up to Big Cliff Dam and was across the road essentially," he said. "A lot of fire and debris on both sides and fallen trees. I could feel the heat through the car itself. The car started to fill up with smoke and it became apparent that there was no way. Visibility was measured in feet. With all that debris and large boulders in the road, it was only going to take one hit and that car was gonna be finished."

He turned around, driving just 3 mph through the dark smoke, not sure he’d make it back to the dam.

"I was running scenarios in my mind if the car died," he said. "My backup plan if that happened was probably to head straight to the reservoir or river and get in that."

Credit: Tom Conning, Army Corps of Engineers
Smoky skies from the Beachie Creek and Lionshead fires can be seen from the Detroit Dam near Detroit, Ore.

Fortunately he made it to the dam, but now he was stuck. With fire closing in, there was no way out.

"After that, it was just a day of brainstorming, trying to come up with as many ways to protect the dam and the equipment and myself as much as possible," Pomeroy said. "So although I’d be doing things, I would reach pauses to where I start asking myself more questions. Then I would come up with more things to do and I would go do them."

He opened the security gates and the visitor center and left supplies inside. He knew how easy it was to get surprised and trapped. He wanted others running from the fire to have a place to hide out from the flames. He moved several trucks inside a large garage in the dam.

As the hours passed, the flames arrived.

"I saw the fires coming in the security cameras," Pomeroy said. "And in my mind it was game time. To be honest, it looked big and scary in the cameras. So I thought the safest place for me would be in the dam itself."

Credit: Mike Pomeroy
The flames can be seen on the Detroit Dam security camera.

He ran from the powerhouse 50 yards up to the dam, knowing the huge cement structure would not burn. But he worried about the smoke and brought gas masks along with food and water. The carbon monoxide level inside the dam was rising as smoke floated in the lower three levels.

It was unlikely the dam mechanisms would malfunction but he had to be sure.

He stayed inside the dam, checking everything he could think of to make sure it was safe. Sometimes he would call other operators to get their advice and pass along word to his family that he was safe. He kept checking and re-checking the dam all day Tuesday until Wednesday morning.

Credit: Mike Pomeroy
A view of the fiery skies from the Beachie Creek and Lionshead fires, as seen from the Detroit Dam in Detroit, Ore.

He kept working. Surrounded by walls, he couldn't see the fire pass through. He forced himself to stay awake more than 30 hours, only taking 15-minute breaks when he could reach fellow operators outside who would watch the dam readings remotely and be sure all was well.

Finally, it was over.

"In the morning, I got up and poked my head out the dam door and I didn’t see any signs of fire," Pomeroy said. "So I went ahead, back into the powerhouse and control room. I didn’t see any large flames on the security monitors and I radioed down to Lookout Point. They responded and I was pretty happy. Pretty happy," he said.

He said he's grateful to the operators who talked with him late at night until the fire destroyed the communications network and the Army Corps team that kept his family informed about his safety.

"That kind of support just means a lot to me," he said. "I really appreciate it."

While the fire had passed, the roads were still blocked by trees and boulders. It took some time for crews to reach the dam from the valley. But Wednesday afternoon they did and Pomeroy finally made it home.