'All that's left of my house': After days fighting the Santiam fires, firefighter finds home destroyed

Many have come to call Detroit home and so many more love to visit. The city was largely destroyed in the fires. 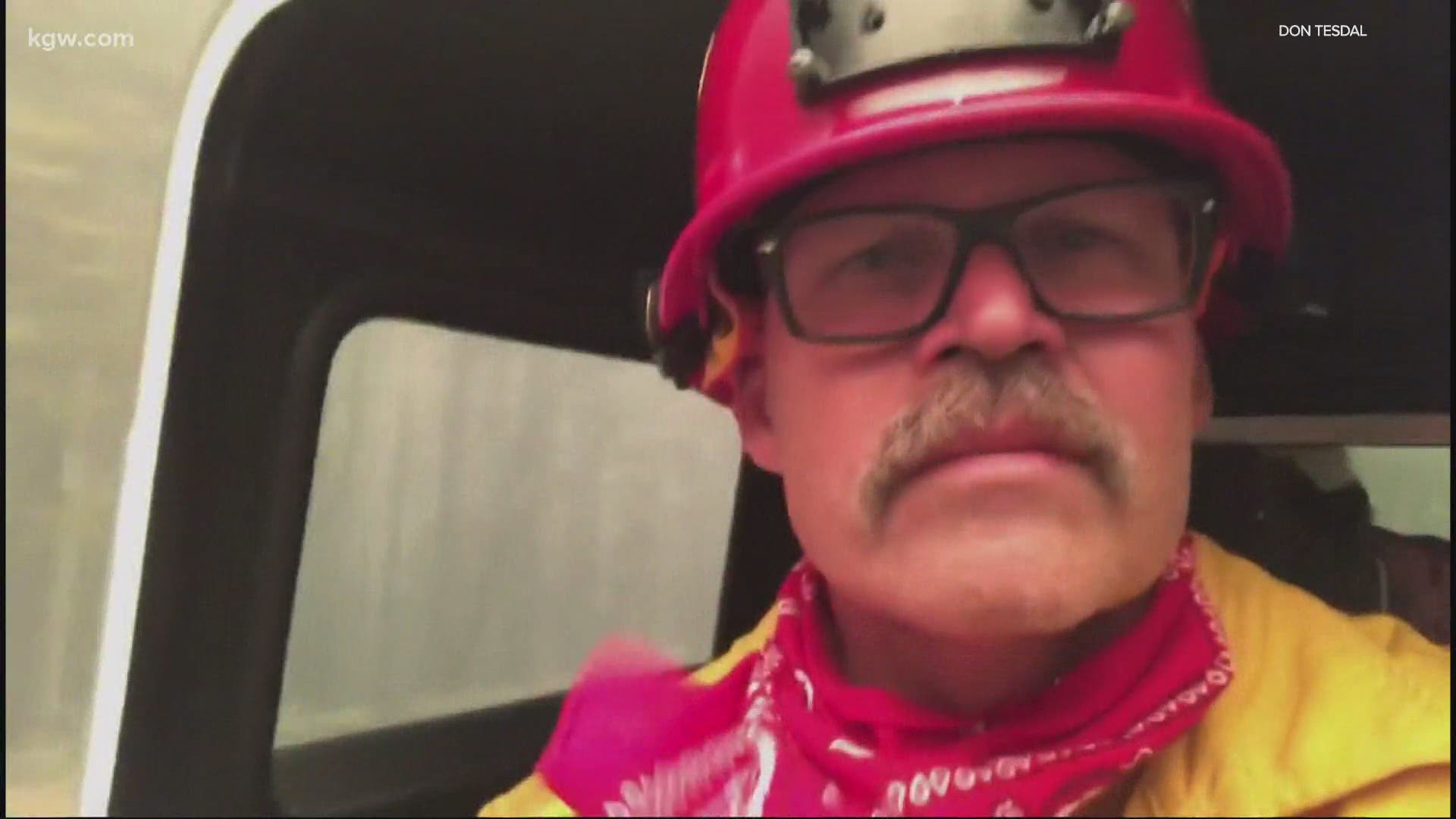 DETROIT, Ore. — With the yellow, smoky haze thick and stagnant around him, Don Tesdal walked between the familiar trees of the property he loved so much, the one he’d moved his kids to so they could experience a childhood in the woods, and turned on his camera.

The descriptions were needed. Tesdal’s home and neighborhood were burned beyond recognition.

“Damn. Oh my gosh,” he continued, talking as he walked and filmed. “This is my house. This is all that’s left of my house.”

His home’s charred tin roof laid atop the pile of rubble. In an interview Tuesday, he described throwing hoses and sprinklers on top of it before his family fled late Monday night.

Tesdal, a state employee and volunteer firefighter with the Idanha-Detroit Fire District, had gotten a phone call from his chief.

“[He said] ‘Well, why don’t you go ahead and wake everybody up? Get your family out. Wake up the neighborhood, and I’d like you to get everybody out,’” Tesdal said. Using a bullhorn and a fire engine he’d driven home he alerted neighbors.

Tesdal and his wife have seven kids total. Four are still young and living at home. It was decided he would drive one of the family cars, with all four kids. His wife would follow in another.

“I told my wife ‘Hey, we’re going to run into some potentially ugly stuff. We’re going to drive through it. Don’t stop,’” he said.

He followed his chief’s instructions: head east. West was too dangerous.

“I've got fire on both sides of the road at this point, logs across the road, and we're about as scared as a person can get,” he remembered. “[The] kids are asking questions. I'm trying to keep them on the down-low. Thomas asked ‘Is this normal, Dad?’ ‘No, Thomas. There's nothing normal about this right now. This is unusual.’”

Thanks to the blinding smoke, enough to hide lines on the roadway, let alone any trees that may have fallen, the family drove no more than 40 miles per hour.

Finally, they made it to Bend. Tesdal and his wife napped, unaware that, amid the chaos, neighbors had driven west.

“You're literally running for your life. Period,” said David Hart.

Hart, the neighbor with the new deck, and his wife Linda were awakened by someone shouting into a bullhorn. He assumes that was Tesdal.

They grabbed their wallets and dogs and jumped in the car.

A Marshal at the bottom of the hill told them to head toward Salem, he said.

“[There was] both sides were on fire. Gates was on fire. By the time we got to Mill City, Mill City was on fire,” he said. “The restaurants were on fire on the side of the road. All the businesses, the houses.”

After escaping, the hardest part both men said was living in limbo. Neither knew what was left of their homes or their city.

Tesdal’s videos, some of which show other parts of Detroit, cleared up the confusion.

The city they, and so many tourists love so much, is largely destroyed.

“That's why I posted the videos because I want you guys to know, if you're going back to see the beauty of Detroit, you're not going to find it in the landscape right now,” said Tesdal. “You need to think about what it is about living in Detroit that really meant a lot to you other than that tree in your yard… because that tree is gone.”