A look inside the Beachie Creek Fire area

In its path, the Beachie Creek Fire has left towns in the beautiful Santiam Canyon decimated, livelihoods wiped out and killed at least four people. 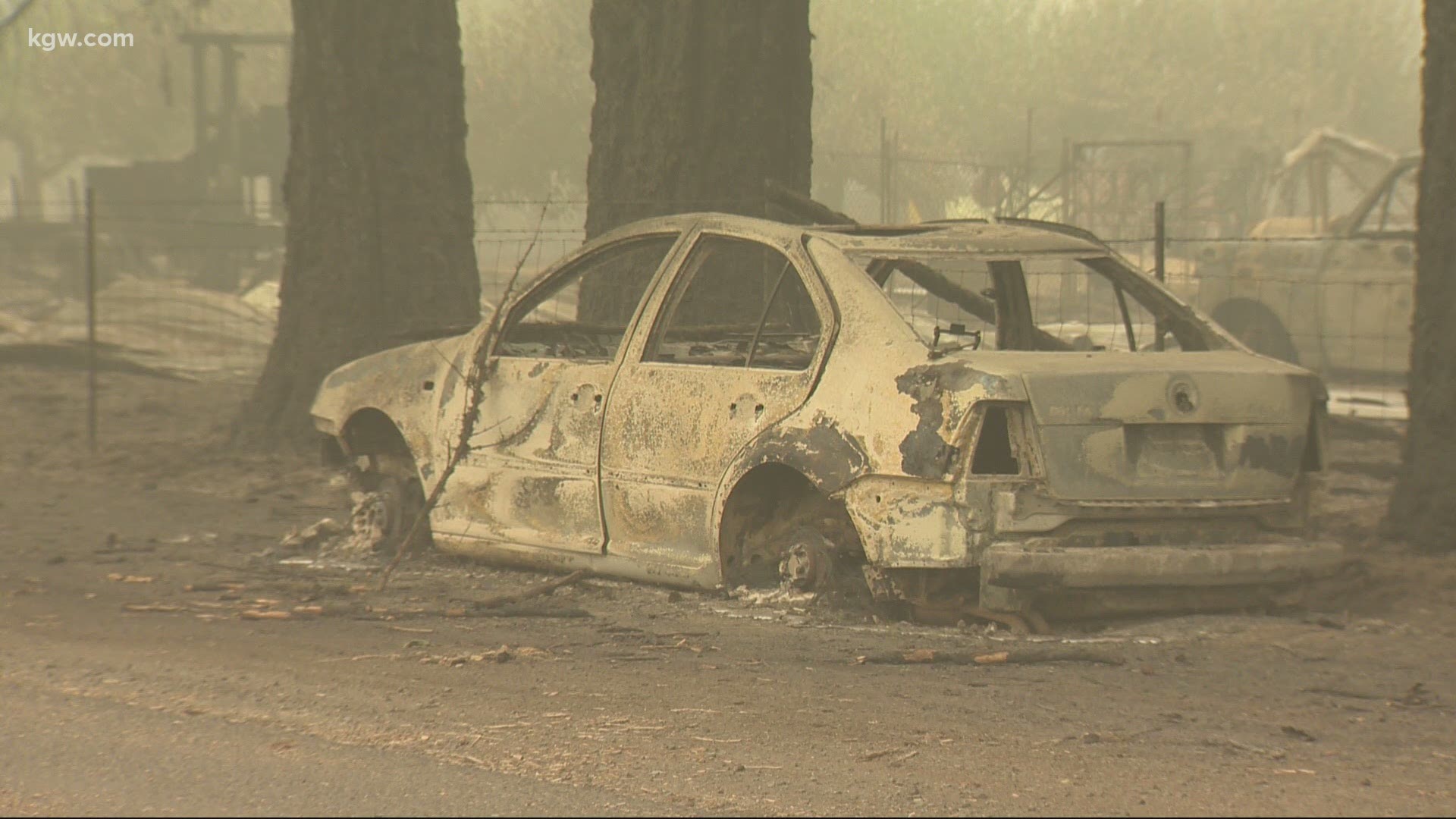 GATES, Oregon — Crews on the Beachie Creek Fire moved from evacuating people and protecting structures to trying to stop the spread of the fire. They're making progress thanks to better weather.

Sunday afternoon the city of Scotts Mills was reduced from a level three to a level two evacuation order.

The Beachie Creek Fire has burned nearly 190,000 acres and is zero percent contained as it continues to threaten homes and lives.

KGW got a look inside the fire area for the first time Sunday. Marion County Sheriff’s Office and Oregon State Fire Marshal’s Office took us along Highway 22 past the barricade from Mehama to the town of Gates, where the devastation is tangible and so much has burned down.

The tour - and fire crews - got a late start Sunday because of thick fog and smoke in the air.

Officials previously said the Beachie Creek Fire was expected to merge with the Riverside Fire in Clackamas County. The fires burn just one mile apart but officials don't believe the two will join soon like they originally thought.

In its path, the Beachie Creek Fire has left cars and signs warped under its extreme heat, ash and debris littering the ground, towns in the beautiful Santiam canyon decimated and livelihoods wiped out. The fire claimed at least four lives and crews are searching for five people reported missing.

“A lot of areas we’re trying to get to have very heavy obstructions with tree falls and significant debris and burn damage, [we’re doing] structural assessments to make sure it’s safe to go into structures to check for people,” Marion County Sheriff’s Office Sgt. Jeremy Landers said.

A look at destruction in the Santiam Canyon

Larry was a camp host at Fishermen's Bend Recreation Area in Mill City.

“I lost everything except what's in that bag, everything,” he said. “I called in the fire. I was the first one to see the fire and stayed for 30 minutes before the fire department came.”

As Larry focused on getting campers out, ferocious winds fanned flames all over the Santiam Canyon. It even forced the fire's incident command post in Gates to evacuate.

John Spencer, with the Beachie Creek Fire operations team, shared how dangerous things were when winds whipped up just days ago.

“We had a tree go down and drop a power line right onto our incident command post chain-link perimeter fence around the whole area and set everything on fire in 360 degrees around the incident command post,” Spencer said, “We had to engage that fire and all our folks from the team - and I'm talking planning, logistics, finance, people who don't normally fight fire - were fighting fire that night.”

While they worked to get that fire under control, numerous fires sparked all over the community of Gates and along the Highway 22 corridor. The extremely high winds blew fires rapidly and erratically, causing several of the spot fires to connect.

"We, at that time, pulled the trigger and had to get our resources out and we evacuated the town of Gates with our whole command post and went to the town of Stayton,” Spencer added.

But flames spread so quickly they had to evacuate Stayton the next day. Spencer said firefighters lost a lot of personal belongings but pushed on.

Amid the devastating and historic fires, many first responders grapple with loss themselves.

"The grief, displacement of their families, fear, the anxiety and then we’re hearing this all over  - the fatalities, the loss, we all feel it. Everybody feels it in that community,” Spencer added.

RELATED: ‘It was my little bit of heaven’: Community dreams of rebuilding after Detroit ravaged by wildfires

“Seeing areas that you enjoy going through such devastation is really hard to deal with or comprehend long term,"  Oregon State Fire Marshal’s Office Line Safety Officer Anthony Bucher said, "In the moment, our job is to get people out and rescue them - that wasn’t hard to focus on that - but now looking back, looking at what’s around us and knowing it played out throughout our whole state, it’s a devastating thing."

In its path, the fire has also left many stories of survival. Bucher said flames moved so quickly that people were fortunate to get out of their homes.

“I personally had an interaction with a couple that barely had time to get out bed and get out of their front door and jump in the river where they spent many hours escaping the flames and the smoke until one of our crews was able to pick them up and I transported them down to an OSP officer who got them out to safety.”

On Sunday crews were getting a scope of the damage in places that burned along Highway 22 and north, as well as working to assess structures, protect homes and clear downed trees in roads.

Firefighters are working with the sheriff's office, state police and ODOT on search and rescue efforts in Santiam Canyon.

This area is still too unsafe for the tens of thousands of evacuees to return. Fire officials ask you to please follow evacuation warnings and road closures to protect yourself and first responders.

“What have we not done? We have not mopped up our perimeter yet. We're just putting in the control lines right now,” Spencer said.

The mission over the next several days is to keep building containment and control lines around the perimeter on the west and northwest sides of the fire and work with landowners to build lines further out around the southern and southeastern end to stop the active spread there.

Spencer says the generosity and support from people in these communities who've lent resources and equipment has been incredible.

While they made progress, firefighters don't expect to tie up all the containment lines until later this week.

RELATED: Deputies will check on your home in Detroit or Idanha