Portland saw more than 100 nights of protest following the murder of George Floyd, activists have been calling for change. 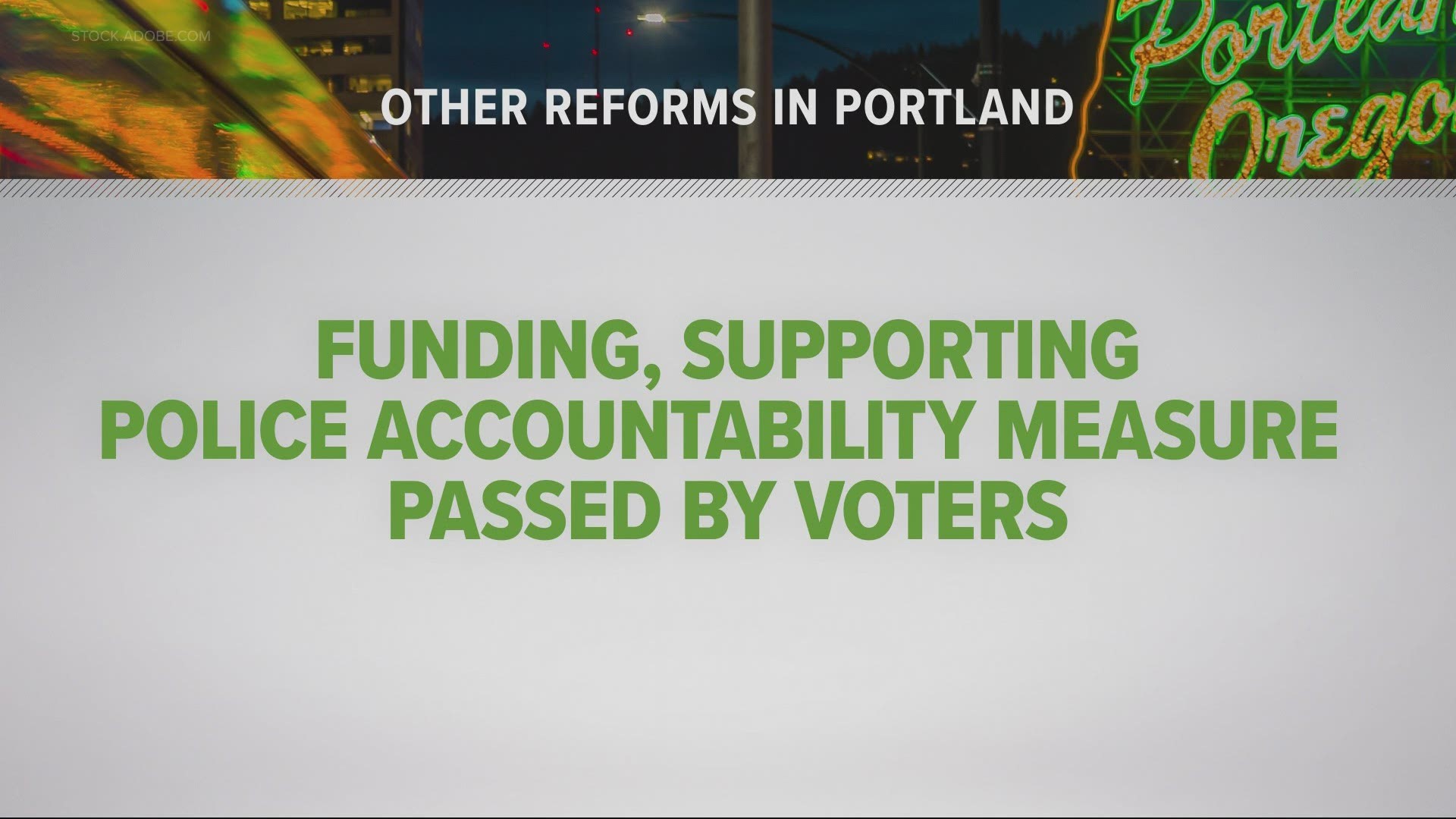 PORTLAND, Ore. — May 25, 2021 marks one year since former Minneapolis police officer Derek Chauvin murdered George Floyd by kneeling on his neck for more than nine minutes.

Since Floyd’s murder, there has been civil unrest across the country. The city of Portland saw more than 100 straight nights of protests, some of which were peaceful and others of which made national news headlines for the violence perpetrated by and against police.

“We have done so much in the past year,” said Portland activist Cameron Whitten. “I am grateful for that but let me be really clear and say I have concerns.”

"There are many different things and components that will make up a "reimagining of public safety". But none of those systems matter if there's no accountability," said police reform activist Candace Avalos.

Mayor Ted Wheeler said that the city has made “reductions and investments which advance police reform and reinvestment in community safety.”

This investment in community safety came at the price of a $15 million budget cut from the Portland Police Bureau (PPB) in 2020. Those cuts cost PPB three units including the Gun Violence Reduction Team (GVRT). That money was then diverted to community programs aimed at assisting people of color.

“We want to be full 100% partners in making communities safe,” said Whitten.

However, Daryl Turner, the president of the police union that covers Portland Police, argues that it should not be one or the other when it comes to keeping communities safe. He wants both strong policing and strong community programs.

In June 2020, Mayor Wheeler presented a 19-point reform plan. Nearly a year later, 13 of those 19 points have been addressed. Six points still remain in the works, including a ban on chokeholds as a means of restraint.

“A lot of the things people are asking for, we’d already been doing at PPB,” said Turner. “We are one of the most progressive police agencies in the country, in that light.”

Turner said continuous additional equity training has been part of what PPB has done for years.

In 2021, PPB will face the biggest cut of any city bureau and police reform activists, like Avalos, think the reallocation of money is important.

“Where we spend our money tells a lot about what we want,” said Avalos. “Those investments are important.”

An additional $9 million of ongoing money from the city's general fund will be cut from PPB. This year, however, it will be a net $3 million loss due to a one-time $6 million allocation to help speed up hiring at the police bureau and prevent a staffing shortage.

“You can’t defund an organization and expect them to be able to make changes with less money and fewer officers and without the ability to serve the public in a way the public wants to be served,” said Turner.

The mayor proposed ongoing money to triple the size of the unarmed Community Service Officer Program (PS3) within the police bureau. The mayor says the expansion will improve response quality for lower priority calls for service.

His budget also pays for another year of the Portland Street Response (PSR) pilot program, which was launched in February 2021. The Street Response team sends unarmed first responders to situations where people are deemed to be experiencing a mental health crisis.

"The spirit is about ensuring that this larger concept of public safety is shifted in a way that when people are coming into contact with a public servant that it doesn’t always come with handcuffs and a gun," said Avalos.

As of April, PSR was reported to have been taking only about two calls a day, with most calls not meeting the standard to dispatch the team out.

“I am very disappointed to see politics bogging down Street Response,” said Whitten. “We see that it is not getting the support it needs to be able to scale and to show that transformation of public safety as we know it is going to happen.”

The newly proposed city budget also includes more money to beef up the police records division and fully funding and supporting the implementation of the Police Accountability Measure that voters passed in November.

“It [the police accountability measure] created a completely independent oversight committee with the teeth to be able to investigate police malpractice and also to recommend and implement new policies with PPB as a whole,” said Whitten.

While the board is still in the works, it is a step in the right direction according to activists KGW talked to.

“It’s very groundbreaking in a lot of ways,” said Avalos. "The city is leading the way in the country in how reimagining what citizen oversight of the police looks like.”

The city council is also now involved in contract talks with the Portland Police Union.

During the height of the protests in Portland, Mayor Wheeler required approval before the use of tear gas and ordered PPB to track crowd control munitions.

Despite that directive from the mayor, PPB was federally sanctioned over its use of less than lethal munitions which was meant to force the agency to train officers in the use of less than lethal munitions. It is still up in the air whether the Portland Police Bureau will be taken over by a federal judge. But the use of force in PPB has been monitored federally for nearly a decade.

Reforms are not only reflected in cuts in the budget, but also in the creation of new jobs. Portland changed its approach to gun violence by allocating $4 million for community groups and another $1 million for unarmed park rangers.

Resources were also shifted for the creation of a few new law enforcement teams to enhance shooting investigations.

But the union argues that's not the way to address skyrocketing gun violence in the city.

“You’re not able to proactively police the city so you can slow gun violence, domestic violence and all other things in between,” said Turner.

The metro area has seen a spike in overall violence compared to last year. So far, Portland has seen 32 killings - 24 of which have been by gunfire - compared to four cases this time last year.

Both the FBI and the Bureau of Alcohol, Tobacco, Firearms and Explosives are working with PPB on gun violence cases.

Activists say that Portland’s leaders have listened to some demands, but they agree that there is still work to be done to protect Black lives.

"There's a lot to be desired, but I definitely think there's been progress," added Avalos.

“Their lives matter as much as they did a year ago,” said Whitten. “Their lives have always mattered. So, I know we got so much done in the past year, I am calling on folks to reflect now that we are a year past, and realize that justice and a better future we all want and deserve is going to require our renewed action, persistence and presence.”