Updates on the protests happening in the Portland area on Tuesday, June 2. 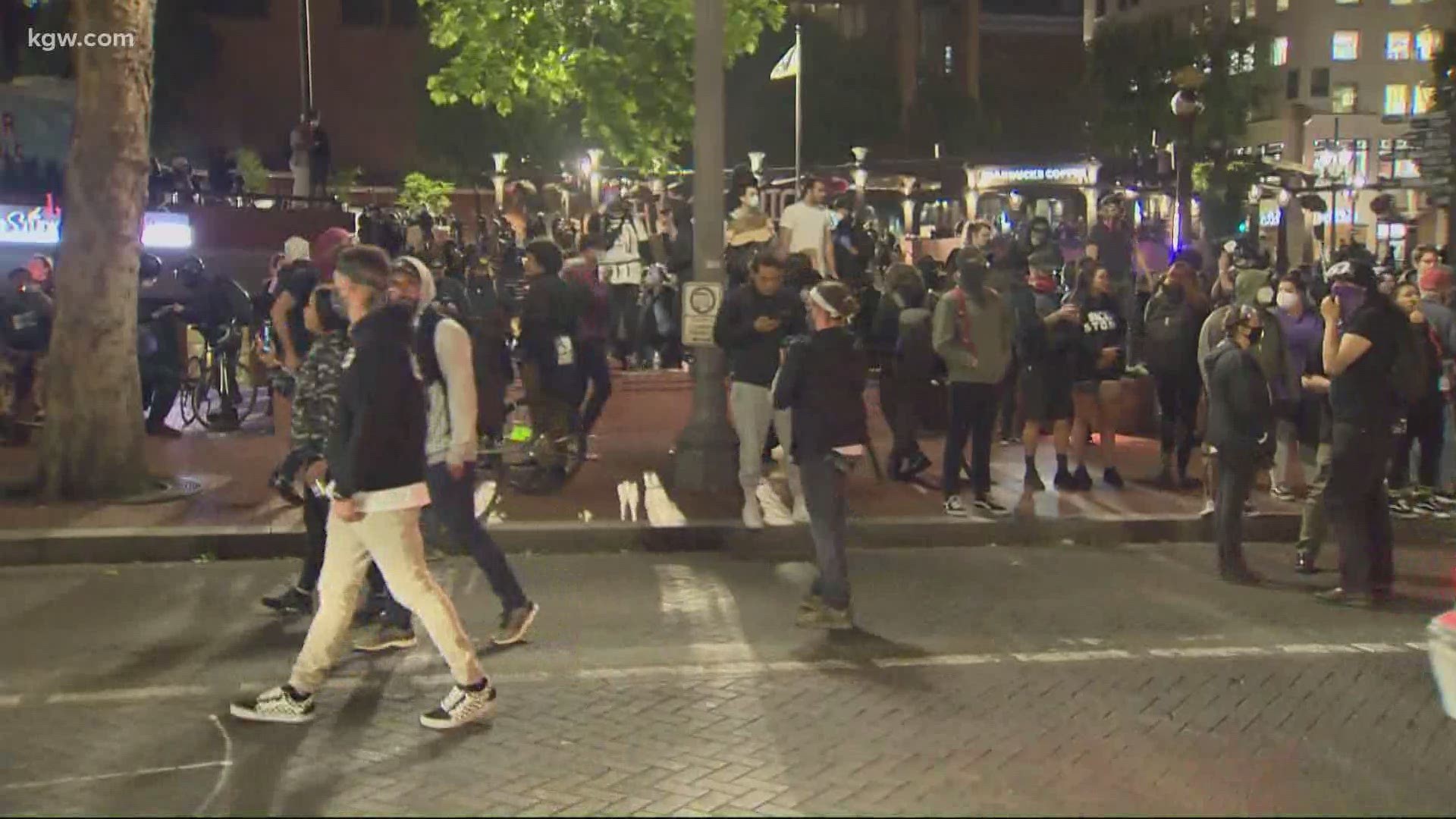 PORTLAND, Ore. — Demonstrations continued in Portland for the fifth consecutive night to protest the death of George Floyd in Minneapolis. Floyd, a black man, died in police custody after an officer knelt on his neck for nearly nine minutes.

On Tuesday evening, for the second night in a row, a peaceful gathering of thousands lasted for several hours before a smaller gathering of hundreds was declared an unlawful assembly.

Here's a look at updates as they happened throughout the night.

KGW anchor and reporter Maggie Vespa posted a video that shows a Portland police officer nearly run over a protester. The incident occurred around 12:14 a.m.

This was the clip that made @LauralPorter & me gasp on live TV.

We saw people moving barricades & equipment around Pioneer Square... when a police SUV came speeding through. Ppl ran out of the way.

This was around 12:14 a.m. @PortlandPolice can you tell us what happened? pic.twitter.com/K7ejbx1FHi

Most of the crowd has left downtown, with the exception of a few dozen people left in Pioneer Courthouse Square. Police have ordered them to leave the area, saying, "Any person in the area must leave now or be subject to arrest or use of force, including riot control agents and impact munitions." Police also said remaining demonstrators in the vicinity were throwing aerial fireworks, damaging property and blocking traffic.

This is an unlawful assembly and we continue to advise the crowd to leave the downtown area. To those who are--thank you!! We have already made multiple arrests and will continue to do so.

Police declare an unlawful assembly again in the area near the Justice Center. People are told to leave or they could be arrested. Officers have deployed tear gas and flash bangs. 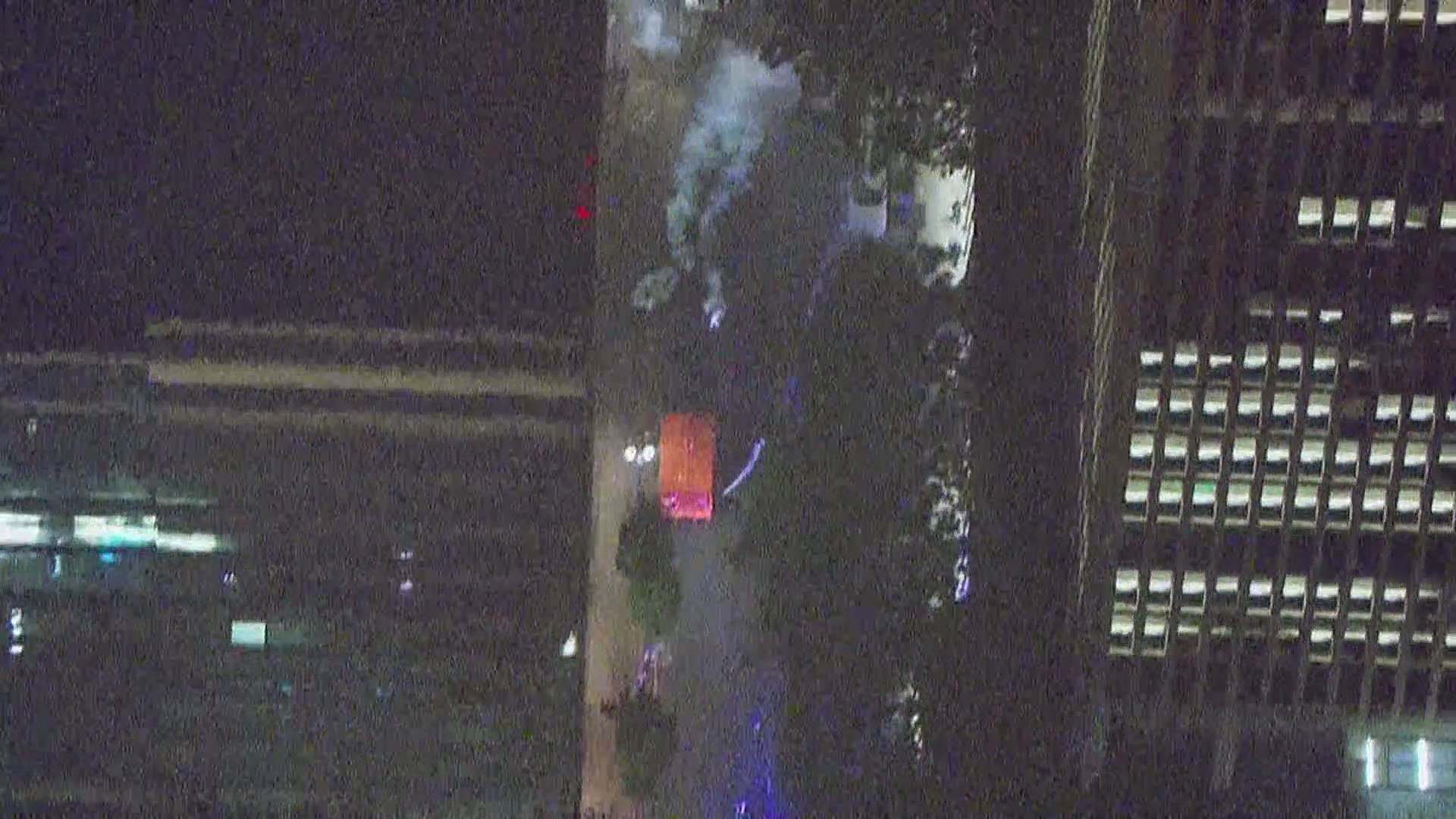 Portland police say a crowd has returned to the fencing at Southwest 4th Avenue and Taylor Street outside of the Multnomah County Justice Center. They say no one is tampering with the fence.

The large crowd remains on SW 4th and Taylor near the fencing surrounding the Justice Center. We appreciate that no one is trying to tamper with the fence. Let's keep this peaceful.

The Oregonian/OregonLive reports the large group of peaceful protesters that gathered at Pioneer Courthouse Square earlier in the night disbanded after returning to Revolution Hall in Southeast Portland.

The group that returned to the east side is wrapping up. Speaker says, “Tonight y’all can sleep, but best believe we will be back tomorrow!” They’ll reconvene at Revolution Hall at 6 p.m. (report/video via @HaleJamesB) pic.twitter.com/1O2QsM5CMe

In a statement, the Oregon Justice Resource Center said Portland police's use of flash bang grenades and tear gas against protesters is reprehensible. "It goes beyond the realm of an appropriate response to those standing against police violence and racial injustice," the organization said.

The Multnomah County Sheriff's Office says a peaceful group of demonstrators left the downtown area on the Burnside Bridge, heading to the city's east side.

Portland Fire and Rescue are advising the peaceful protestors to leave Pioneer Square and head back over the Burnside Bridge to avoid downtown as the unlawful assembly continues.

Attention Peaceful Protestors! Please exit the downtown area by heading north from Pioneer Square to Burnside and head east over the bridge.

There are multiple groups downtown throwing projectiles at police. Police are responding with flash bang grenades and tear gas. The peaceful protestors are making their way back over the Burnside Bridge.

Chief Resch with the Portland Police Bureau gives an update about the two different groups protesting.

Situation update about actions right after 9 pm: Some peaceful demonstrators in Pioneer Square. Some violent and aggressive actions near Justice center. Police respond with riot control agents to disperse those engaged in criminal activity. pic.twitter.com/VSA6slw3ib

Thousands of peaceful demonstrators are leaving Pioneer Park and marching back across the Burnside Bridge.

Thousands are now leaving Pioneer Courthouse Square to peacefully march back eastbound on the Burnside Bridge. Drivers please use caution in this area. Thank you everyone for keeping this event peaceful!

Police say the unlawful assembly is a group of hundreds that are not with the group of thousands peacefully protesting in Pioneer Square.

We continue to appreciate the thousands who are gathered peacefully in Pioneer Courthouse Square, while another smaller group is causing destruction and throwing projectiles at officers on 4th and Taylor. That has been declared an unlawful assembly. One arrest has been made.

The group, not part of the peaceful protest, at SW 4th and Taylor began throwing projectiles at police. Police retaliated with what appear to be flash bang grenades.

Members of the crowd at SW 4th and Taylor are throwing projectiles at officers. This is an unlawful assembly and everyone needs to leave the area now. Once again, this is not associated with the peaceful assembly at Pioneer Courthouse Sq.

An unlawful assembly has been declared at 4th and Taylor. This is unrelated to the large gathering at Pioneer Square.

We acknowledge and appreciate the thousands that are peacefully demonstrating at Pioneer Courthouse Square.

Demonstrators back at the square #GeorgeFloyd pic.twitter.com/v8AZpy4vD6

A truck sped through an area crowded with protesters. No one seemed to be injured. Police are advising that drivers be cautious in areas with peaceful protesters so everyone stays safe.

A pick up truck just raced thru 4th & Burnside intersection. Very scary. Doesn’t appear anyone was hurt. Some demonstrators gave chase but truck took off. pic.twitter.com/X3sdwwLuRI

Thousands of peaceful demonstrators take to the Burnside Bridge.

A peaceful march begins in inner SE Portland toward Burnside where they layed in solidarity with George Floyd.

Back to marching, maybe back to the square but unclear #GeorgeFloyd pic.twitter.com/Zh4dHNoIcm

A large group of protesters has gathered at Revolution Hall in Southeast Portland.

Protesters gathered in Cedar Mill, a Portland suburb, to show their support for George Floyd.

“Black lives matter!” A group of neighbors from Cedar Mill show their support for George Floyd at NW Cornell & Murray. Many groups from suburbs and small towns are joining the movement to end systemic racism. pic.twitter.com/BmvMHTOA0z

Demonstrators staged a die-in on the Burnside Bridge.