70 cats, 14 of which are big cats, have had traumatic histories prior to coming to the Wildcat Ridge Sanctuary in Scotts Mills. 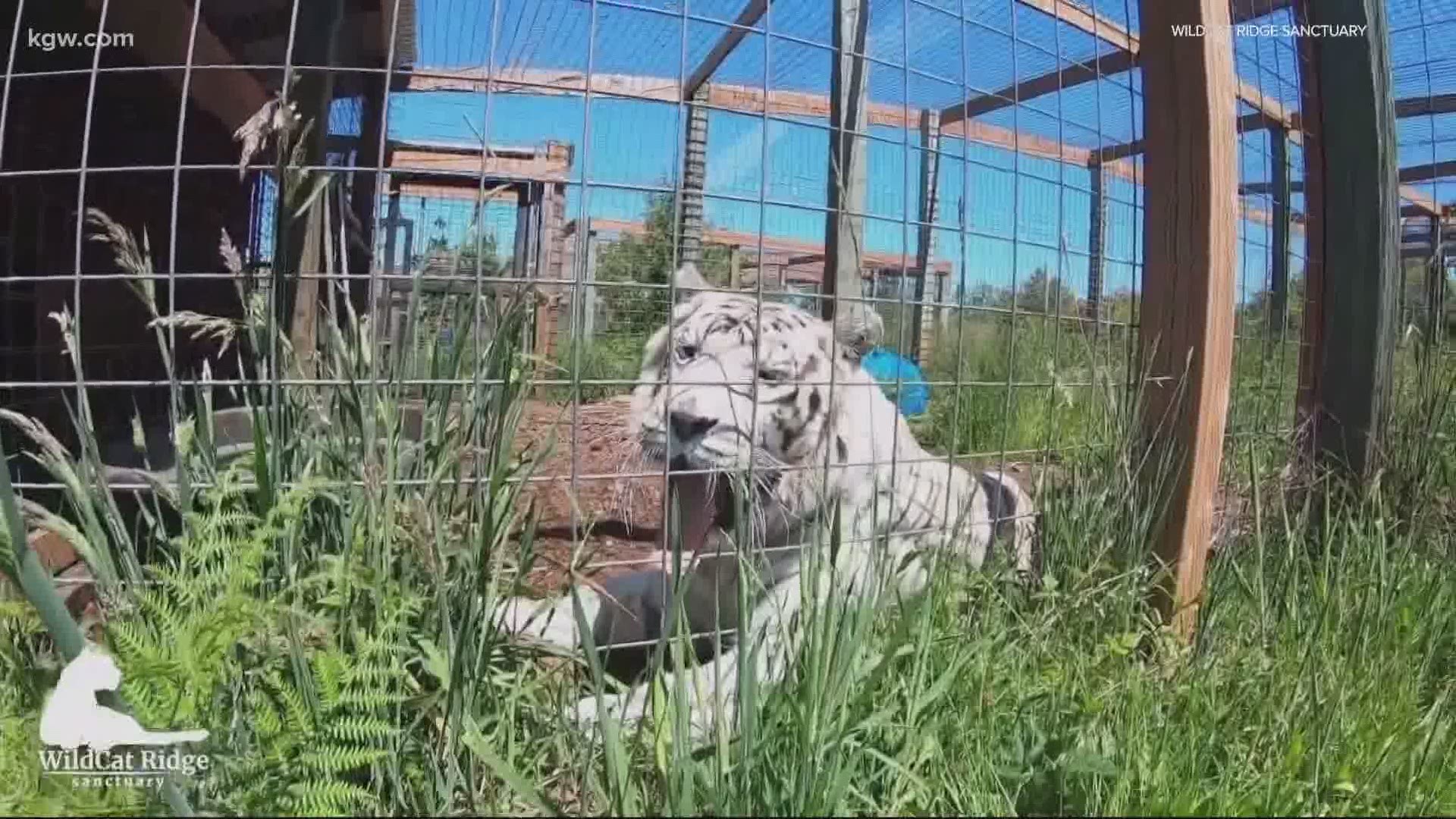 SCOTTS MILLS, Ore. — When the Beachie Creek Fire broke out, it forced entire communities to evacuate.

Those evacuations also impacted a home to big cats.

Ian Ford, the executive assistant at WildCat Ridge Sanctuary said a little over a week ago, volunteers and staff rushed to make sure their lions, tigers, cougars, and other smaller cats were safe from the fire.

“We consider ourselves a retirement home for captive-born animals. Every cat that we have was a pet at one point in time,” said Ford.

He said he understands why people might think it’d be cool to have a big cat as a pet, but often, they quickly find out it’s a terrible idea.

“I get why people want to have a big cat for a pet. They’re cool as hell. But it’s a tiger. You can’t have a tiger as a pet. I don’t know how else to explain to people that you can’t own a tiger as a pet,” Ford said.

The sanctuary is a non-profit located in Scotts Mills. Rather than have an animal put down, they can live out the rest of their lives at the sanctuary, which spans about 80 acres. Ford said in alignment with their mission, they are not open to the public, like a zoo. Though on its website, the sanctuary says it does offer some private tours of small groups.

“We wanna see our cats with their paws up, rolling in the grass laying on their back just enjoying their life as an animal instead of being on display, being used as prop, being used to make money,” Ford said.

He said their 70 cats, 14 of which are big cats, have all had traumatic histories.

“So the last thing we wanna do is make them feel nervous when we just want them to be able to relax,” he said.

When the Beechie Creek Fire broke out, it was hard for the cats or their keepers to relax.

“Everybody remembers the sky was orange and the air was thick,” said Ford.

He said the cats’ keepers along with an army of volunteers rushed to get all the cats at the sanctuary to safety.

“Holy cow there’s 40 people helping us move stuff,” Ford recalled thinking. “Everybody’s just jumping in, what can I do? How can I help?”

They were able to get some of the smaller cats like the bobcats and servals to a safe place in Molalla. But a few hours after they arrived, that area also was under an evacuation notice. So they moved to a place in west Salem where they met a big-hearted farmer who offered up his barn.

“Mentioned ‘Hey I got some property. It’s in the McMinnville area.’ So it was much farther away from the fire,” said Ford.

After the smaller cats made it to the barn, the big cats followed. The lions, tigers, cougars, and cheetahs stayed a night in the barn, then headed to Wildlife Safari in Winston.

“We don’t usually take 14 cats to the vet at one time, so we don’t have 14 big animal crates. So the zoo stepped in and helped us a lot there,” Ford said.

In the meantime, the smaller cats have stayed at the barn, waiting.

“My mom and stepdad are homeless right now, basically and all these animals are displaced. But we built a bunch of dog kennels so that the animals aren’t in their crates anymore. They have room to walk around,” said Ford.

He said the sanctuary was not burned, so he hopes that in the next few days the cats will be able to relax again in more familiar surroundings at home.

“It’s hard to see that and not do something about it.”

From the firefighters to all the volunteers, Ford says he knows he’s got a lot of thank you notes to write.

“It’s hard to figure out who to give all the praise to because it feels like there’s so much praise to go around. But you know, without the firefighters out there […] we probably wouldn’t have anything to come back to,” said Ford.

“There’s just something about that collective humanity coming together to do something with no payoff for themselves.”

At this point, Ford is thinking ahead about how to get all the cats back to the sanctuary. It’ll be another labor-intensive and expensive task.