Every day, in the Gates Community Church of Christ parking lot, community volunteers serve up meals to hundreds of people who need them three times a day. 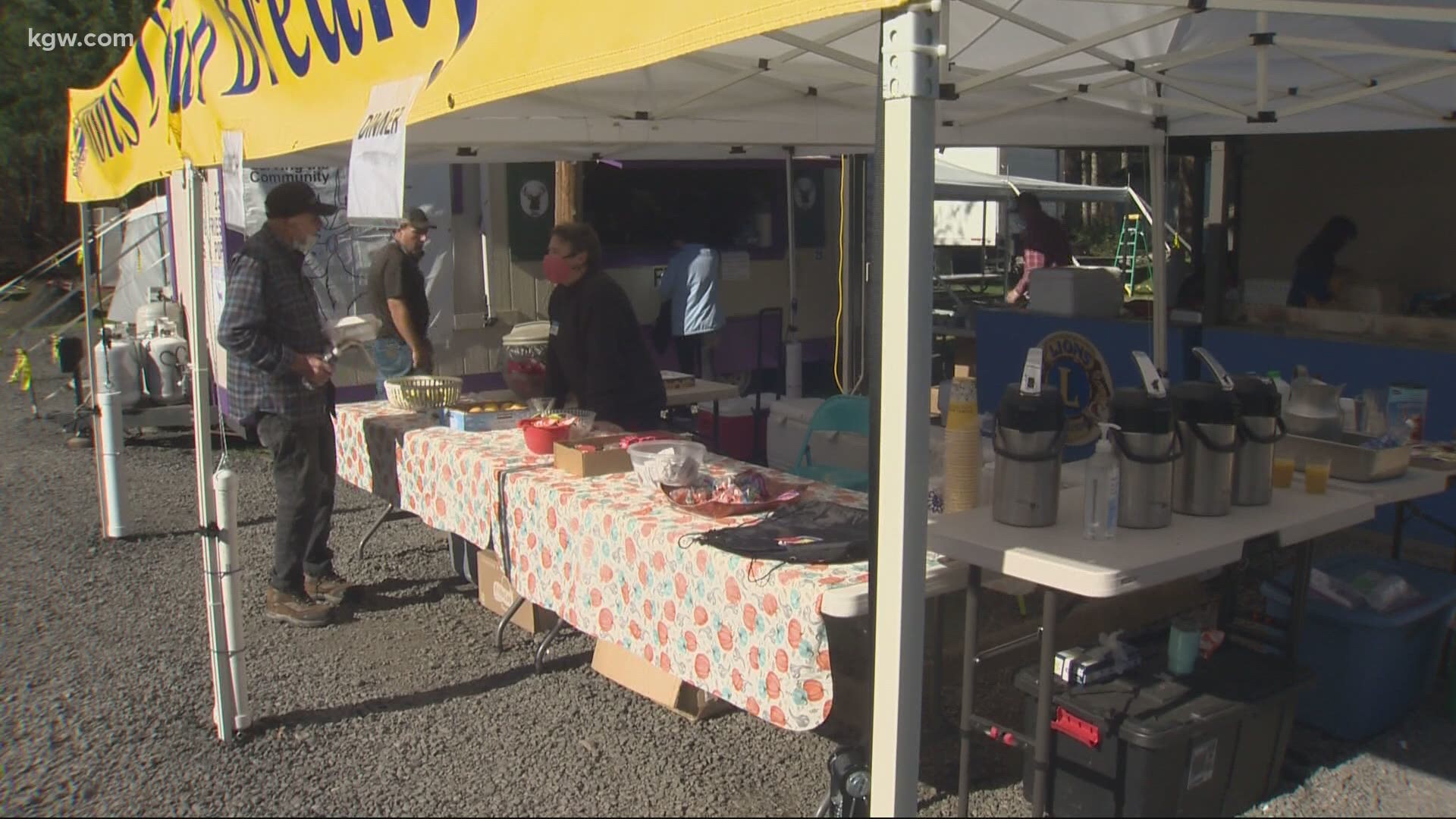 GATES, Oregon — It’s a long, slow road ahead for people in the Santiam Canyon who are setting their sights on rebuilding after the Beachie Creek Fire tore through towns there in early September.

But there are volunteer efforts that have been underway that have really helped families. One person grateful for the help, is Bruce Bailey. He and his wife decided to retire in Gates. They bought a home they thought would their ‘forever home.’

But then, the Beachie Creek Fire swept through the Santiam Canyon burning houses along the way, including Bruce and Kathleen Bailey’s home. Everything on their property burned.

“When we were escaping our house, our house was already on fire. Windows were exploding,” said Bruce Bailey.

He said his wife Kathleen was badly burned trying to save their more than 20 goats. They were only able to save one, their oldest goat named Nutmeg.

Credit: Bruce Bailey
Nutmeg, the only goat the Baileys were able to save

Bailey lost his beloved cats in the fire as well, but each day is a little easier thanks to the help and kindness of volunteers.

Every day, in the Gates Community Church of Christ parking lot, community volunteers serve up meals to hundreds of people who need them three times a day.

“We’re about the only ones here still operating,” said Ward Frederick with the Silverton Lions Club. Frederick said he called up his friends at the Silverton Elks Lodge and spearheaded the operation when he heard about the need in the canyon.

“Both organizations have equipment they don’t use most of the year and I have a restaurant background, and I figured, well, why not put all this together,” Frederick said.

Frank Bartruff with the Silverton Elks Lodge said he’s in the church parking lot seven days a week, only missing two days since the effort began.

“I told him [Ward Frederick] I was going to volunteer to do this and I was gonna stick it out until we served everybody that needed to be served and did everything we could to help out,” said Bartruff.

Frederick said he wishes they could do more than provide people with meals, but they’re just doing what they can. The plan is to continue operations until November 21. On that night, Frederick said volunteers will serve up an early Thanksgiving meal. People in the community are grateful for the help.

“They’ve been a huge blessing to our community. Even people who still have their homes, some of them can’t get into it because of smoke damage and insurance, waiting for it to be cleaned,” said Mike Stair. Stair is the minister of Gates Community Church of Christ.

“When adversity comes, it brings out the worst in some people and the best in most people, and what we’ve been able to see in our community is the best in people coming together and working together, and it is going to be a long haul,” Stair said.

Bailey knows it’ll be a long road ahead, but he’s appreciative of the help now.

He said this is the first time he’s been on the receiving end of this kind of generosity. For the last 40 years, Bailey said he worked for AmeriCorps, helping to coordinate emergency services during disasters all over the country.

“My last big operation I was involved in managing people was in Paradise after the Camp Fire in Butte County, California,” said Bailey.

He and his wife plan to rebuild and stay in Gates.

“I’m hopeful that will work out but we’re going to continue to be part of the canyon community.”