Supporters say they want to show solidarity with the detainees, some of whom have been separated from their families. 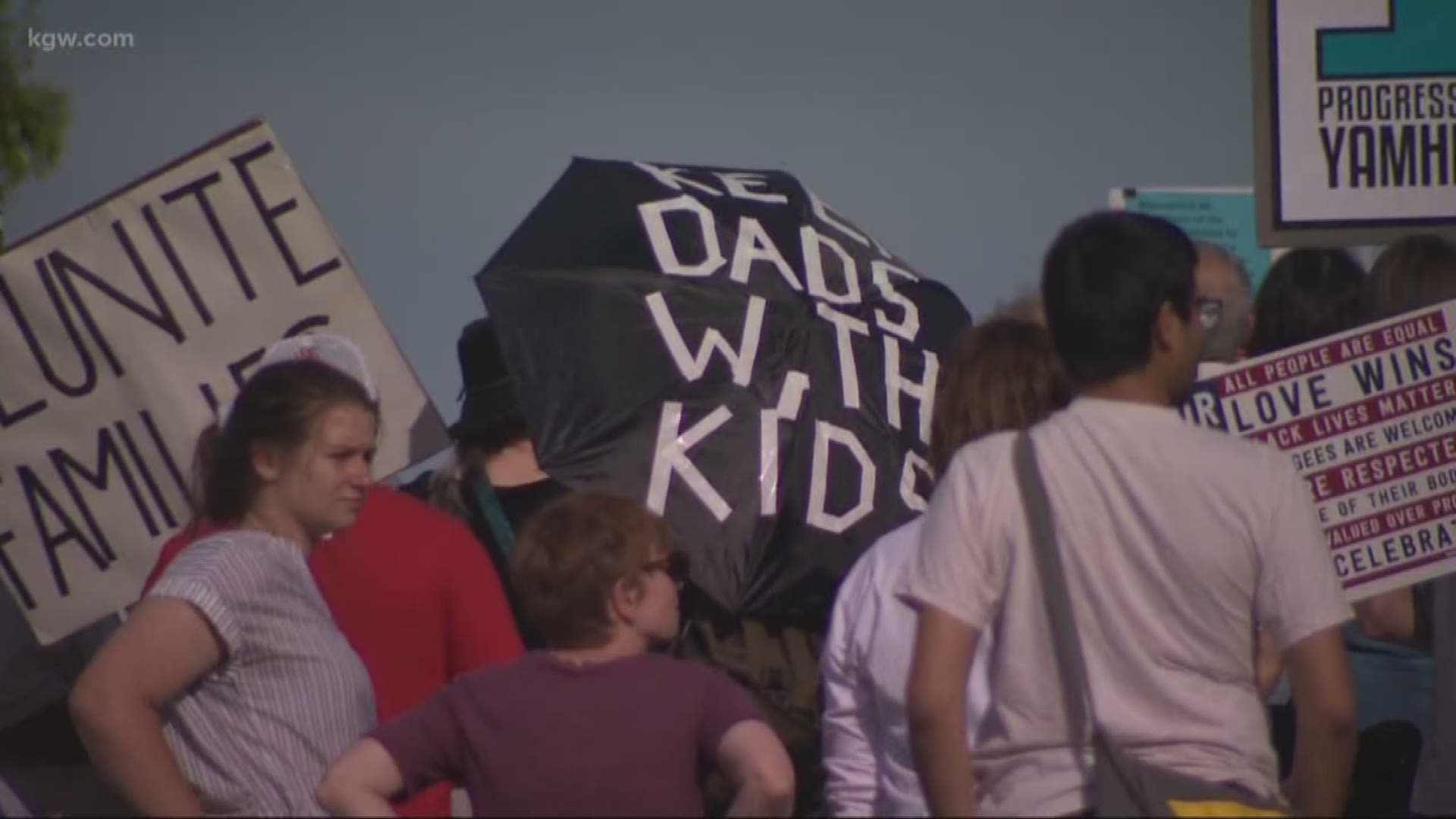 SHERIDAN, Ore. -- Several hundred people gathered near the federal prison in Sheridan Monday evening to protest the detention of 123 asylum seekers as outrage over the federal government's immigration policies continued to crescendo nationwide.

The crowd, from toddlers to senior citizens, gathered in a park immediately outside the fence at Sheridan Federal Correctional Institution to sing and pray. Guards and inmates watched from the other side as protesters waived signs, including "Keep families together," "Make America compassionate again," and "Children are innocent."

"We as a community stand here outraged that asylum seekers and immigrants are being treated as criminals," shouted Miriam Vargas Corona, executive director of Unidos, a nonprofit serving immigrant families in Yamhill County.

"A federal prison is not a place to detain immigrants," she told the crowd.

The protesters urged Oregonians to tell their elected officials to maintain pressure on Immigration and Customs Enforcement officials and the prison system to allow detainees access to lawyers, clergy and medical care.

Six of the men held at Sheridan reportedly were separated from children when crossing the southern border, and it's that reality that has sparked so much anger nationwide in recent days.

Over the past six weeks, more than 2,000 children were separated from their parents while crossing the border. The increase in child separations are the result of a new federal "zero tolerance" policy announced by Attorney General Jeff Sessions in April and May of this year.

The policy means that every person caught illegally crossing the border will be criminally prosecuted and their children, who won't be prosecuted, will be separated from them.

The children are at least initially held in locations including warehouses, repurposed big-box stores and "tent city" detention centers. Indoors they are kept in cages made of chain-link fencing.

Nonprofit investigative news organization ProPublica published Monday audio from inside a U.S. Customs and Border Protection facility where 10 children had just been separated from their parents. "Many of them sound like they’re crying so hard, they can barely breathe," reporter Ginger Thompson wrote.

Trump administration officials have answered questions about the policy in a variety of ways, including: denying its existence and saying they are just following the law, blaming Democrats for the family separations, or defending the policy as a deterrent to illegal immigration.

The federal prison in Sheridan became a piece of this increasingly explosive debate after the 123 men were moved here in mid-May. They came from countries all over the world, including India, Nepal, Peru, Russia, Honduras, Guatemala, Armenia, China and Brazil.

Four members of Oregon's Congressional delegation visited the prison Saturday and relayed to reporters what they saw inside. While none attended the vigil Monday, a statement was read by on their behalf by Stacey Jochimsen of Sen. Jeff Merkley's staff.

"This is urgent business and we are working to fix it," read a joint statement by the Oregon delegation read at the vigil Monday. "We stand with you tonight in solidarity to end this Trump cruelty of ripping apart parents and children — and lumping together human beings without thought for their medical, spiritual and legal rights."

According to a letter written by public defender Lisa Hay, detainees are locked in triple-bunked cells for up to 23 hours per day, meals are small or of low nutritional quality, medical care is lacking, phone calls are expensive or unavailable and language barriers persist, potentially exacerbating these problems.

Hay wrote that she personally interviewed 49 of the detainees, and 20 more called into her office.

The letter was sent to Sheridan Warden Josias Salazar on Friday, urging him to "make changes to end the unacceptable conditions." She also suggested that the influx of inmates may have stressed the prison's systems and staffing and hoped a solution will be devised quickly.

"Any effort to effectuate a policy of deterring asylum-seekers through use of punitive conditions of confinement would raise serious constitutional concerns," Hay wrote. "And in my view, confinement under the conditions described by the detainees already violates our law and our values as a country."