"Had the USS Ingersoll not spotted us and abort their mission and turn around to pick us up, we would have perished for sure," Huynh said. 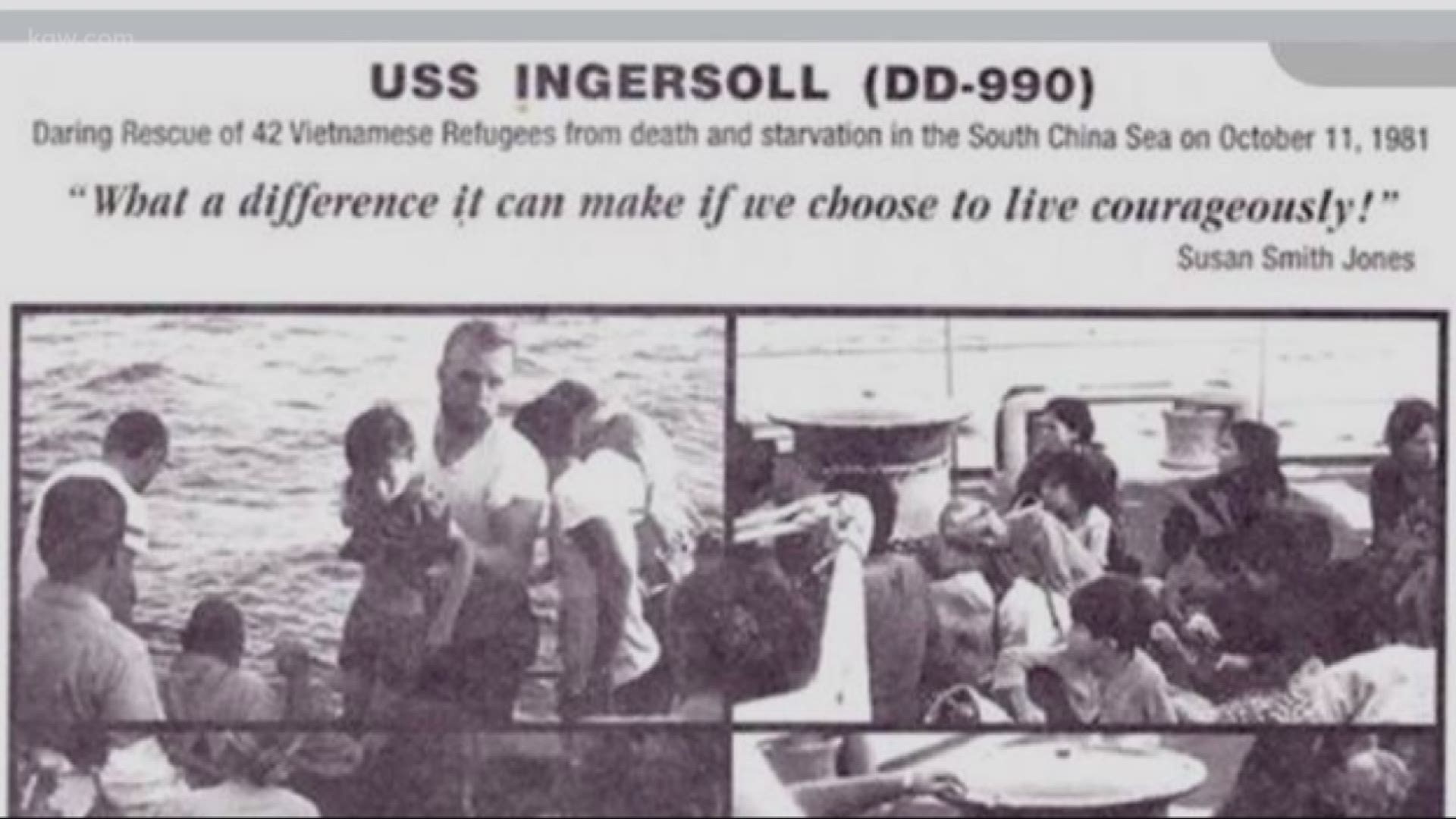 It was October 11th, 1981. Anne Huynh was only three years old. But she remembers how hard it was for her family to escape from Vietnam.

“We made four attempts to escape, and the first three we failed so they threw us in a communist prison,” Huynh said.

That fourth attempt was a success. But it almost wasn’t. She and her family found themselves floating in a boat in the middle of the South China Sea along with a number of other Vietnamese refugees.

“Had the USS Ingersoll not spotted us and abort their mission and turn around to pick us up, we would have perished for sure,” Huynh said.

The man who spotted them on the USS Ingersoll was Dale Jolliffe. He was on watch duty.

“It was early morning, probably five or six,” Jolliffe said. “I saw something, an object.”

He thought it was a box, or maybe a piece of debris. But it was the boat occupied by Vietnamese refugees that included Anne, her older sister Elaine, as well as her mother and father.

“It wasn't seaworthy, “said Jolliffe. “It was a boat that didn't belong in the middle of nowhere.”

He immediately told his captain.

“I think there’s somebody in distress. I think we should go over there and find out what's going on,” Jolliffe recounted.

Thanks to his watchful eyes, the refugees were rescued.

“It was the right thing to do,” Jolliffe said.

On Saturday morning, Jolliffe along with two of his former crewmates sat in a Vancouver Vietnamese Pho restaurant.

They waited to meet the family they helped save. For Jolliffe, it would be his first time.

The meeting was thanks to Jolliffe's crewmate, Philip Madlem who goes by Pete.

A handful of years ago Madlem got a message from Elaine, one of the refugees in the boat.

“She said, ‘Do you know who the lookout was?’ Because Captain Ed had told her that he wouldn't have turned the ship around had it not been for the lookout,” said Madlem.

For years he searched. Then he finally got a response on a Facebook page dedicated to USS Ingersoll crew members.

Fast forward to 2018, and Jolliffe, Madlem, along with their fellow crewmate Doug sat waiting to finally meet the Huynh family they rescued.

“Thank you, Dale,” said Huynh as she approached and hugged Jolliffe.

“All this happened because of you. I can't express my thanks enough. We're so grateful for you,” Elaine Hsu said.

Hsu was on the boat as well. She was five years old.

“It’s one thing to be rescued and to be grateful,” said Huynh. “It’s another thing to be able to find your rescuers and tell them how grateful you are.”

“It's not about us,” Jolliffe said. “We just was out there doing what we do.”

Then when you thought things couldn't get much better, there was a surprise birthday celebration.

“Wanted to give you this for your birthday,” said Madlem as he handed Kay Huynh, Anne and Elaine’s father, a gift.

He and his family were given USS Ingersoll hats.

When Kay came to the states with his wife and daughters, he couldn't remember his birthday since often records are not kept in small towns in Vietnam. So Kay picked the date that held the most significance.

“October 11th. I picked that day for my birthday,” Kay explained.

It was the day his family was saved, thanks to the actions Dale Jolliffe and his crewmates.

“We weren't gonna leave you out there,” said Jolliffe.