VERIFY: Do states that legalize marijuana have 25% fewer opioid deaths? 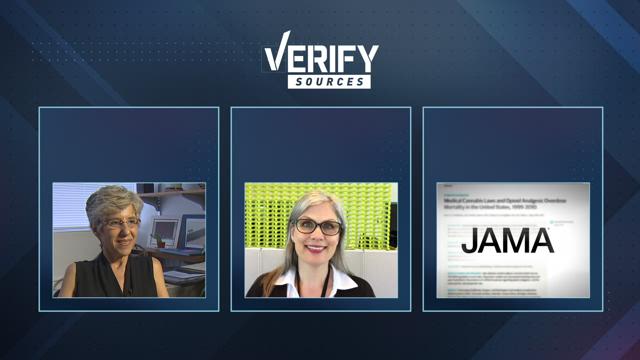 You may have seen the billboards throughout Seattle with a very pro-cannabis claim: "States that legalized marijuana had 25% fewer opioid-related deaths."

2014 study on marijuana in the Journal of the American Medical Association.

"It hit me in the face as a researcher as something a little deceiving," said Dr. Carlini.

She says the billboard makes too much of a blanket statement about curbing opioid-related deaths with marijuana use.

At the end 2012, Washington state voters approved Initiative 502, becoming one of the first states to legalize marijuana for recreational use.

For the claim to be true, Carlini says you have to consider all types of opioid deaths, including heroin overdoses. She says the legalization of pot has not caused or coincided with a 25 percent reduction in those deaths.

Plus it's been too brief of a period to study marijuana's impact.

"It's not a light switch," said Dr. Carlini. "It's not because you legalize that the next day people are going to behave so different that it's going to impact their mortality rates. That's not how life works."

Julie Graham referred us to the Washington State Department of Health's latest statistics on opioid-related deaths in Washington state.

Based on our sources and how the billboard is worded, we found its claim to be FALSE.

If you look closely at the fine print of the billboard, it cites a 2014 study in the Journal of the American Medical Association. We looked it up.

The focus was only on states which had legalized medical marijuana. For those states, the opioid death rate was "24.8% lower." But it did not establish a direct connection between the two drugs.

"That being said, it's a very important study that I would invite everyone to take notice," said Dr. Carlini.

Weedmaps, the company behind the billboard, is a marijuana dispensary review site, sort of like the Yelp for pot.

"Opioid abuse and opioid-related deaths in our country have reached crisis proportions. A growing body of credible research indicates that cannabis can be used in conjunction with current treatment methods."

"Our billboards provide communities with cited facts about the social effects of legalizing cannabis. "

KING 5's research found this 'cited fact' is not true.