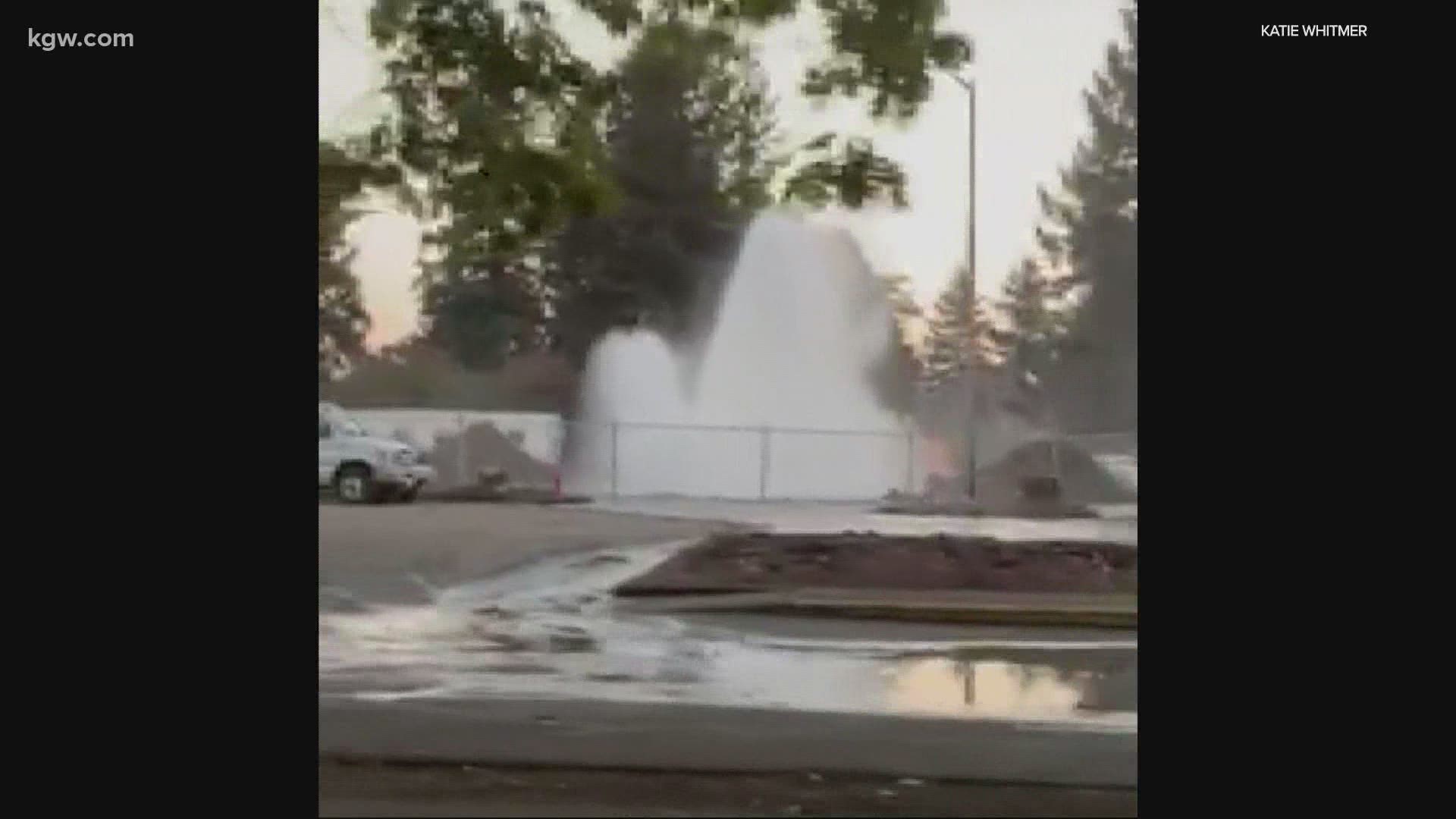 In a release, the City of Vancouver wrote, "The break appears to have been related to construction activity at a nearby development project. Private contractor crews for that project quickly responded to try to stop the flow, but were unable to do so as a result of the size of the pipe and severity of the break."

The city said the broken section was going to be removed in the next 10 days as part of the development. About 1.4 million gallons of water spilled out and into the nearby Fort Vancouver Regional Library (FVRL) Operations building, according to the city.

"This is where the water line hit," FVRL spokesperson Tak Hendrick said pointing up to a line on a garage door of the loading dock in the back of the building. "Clearly, well over my head."

On Tuesday afternoon, inches of mud still lay on the floor of the work space that housed tools and other equipment. Inside the mailroom, a postal machine was found destroyed by the flood waters Tuesday, which will impact mail orders. Kendrick said the library had just expanded their mail order deliveries for all library patrons on Oct. 1. Kendrick said mail delivery was impacted badly by the flood.

"We definitely lost five big vehicles," Kendrick said referring to courier vehicles and a box truck that were inside at the loading dock or outside. "So, if someone wants a book and they want to pick up that book in Ridgefield but the book is in Goldendale, our courier helps move that around."

Kendrick said the flood will set back courier deliveries by a day or more.

The operations center housed books, new and old. Books that hadn't yet been put in the library's circulation were housed in the basement, many on shelves that sat inches from the basement floor. Kendrick said anywhere from 2 1/2 feet to 5 feet of water flooded the operation center's basement.

"A significant amount of books, there's usually so many books here that, I wouldn't be able to estimate how many books we have here," Kendrick said.

"We were able to salvage most of our historical binders," Giffuni said. "Every library that we build or remodel we had, had all the right finishes, fabric, all the historical thing we kept for each one."

Pointing to a bookshelf in the back of her office, she says everything from the second shelf down wasn't salvageable.

"We're just trying to get whatever we can. It's just heartbreaking," Giffuni said.

Near the IT department's area of the basement, a pile of a dozen or more brand new Dell computer monitors still in the box are soaked with water. Kendrick said the damage to the IT computers is in the thousands.

One bright spot: the servers that house online books and content were held at another location.

Print books will be delayed by a few weeks as the library tries to find the titles at other locations.

"It definitely is gut-wrenching, both from a work standpoint as one of the directors of the district. It's absolutely horrifying to think about the volume of work that we have lost," Kendrick said.