“The racial slurs and the sexual intimidation is on a daily basis in the classroom, it goes unchecked,” a mother told KGW 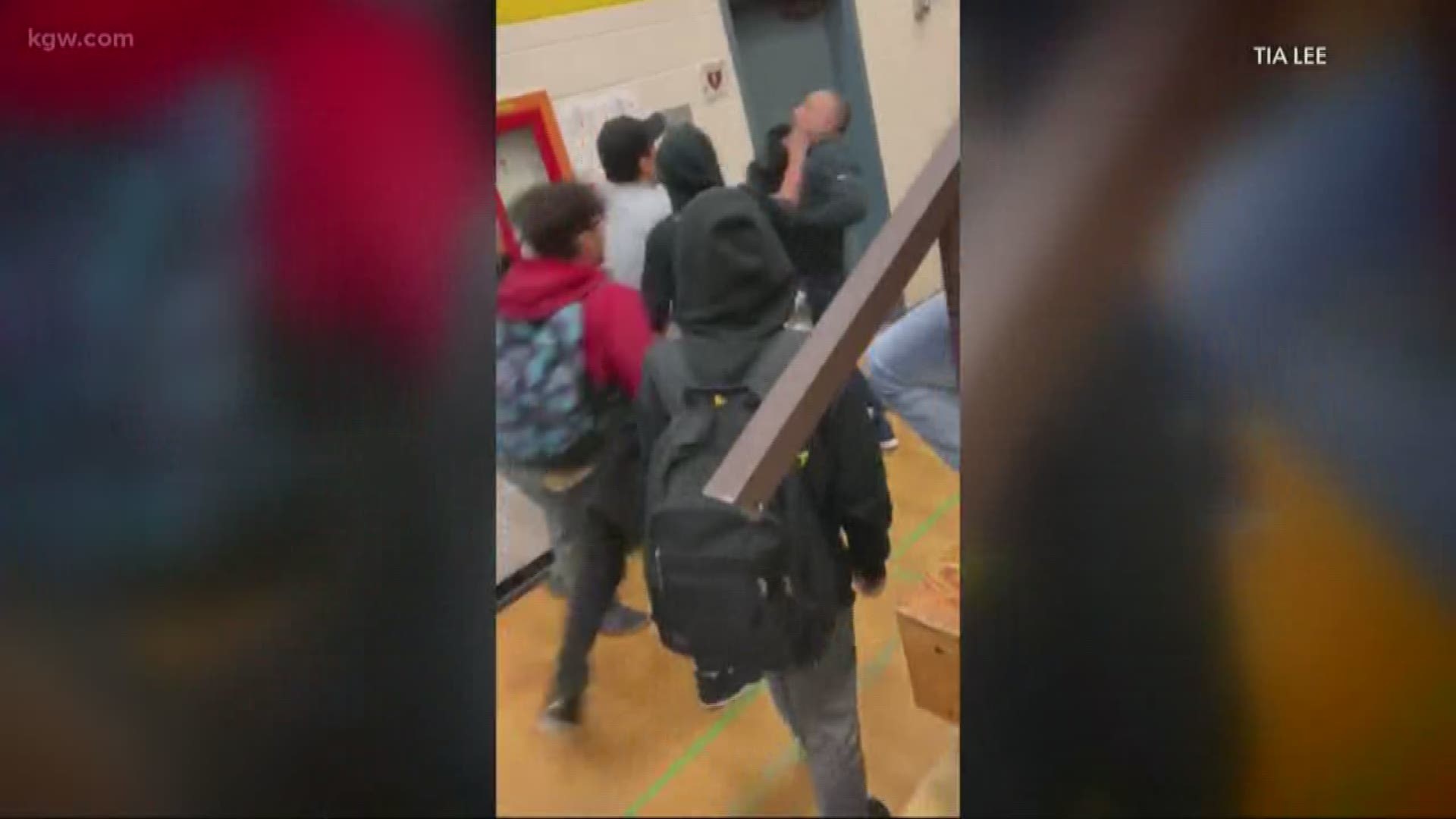 VANCOUVER, Wash. — Some parents plan keep their children at home Monday and instead show up at Gaiser Middle School to speak with staff because of the fight that broke out Friday.

One mom said what happened is the symptom of a bigger issue she continues to see in her daughter's classroom.

Cell phone videos show the chaos that began inside the gym at Gaiser Middle School Friday during a basketball tournament. Eighth grader Tia Lee does not go to Gaiser, but was there to watch a game. She spoke to KGW with her dad's permission and shared videos she took of what happened.

“It was just nerve wracking and overwhelming for me personally, but with other kids, it was just crazy,” Lee explained.

The Clark County Sheriff’s Office said a child was causing problems at the game and school officials were attacked as they tried to remove the them from the gym. There are conflicting stories of why the child was removed, but Lee said that is why she and many others went outside."

A bunch of kids just wanted to know what was going to happen to him specifically, and then everything after that was just chaos,” Lee said.

Deputies responded and said they were surrounded by 60 to 70 students who were cursing and yelling racial slurs and death threats, among other things. At one point more than 30 officers were at the school.

Nine students were arrested on various charges including trespass, assault, and disorderly conduct. Deputies described the situation as a riot.

Terri Brashear's daughter is an eighth grader at Gaiser. She said disruptive and threatening behavior is an ongoing problem in classrooms.

“It's overwhelming, but we're not surprised,” Brashear explained. “We've seen it coming. It's been boiling up to a head. We've been asking for some intervention from the administrative offices and it hasn't been happening.”

Brashear said she has had multiple meetings with administrators about the issue.

“The racial slurs and the sexual intimidation is on a daily basis in the classroom, it goes unchecked,” Brashear said.

When KGW asked Lee if this is something she sees happen at her middle school, Lee said, “Kids are disruptive and some kids, like, will threaten teachers, but they don’t necessarily like threaten their lives or anything like that or threaten to shoot up the school. Really, I honestly just feel like that’s a kid thing to do, especially if it’s the kids who try to stand out, or just really known for doing that, or don’t even want to be there, but other than that, that’s just like a normal thing. I feel like at all schools for some kids, cause it doesn’t happen all the time, but it does happen.”

Brashear though hopes this riot will be a wakeup call that behaviors need to change.

“Something has to be done now or we're going to be added to a list we don't want to be added to,” Brashear explained. “This is going to be a catastrophe and nobody's hurt right now, but if these students, eighth grade students, will face off with an armed sheriff, exactly what does my 14-year-old have a chance in class while she's being threatened?”

The Vancouver School District sent KGW a statement Friday describing what happened, but has not said much else.

Brashear said she has not received anything from the school about it, which is why she plans to be at Gaiser Monday, instead of her daughter.

KGW reached out to the school district Sunday evening, but there has not yet been a response. There is no mention of the incident on the district and school websites and the district's social media accounts.