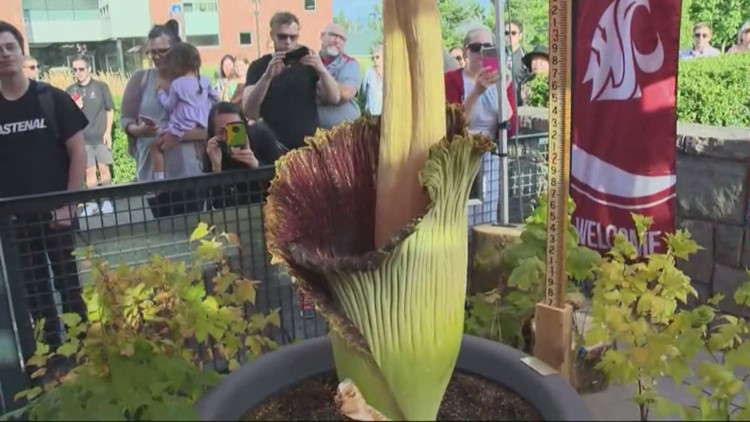 VANCOUVER, Wash. — The corpse flower that has attracted thousands of people the Washington State University campus in Vancouver has now been in bloom for almost two days

The bloom only lasts for 24 to 48 hours which makes Wednesday the last time people will be able to experience it.

When the flower first bloomed on Tuesday, campus officials told KGW there was a huge line to see the corpse flower. Some people waited an hour and a half to see the rare phenomenon.

On Wednesday, there was much less of a wait.

“It's huge! I mean, it's super big. It's really interesting,” one person said.

For 9-year-old Sophia and her sister, the experience was awesome.

“You get to see it up close, actually on the campus makes it so cool,” Sophia said. “The fact that you actually get to see it in real life and it's only for like 48 hours.”

The corpse flower is one of the world's rarest and largest flowering plants. It's taken 17 years for this to bloom and in another four years, it'll bloom again. The rare sight and stench associated with the event only last for 24-48 hours. The end of its bloom is expected around 8 p.m. on Wednesday.

The smell had died down a little on Wednesday. Still, the sisters got a whiff.

At its worst, the smell has been likened to rotting meat, dirty socks or garbage.

“Not nearly as dramatic as it was the first night,” said professor Steve Sylvester, the plant’s caretaker.

He said there are actually another a handful of plants -- all operating on different timetables -- in the same pot as this corpse flower.. He is expecting that within months he could get another bloom.

Anyone still wanting to experience this bloom has until 9 p.m. on Wednesday.