Football but not commencement? UW seniors push for in-person graduation

The push is on for smaller, departmental in-person commencement ceremonies as an option. 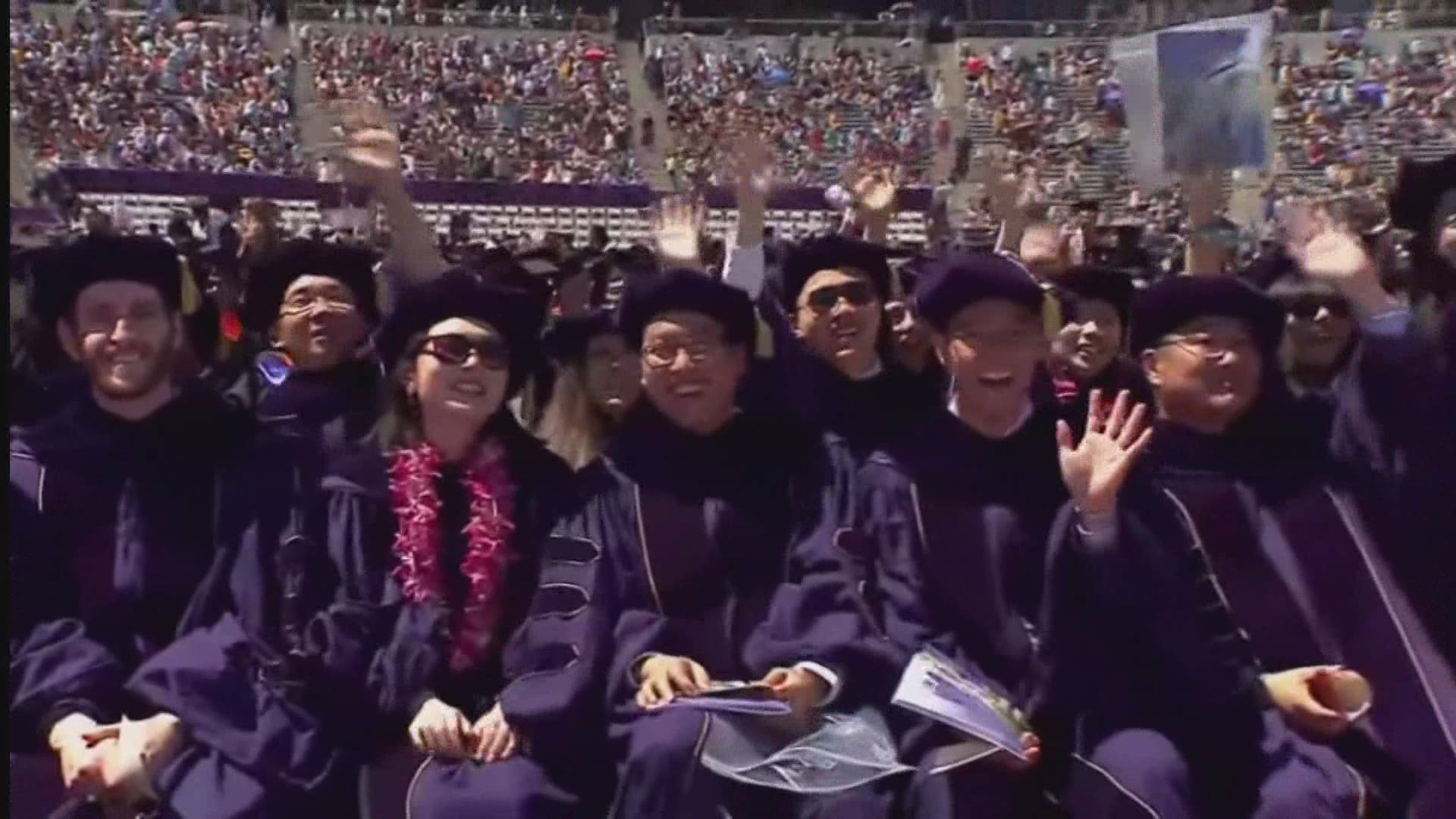 SEATTLE — Some graduating seniors at the University of Washington are pushing for smaller scale, in-person departmental commencement ceremonies as an option for the graduating class of 2021.

UW President Ana Mari Cauce announced on April 1 that this year's spring commencement ceremonies will be held virtually, as they were for 2020.

But Vivian Ha, a graduating senior and biology major, said another event held at Husky Stadium made her wonder why there cannot be other commencement options.

"We're getting through a pandemic. We just really wanted something that could celebrate all of our accomplishments," Ha said.

That other event was the UW Spring Game at Husky Stadium on May 1, an event that drew about 9,000 spectators. A commencement at the stadium by comparison, could draw up to 40,000 to 50,000 graduates, their families and friends.

Ha pointed out her concerns in a Facebook post that wondered why spectators were allowed at football games, but graduation ceremonies would not be held in-person.

"I feel like at the end of the day, how we all feel is we aren't being as valued equally as UW football players and I feel that imbalance makes us feel a little hurt," said UW graduating senior Lisa Marie Dias.

In a Facebook exchange, UW President Ana Mari Cauce replied to Ha, saying an in-person ceremony at Husky Stadium would make social distancing for students difficult, as thousands of students would need to sit shoulder-to-shoulder on the field.

"The bigger issue isn't in the stands, it's on the field. During spring football at any given point there are no more than 50 players on the field," Cauce wrote.

Cauce also posted that while it would have been possible for some departments to hold in-person ceremonies, not all could. It was decided after extensive discussions with faculty and staff that it was "best to have them all virtual."

A university spokesperson said there is limited time to make a such a big change.

"It takes months of planning to pull off our Commencement ceremony, whether in person or online, and we waited as long as we could to make a decision based on the best public health guidance and guidelines at the time. We want the experience to be both thoughtful and memorable, and the remaining time on the calendar simply does not allow for this to happen," UW spokesperson Victor Balta said via email.

Balta also said the football game allowed for a significantly smaller number of spectators than what a commencement ceremony at the stadium would draw.

"Commencement generally draws more than 40,000 attendees for just one class, and we did not want to impose any significant or complete restriction on the number of family and friends who could attend and share this special moment with graduates," Balta said.

UW students started a petition to push for departmental commencement ceremonies as an option.

"King County having 70 percent of the population with at least one dose of the vaccine, I think expecting a smaller celebration for departments and smaller majors individually, I think that would have been possible," Ha said.