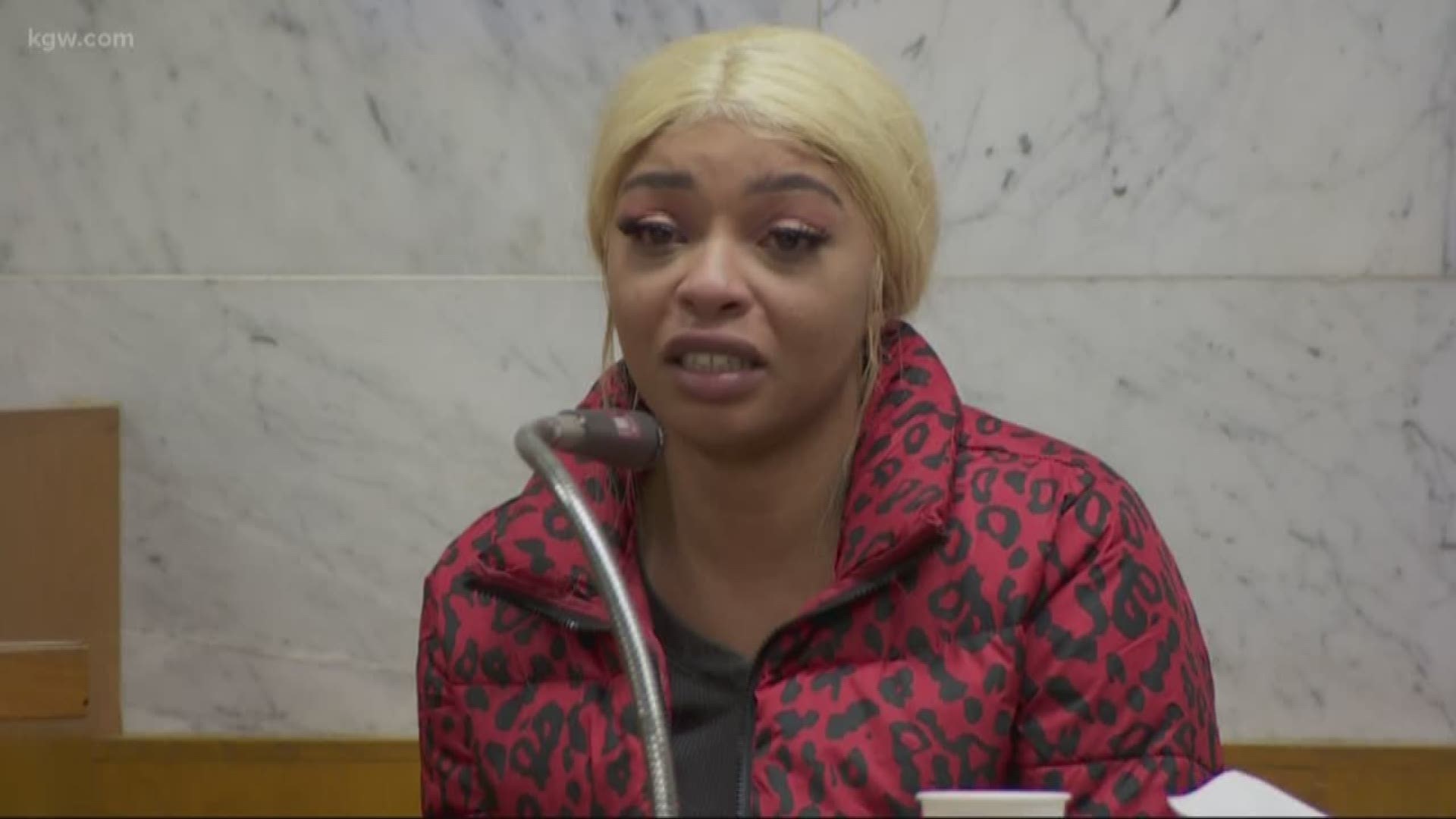 The second day of Jeremy Christian's trial got underway Wednesday morning with testimony from several witnesses of the attack, including Shawn Forde.

Forde, a star witness in the trial and a 19-year veteran of the Marine Corps, testified he tried to de-escalate the situation on the train on May 26, 2017, by taking Christian’s attention away from two black teenage girls who felt threatened by his rant.

Christian is accused of stabbing three men who intervened or stood nearby during the altercation. Two of the men, Ricky Best and Taliesin Namkai-Meche, died. The third, Micah Fletcher, was gravely wounded but survived.

The defense and state submitted their opening arguments Tuesday. Christian's lawyers argued their client used self-defense in the attack, because he felt like he was being assaulted by Fletcher.

Tuesday, the state began their argument by calling three young black girls to testify who were on the train that day, including Walio Mohamed, who was wearing a hijab at the time of the attack.

Forde said he then moved himself in an effort to “shield” the teens from Christian.

“They looked really young. I’m a dad, they look young enough, you could tell by their reaction they were out of sorts. they were really scared. I wanted him to focus on me. I didn’t want him to focus on them and continue threatening them … he talked about Vikings, which is white supremacy rhetoric in case y’all don’t know,” Forde said.

Forde said it looked like Christian was just “amping himself up” at that point to do something, so he pushed a red “help” button at least 20 times or so.

“I remember briefly turning to the girls and mouthing to them, ‘Are you OK?’ One said, ‘Yes, thank you,’” Forde explained.

Forde said when he saw Fletcher get upset at what was happening, he told him, “[Christian’s] just talking, it’s cool, it's cool."

The day had started with the testimony of Marcus Knipe, an Army veteran who was on the platform of the Hollywood Transit Center that day on the way to the Rose Festival with his family. He saw Fletcher stumble out of the train and was able to apply pressure and a tourniquet to Fletcher's stab wound while they waited for first responders.

"[He] came stumbling from the train in front of me," Knipe said. "Him and I locked eyes ... I helped him to the ground and put my hand on his neck for pressure to try to stop the bleeding as much as I could."

Knipe helped prop Fletcher up against a pole on the platform and Fletcher asked him to call his mom. Knipe said Fletcher didn't want his mom to worry about how bad his wound was.

The first thing Micah said to his mom, before medics even arrived was, "Tell my job I'm not gonna be in [that day]."

Morgan Noonan, a U.S. Army veteran with combat experience, took the stand next. He said he recognized Best because they commuted around the same time on the MAX often.

He said Christian's rant was offensive and included "things you'd say if you wanted to provoke a response … they were things you don't say if you're trying to be productive. It brought the hairs on my neck up … he was opening up a can of worms."

Said Noonan: "I think he was baiting to look for a fight so he could fight back."

After the stabbings occurred, Noonan said he jumped into action to help Best and Namkai-Meche because he was a medic in the Army.

"Ricky couldn't be saved, I can't… there’s a breathing pattern when someone goes into when their body is falling apart," Noon said.

Noonan then attempted to help Namkai-Meche, who he noticed had a defensive wound on his hands.

"There was just no way to stop the bleeding," Noonan said.

Next, two sisters-in-law, Amy Farrara and Jessica Khron, took the stand. They were both on the train during the stabbing and had brief video evidence before, during and after the stabbing occurred.

The women said they sank down in their seats at one point during the attack because they thought someone was going to shoot.

Detective Jason Young of the Gresham Police Department testified next. He was assigned to the Transit Police division on the day of the attack, and had responded to the stabbing at Hollywood Transit Center.

Young said several people were already helping Namkai-Meche when he got there, but he cut the man's shirt and backpack straps to check for more stab wounds.

At one point, Young said he took Namkai-Meche’s wallet out.

"I called him by name, I told him, 'We’re trying to help you.' He couldn’t respond," Young said.

Ana Luisa Rivera, originally from Mexico, but now living in Portland, was on the train that day by herself. On the witness stand Wednesday, Rivera said Christian’s rant left her feeling intimidated and frightened. Rivera took several videos of the stabbing, including the traumatic aftermath, during which a person nearby could be heard praying in Spanish.

RELATED: Who is Jeremy Christian?

The next witness, Amee Pacheco, was sitting next to Christian for much of his ride on the MAX before things escalated. She said mostly everyone on the train seemed to be offended by his rant, and said a lot of people were yelling at him to “shut up.”

Pacheco said much of the actual stabbing is a blur because she was so close to it, and at one point, the prosecution showed a still image of her touching Christian’s arm after the stabbing.

“It was an extremely traumatic experience and there’s a lot that was fuzzy for me,” she said, when asked about Christian’s rant being directed at a specific person.

She was also a witness for the defense, and was asked by Christian’s lawyers if she saw Mohamed and Mangum on the train in the first place.

Pacheco said her first time hearing about the girls was in the media, after the stabbing took place. She thought Christian’s rant may have been directed at Shawn Forde. 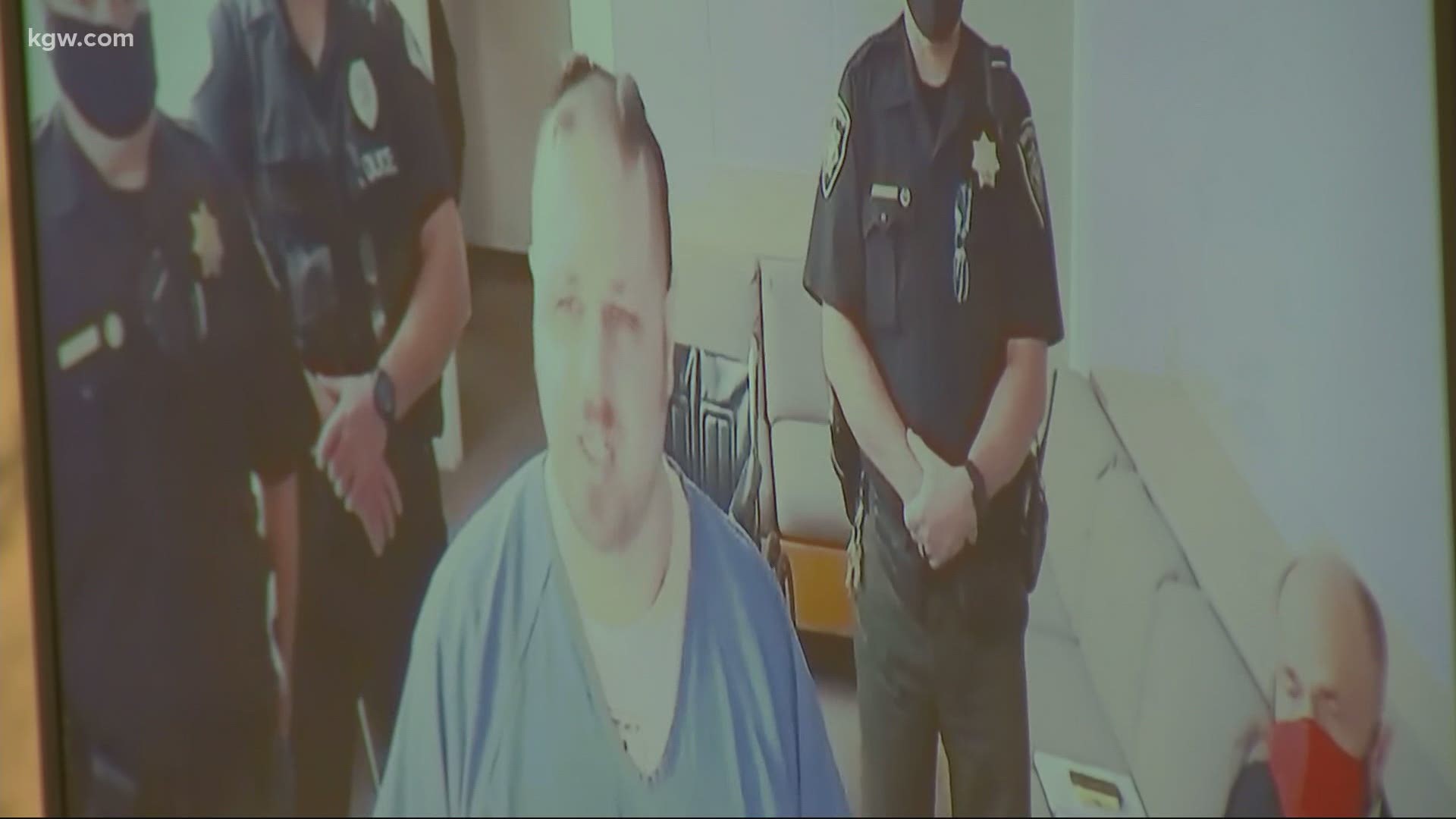