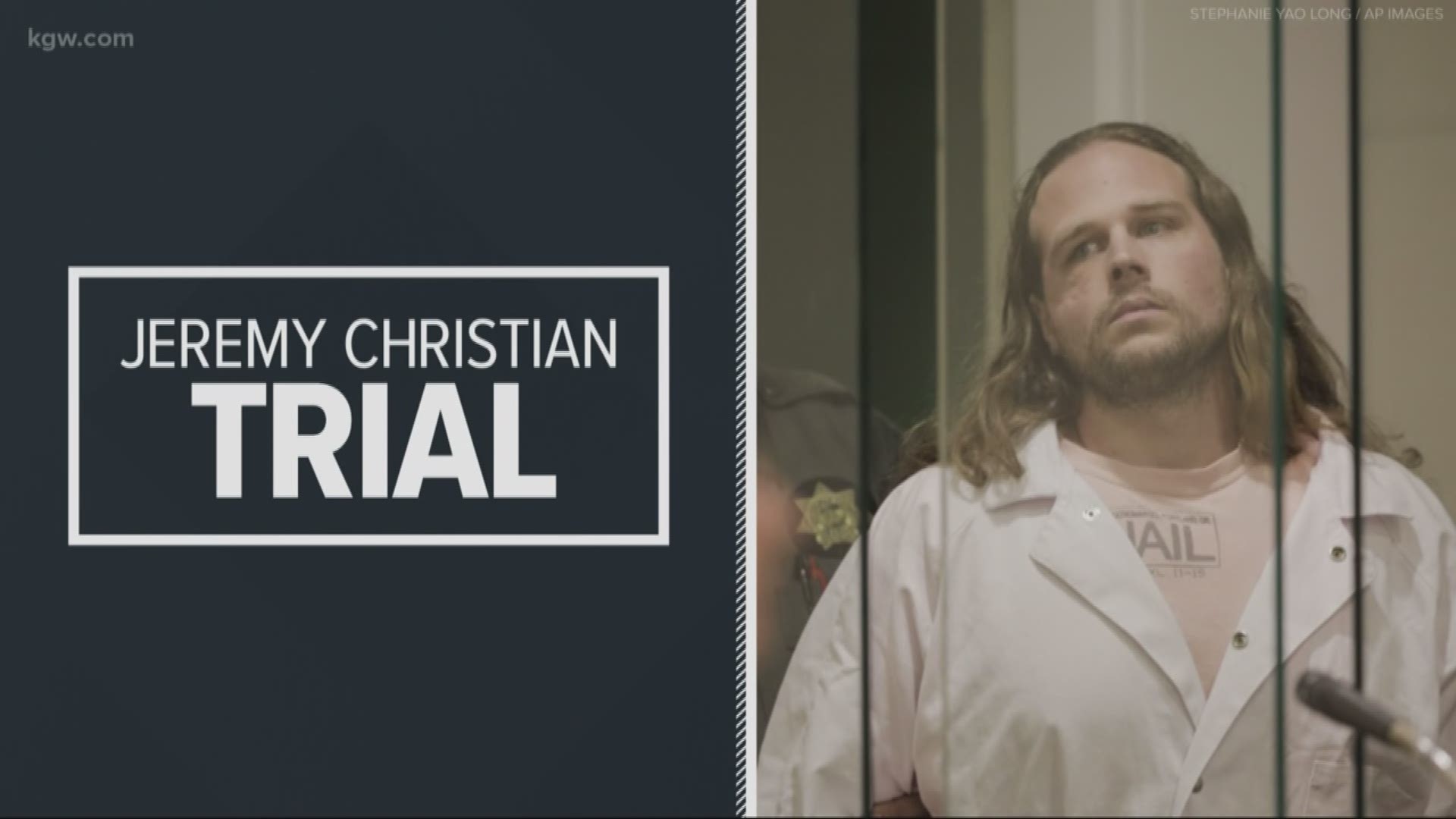 PORTLAND, Ore. — The defense team for Jeremy Christian, the man accused of stabbing three men aboard a MAX train, continued its case Tuesday by bringing in a forensic psychologist who testified he diagnosed Christian with autism spectrum disorder.

However, that same expert said ASD "cannot fully account for or explain his behavior on the MAX train."

She said she met Christian on three separate occasions, two of which happened on the same day.

"Jeremy has executive functioning dysfunction. His frontal lobes and how his brain works to make decisions to function in the world, to assess surroundings is not where we’d expect it to be," Dr. Andrews said.

She said Christian's intellect levels overall were normal, but said there are areas he struggles more than most people.

Dr. Andrews also testified it does not appear as though Christian's mother had used drugs or alcohol while being pregnant with Christian. She said Christian has an IQ of 98, which is classified as average.

In a cross-examination, prosecutor Jeff Howes drilled down on cognitive test scores Dr. Andrews gave to Christian during her examinations.

His scores for most tests Dr. Andrews gave him fell into an "average" scale, aside from a handful of tests where he scored a low-average or below average, compared to his peers.

Dr. Andrews was told by the judge not to answer the question. Dr. Andrews added Christian tends to fixate on what he thinks is the correct response, and even when he got feedback he didn’t seem to be able to correct it.

In tracing back Christian's life, Dr. Andrews said elementary school records for Christian have been destroyed, and he only made it to ninth grade before he dropped out of school, despite having good grades.

However, he got his GED and went to community college -- a fact Howes said shows Christian's ability to function in the outside world. Christian also spent 4 years working at a Portland pizza shop.

"He bulldozes you with stuff," Dr. Derning said.

Referencing the time Christian spent in prison after a robbery, Dr. Derning called him a "damaged person."

This was followed by prosecutor Don Rees' cross-examination. Rees read through claims in Dr. Derning's report on Christian.

"You write, 'autism spectrum disorder cannot fully account for or explain [Christian's] behavior on the MAX train … [there are] other factors at play, including drinking alcohol or perhaps any other drugs, or being in prison, or possibly having a PTSD flash back,'" Rees said.

Dr. Derning confirmed that report, and added he did not diagnose Christian with PTSD, bipolar disorder or schizophrenia.

Both doctors admitted they had trouble getting background on Christian. Two of his three brothers refused to be interviewed, and Christian's elementary school records have been destroyed.

The state had already presented evidence and witnesses for seven days over the previous two weeks, and will have a chance to respond once the defense wraps up its case.

KGW is told closing arguments could happen as soon as next Tuesday.