'I pushed him...he responded by stabbing me in the throat': Jeremy Christian trial, Day 6

Fletcher was questioned about his response to Christian's rant aboard the MAX on May 26, 2017. 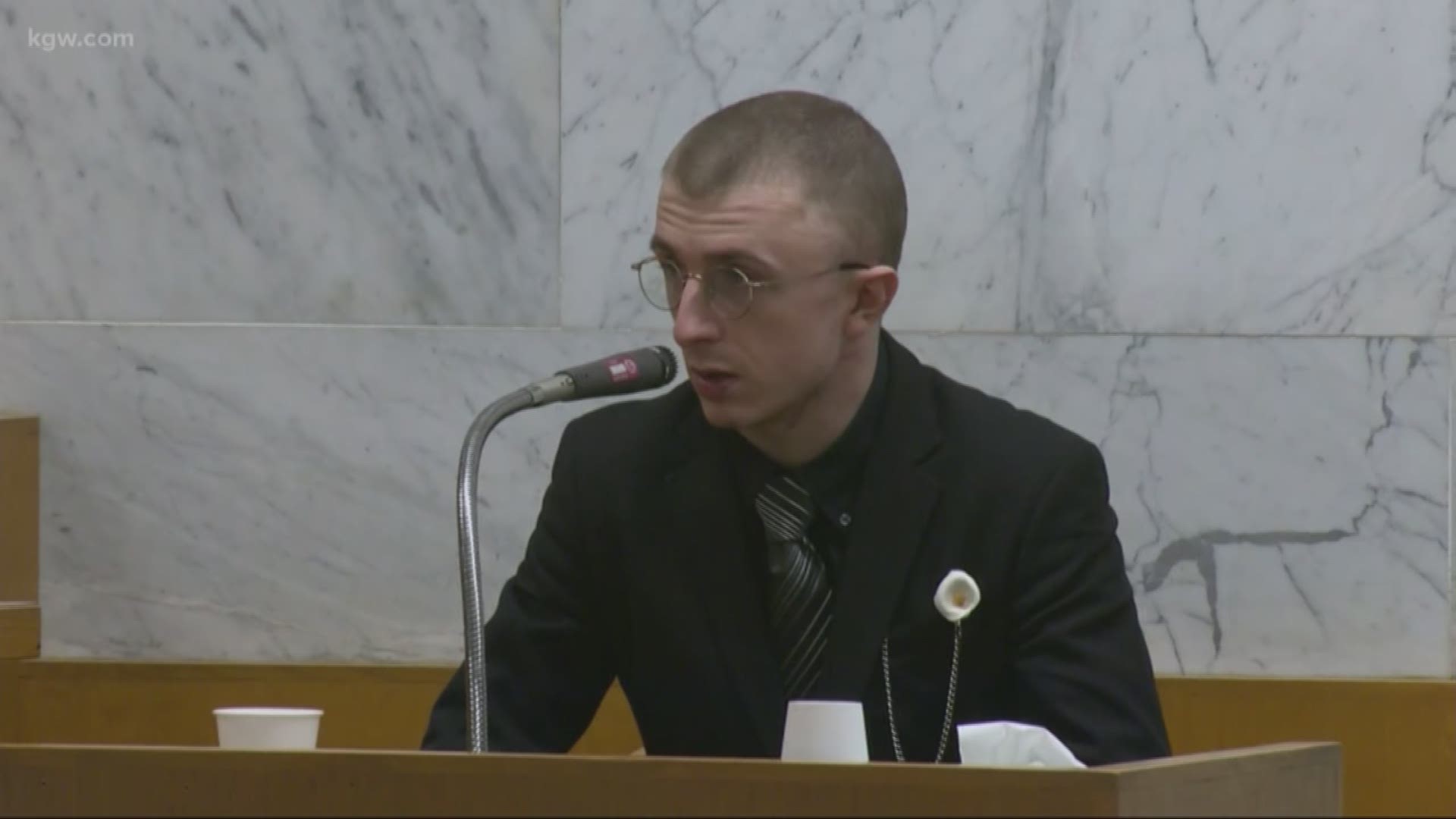 The sixth day of Jeremy Christian's trial got underway Tuesday with testimony from Micah Fletcher, the man who survived the MAX stabbing.

Christian is accused of going on a hateful rant aimed at two black teen girls aboard a TriMet MAX train on May 26, 2017. An altercation followed between Christian and two other men, Fletcher and Taliesin Namkai-Meche, and quickly escalated as the three men were chest-to-chest.

Fletcher shoved Christian twice, and Christian told him, "Hit me again, hit me again." Prosecutors say Christian then took a 4-inch knife from the pocket ofhis shorts and stabbed Fletcher, Namkai-Meche and another passenger, Ricky Best.

The defense and state submitted their opening arguments last week. Christian's lawyers argued their client used self-defense in the attack, because he felt like he was being assaulted by Fletcher.

“I have to focus on person’s face and listen hard to realize whether I’m saying something that’s upsetting, strange, or good or kind, because otherwise I end up making people upset or in some way confused without meaning to,” he said. “I grew up in a lower income neighborhood with certain social rules. When you break those rules, they act with assault, bullying, verbal abuse.”

Then he explained that he had attended two political rallies in April 2017. The first was a counter-protest in Vancouver, Washington, where he was arrested for throwing a smoke bomb. Those charges were eventually dismissed. He testified that he later attended a free speech rally in Montavilla, the neighborhood where he grew up. There, he said, he remembered seeing Christian.

“He was yelling about Norway,” Fletcher said. “Then he started what I would call ’sieg heil-ing,’ but he called it a ‘viking salute.’”

Next, Fletcher described what happened the day of the stabbing. He was on the train on his way to work in Southeast Portland when he heard Christian’s rant through his headphones. He said it appeared as though Christian was yelling at two young black girls, one of whom was wearing a hijab.

“I moved down from the elevated section of the train, screaming for him to, ‘Shut the f*** up’ and he can’t yell at kids like that, ‘That’s f***** up, you can’t do that,’” Fletcher testified.

At this point, Fletcher realized who Christian was, and that he had crossed paths with him a few weeks prior at the Montavilla rally.

Christian continued yelling, and told Fletcher, “Get me off [the train] then!”

Fletcher testified he then heard a loud sound [we now know this was the sound of Christian slapping Namkai-Meche’s phone out of his hands], saw Christian nose-to-nose with Namkai-Meche, and thought Namkai-Meche would need help defending himself.

“I remember going between them and trying to say something, but I was pushed down,” Fletcher said. “I stepped forward to the same spot. I thought Christian was going to grab Taliesin and hit him in the face or push him. I grabbed Christian’s collar and shoulder of his shirt and moved him away … I was saying, ‘Get the f*** off the train. Go on and get.’”

Fletcher said he shoved Christian two more times, and then Christian stabbed him.

“Originally, I thought he punched me … I was getting up to guard my face and noticed blood on hands and a lot of blood on my shirt, then I realized it was coming from my neck,” Fletcher said, adding he couldn’t remember much else from that moment on. “This wasn’t about me feeding ego and protecting myself. I wanted to protect Taliesin.

“I was wrong. I didn’t save him. I really wanted to. I couldn’t. I just wasn’t strong enough," Fletcher later testified.

He said he crouched down and got himself off the train, while holding his bleeding neck. A witness, Marcus Knipe, carried Fletcher and leaned him against a pole on the platform, while applying pressure to his neck.

Fletcher said he asked Knipe to call his mom. Knipe handed the phone to Fletcher, who told her he had been stabbed in the arm, in an effort to keep her calm.

“I told her I loved her and that I’d see her soon. I told her to tell my work I won’t be making it in today,” Fletcher said. “I didn’t want her to know how hurt I was.”

He spent the next four days in the hospital, and the wound still impacts his health.

“I have limited mobility in my neck … and a nerve problem. My jugular vein was severed beyond repair and had to be closed on the left side of my body,” Fletcher said, adding the stabbing also chipped off a portion of his jaw bone.

Christian’s lawyer, Dean Smith, questioned Fletcher regarding his behaviors at the Vancouver counter-protest in April 2017. The defense displayed photos of Fletcher at that rally, where he was dressed in all black, with a black skull mask over his face. He said he was marching behind someone holding up a "Rose City Antifa" flag, and he admitted to tossing smoke bombs into a crowd.

Smith also questioned Fletcher regarding his actions on the MAX the day of the stabbing. He asked Fletcher if he thought his response to Christian’s rants was appropriate, and went on to tell Fletcher that according to video, the two teen girls had got up and left after Fletcher approached Christian.

“When you stepped forward the girls were still seated to your right. As soon as you passed them, they got up and left. Were you aware of that?” Smith asked Fletcher.

“So your purpose was to help the girls but you didn’t notice they left?” Smith asked.

Medical Examiner: "It's virtually impossible for a trauma surgeon to suture that."

Gunson conducted autopsies on Best and Namkai-Meche the day after the stabbings.

Namkai-Meche was stabbed four times, and a stab wound to his left neck is what caused his death.

The 1-inch stab wound hit his carotid artery, the artery that carries blood from the heart to the brain, which caused Namkai-Meche to bleed profusely.

"You would become unconscious rather quickly. They would maybe keep standing a little bit, but eventually collapse," Gunson said, describing effects of this kind of injury.

Despite showing other autopsy photos, the state chose not to show a photo of this stabbing injury.

Gunson said this wound would be fatal in any circumstance.

"It's virtually impossible for a trauma surgeon to suture that," Gunson said.

Namkai-Meche suffered two more stab wounds in the neck and head area, as well as a defensive stab wound to his hand.

RELATED: Jeremy Christian trial, Day 4: 'He was saying he was a Nazi and asked if anyone wanted to join'