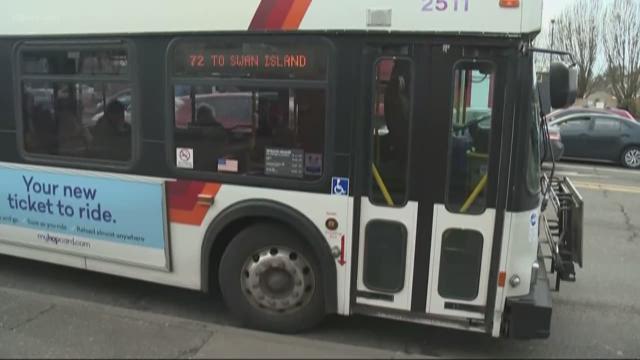 PORTLAND, Ore. -- After last May's deadly stabbings on a MAX train, many TriMet riders started calling for more security. Now, Portland city commissioners authorized $17,500 in grant money to fund a grassroots idea to do something about it. And it doesn't involve police.

Portland nonprofit OPAL, which stands for "Organizing People, Activating Leaders", has done lots of surveys since those stabbings and found that some riders don't want to see more police on the trains or buses. Some say it makes them feel uneasy.

"A lot of people don't feel safe when police officers with guns or dogs sniffing come around," said Orlando Lopez Bautista with OPAL. "You can feel tension change immediately when they step on board of MAX or a bus, people get tense or afraid even though they may have a bus pass."

He says particularly minorities or disadvantaged people, a majority of TriMet riders, feel this way.

Lopez Bautista says instead, many riders said they'd like to bring back a position TriMet used to have called a "rider advocate" - a regular person, identified by a vest or button of some sort, who was more of a customer-service type, rather than a cop. That person also watched and stepped in when they saw trouble. TriMet stopped paying for those positions during the recession.

"While we no longer have the 'rider advocate' position, we do employ seven customer service field outreach & community relations representatives who are out on the system daily helping our customers," said TriMet spokeswoman Tia York. "They receive safety-based trainings and maintain direct, continuous communication with our Operations Command Center. We also have a 16-person customer care team available to our riders by phone, email and Twitter. Also, we have field supervisors who provide direction and assistance to riders while they are on the system conducting code enforcement and facilitating service during major events or disruptions."

OPAL outlined an idea all on their own, and now is using this grant money to bring a version of the rider advocate program back but on a volunteer, unpaid basis at first. Only the volunteer's daily bus pass would be compensated. They would also get professional training in how to talk people down from ranting and raving, de-escalate arguments and be a friendly, consistent face when you stepped onto a train or bus each day.

The problem is, that's what three good Samaritans did just before they were stabbed last May at the Hollywood Transit station in Northeast Portland. They tried to calmly talk suspect Jeremy Christian down, who was said to be in a racist rant against some girls. Two of those men died.

OPAL says the volunteers would not be armed, and if a weapon is seen or involved, they would alert the driver and call police.

"We don't want to put people in harm's way, but what people mostly see more than anything is verbal arguments," said Lopez Bautista. "So we want individuals trained in de-escalation to resolve those arguments before they escalate further."

He says OPAL's insurance and the grant agreement would cover a volunteer if they were injured while working in that capacity.

Louetta Peterson, an African-American woman, rides the MAX regularly. She says she generally feels safe, but doesn't think a community volunteer would be very effective. "If I'm in a confrontation and somebody came up, the first thing I would say is 'Back up', even if we're just arguing and I'm just mad at that person, it's not going into anything physical. So I really don't need some person that I don't know. But if I see police? Okay I'll be quiet before you shoot me on accident five times," Peterson said.

Bob Tomanelli, a white man riding to the airport Tuesday afternoon, likes the idea of the community volunteers. "I think it's a good idea. To be clearly identifiable in some fashion other than sort of a police uniform and they're trained to basically de-escalate. It's less threatening, much less threatening," he said.

Davion Hudson, an African-American man who just moved to Portland three months ago from Los Angeles, was shocked to hear about last year's deadly stabbings. He thinks riders would be safer with armed, plain-clothed police officers who could take on a threat versus a community member.

"If there's not actual police officers on there, then you need to have an undercover cop on there with a weapon as well so everybody will feel safe," he said.

The program is not sanctioned by TriMet, but because each volunteer would have a bus pass, and it's a public transit system, they are allowed to be on board as eyes and ears talking with people. The bus drivers union is all for it. The program will start on bus and MAX lines on Portland's east side, where OPAL says the need to help marginalized folks is greatest. If it works, the nonprofit hopes TriMet would finance it with full time jobs again.

TriMet sent us this statement:

TriMet is currently moving to increase our code enforcement and security presence on the system with a new type of personnel. Currently we are referring to those personnel as transit peace officers. Within three years, we plan to bring in up to 60 of these personnel through a contract with Portland Patrol Inc. (http://news.trimet.org/2018/01/trimet-enters-into-partnership-with-portland-patrol-inc-to-increase-security-and-code-enforcement/). These officers will not carry guns. We've heard from riders that they would like more presence but more enforcement for fare evaders and those who are disruptive on the system as well as violate other sections of the TriMet Code. These officers will address that. We also have contracted security officers who provide a presence and serve as "eyes and ears" on the system. We will be increasing their numbers as well.