The city is paying for dozens of new tiny homes to replace tents in three emergency outdoor shelters that opened last spring. 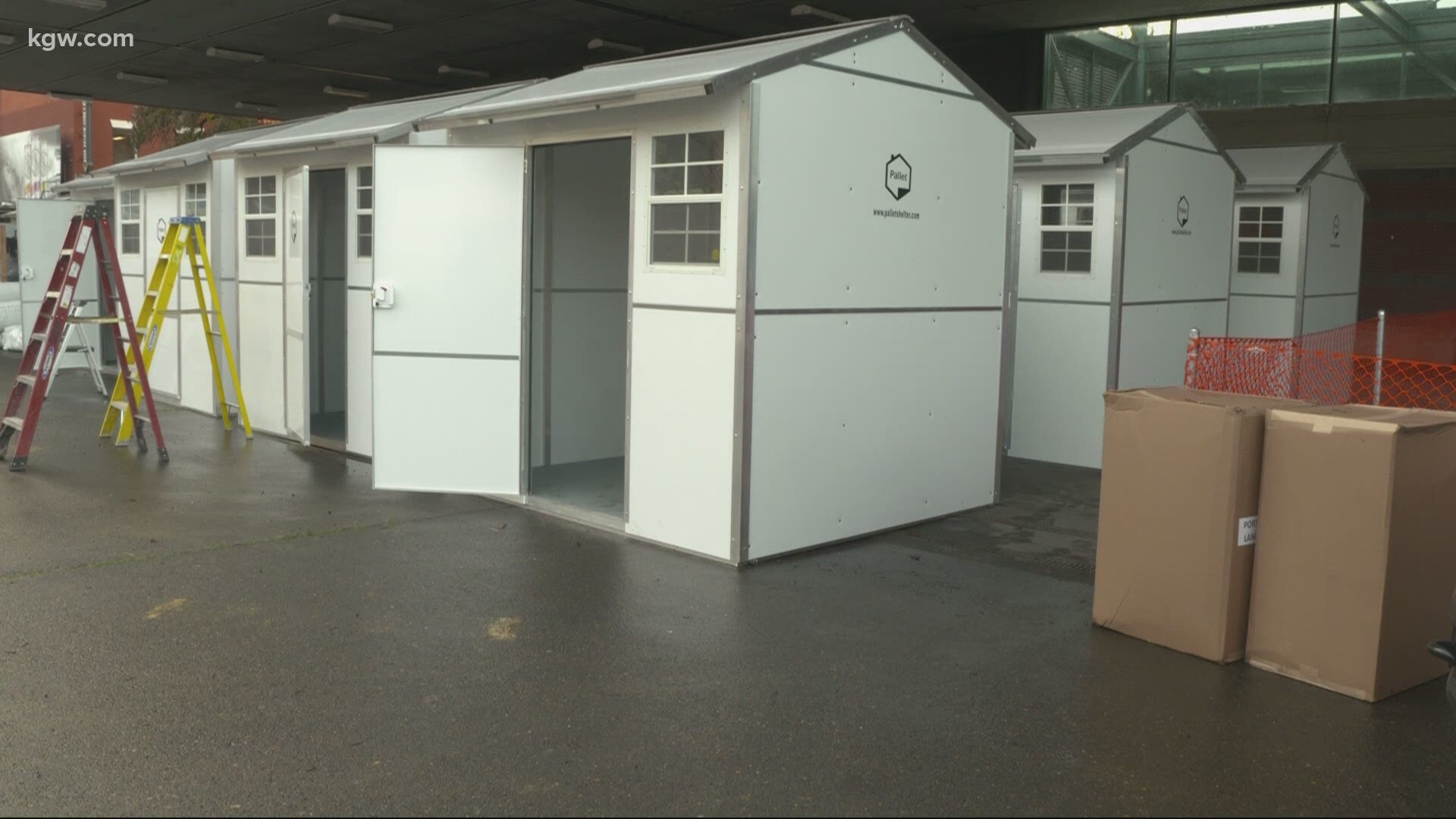 PORTLAND, Oregon — As winter nears, many facing homelessness in Portland will soon get access to new, temporary housing in the form of tiny homes. Crews began construction on the first pod in Old Town on Monday, where Brian Hall will live.

“You could look at someone on the street and think that they're not trying,” said Hall. “But you don't understand that they might have just recently lost a job or recently couldn't afford their place anymore.”

Hall's story starts in Las Vegas. There he worked in a casino but lost that job due to the pandemic. Hall came to Oregon for work, which didn't pan out.

“I was staying in a hotel room, couldn't afford it anymore and ended up on the street,” he said.

While living in a tent, Hall, like so many others, was cold, damp and worried. Not just about catching COVID-19 and theft, but about how he'd get out of the cycle of homelessness and back indoors.

"Knowing you can sleep with peace of mind, there are no words I can use to describe it,” said Hall. “You can actually sleep and focus on your day tomorrow and get your things done that you need to do to help you get off the street.”

Hall is hoping for all of that when he moves into one of 40 new, temporary, outdoor shelters going up near Northwest 5th Avenue and Glisan Street. They'll replace tents that have been set up in the outdoor emergency shelter that opened last spring. Construction on tiny homes within two other outdoor shelters, both on Southeast Water Avenue, is scheduled to begin in early December.

The shelters are operated by the city and county's Joint Office of Homeless Services. Each temporary home will provide between 64 and 100 square feet of space and bunk beds. They're equipped with heat, electricity, a locked door and will cost the city around $6,000 for each. The pod communities offer transitional support, meals, drinking water and bathroom facilities.

"Thank you to the Joint Office, Multnomah County and our nonprofit partners for working together to provide our most vulnerable neighbors with compassionate, warm, dry and safe spaces during the cold winter and spring months," said Portland Mayor Ted Wheeler, in a statement. "The structures being built at our emergency outdoor shelters will help our unhoused community members transition into a life of stability."

The shelters are manufactured by Pallet, an Everett-based company.

“This is meant to be something that anybody can get into,” said Pallet founder and CEO, Amy King. “We want people to be living in a better situation than they are, now.”

King said Pallet also employs people exiting the justice system, recovering from addiction and transitioning out of homelessness, themselves.

"We teach them construction trades, we also use them to produce these units and they were the ones to help us finalize this design from their lived experience,” said King. “They told us this was what would make a difference for them in lieu of living in tents or out on the streets.”

By next month, King said pallet will have deployed 1,500 beds across the country. Watching the pod in Old Town go up was extra meaningful for her.

“I grew up here in Portland,” said King. “When I drove into town today I was shocked by how many people are out on the streets in tents, but Seattle's the same, L.A.'s the same, we're seeing this in cities across the country.”

The hope is that these homes and communities will help transition residents into permanent housing. For Brian Hall, it makes him believe that this is not the end of his story.