Tiny home given to Gates family who lost home in wildfire

The custom-built tiny home will be complete in about six to seven weeks. It will be fully furnished and delivered to the Smith family’s property in Gates. 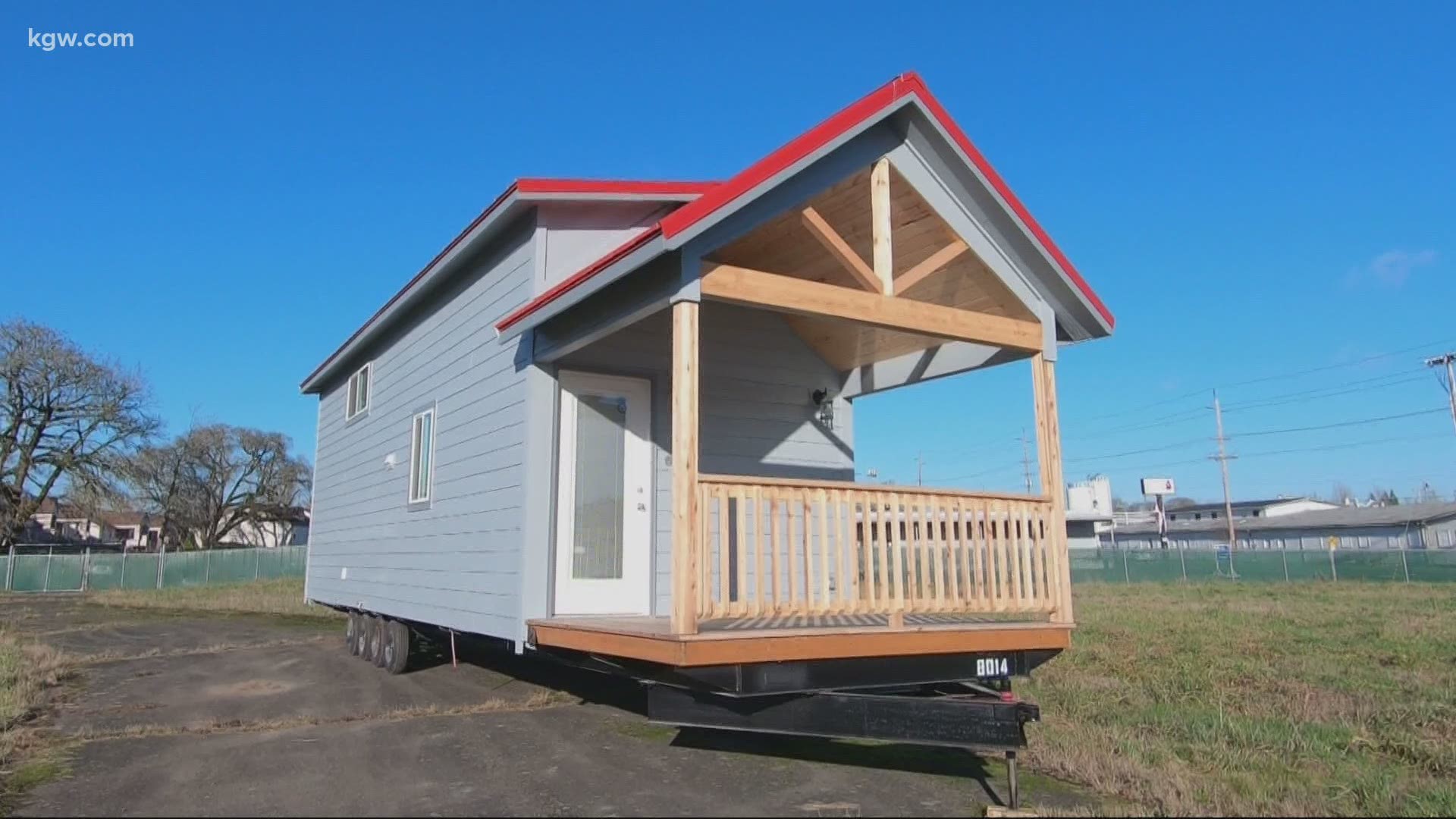 SALEM, Ore. — So many families lost their homes in the terrible wildfires that burned parts of Oregon back in early September.

But one family is getting a life-changing gift: a tiny home.

It’s been a little over four months since wildfire swept through the Santiam canyon. Tim Smith and his family remember it as if it happened yesterday.

“There was fire falling out of the sky. There was embers and branches, the wind was whipping and ripping things off the trees. It was just like a war zone when we left,” said Tim.

“It was hard to figure out what to grab and we got out of there as fast as we could,” said his wife, Sharon.

The family didn’t take a lot with them, partly because they thought they’d probably be coming back to a home that was still standing. But that wasn’t the case. Their home and belongings burned. Since then, they’ve bounced around by staying with family, friends and then they bought a fifth wheel trailer.

Last week, their power went out. So, they asked for help from the Service Integration Team headed up by Santiam Hospital. It’s a group that’s been helping people in the community. The team works with the Santiam Canyon Wildfire Relief Fund to find families who need help.

“Honestly we just went in to get a generator,” said Sharon.

What they got was a lot more.

“They called us and told us we were a really good fit for this tiny home program,” Sharon said.

Jordan Truitt said the Service Integration Team designated which family would receive the tiny home. Truitt helped organize the effort to give a tiny home to a family in need. International Housing Concepts is teaming up with Tiny Mountain Houses to design and build the tiny home for the Smith family. The United Way of the Mid-Willamette Valley is responsible for donating it to the family.

Truitt said the tiny home will also be fully furnished and delivered to the Smith family’s property in Gates.

The prospect of a brand new tiny home they get to customize is a bit overwhelming.

“They want us to go through and design and pick and it’s like, I’ve never had anything new. Everything we’ve owned has been second hand or used,” said Tim.

Their daughter, 8-year-old Rosie, was excited about getting a new home.

“I can’t wait to see how big it is or how small it is. I just want to see if it’s my style,” said Rosie.

Rosie got what she wanted. She, her little brother Ollie, and their parents got to spend the morning in Salem, touring the type of tiny home they’ll be getting.

Credit: Christine Pitawanich/KGW
Tiny home similar to what the Smith family will be getting

“That’s so cool, look at that,” exclaimed Sharon when she walked in and saw the loft.

“I’m in love with it,” yelled Rosie as she explored the loft area.

This tiny home is about 400 square feet not including the porch or loft. The Smith family will be getting one similar to it that they can customize to their liking.

“It’s going to be, I’m hoping, a new beginning for us. We went through a lot and I’m hoping to put all that behind us and move forward,” said Tim.

Credit: Christine Pitawanich/KGW
The Smith family from Gates will receive their custom-built tiny home in about 6-7 weeks

The Smiths said they hope their story inspires other families to reach out for help.

While they aren’t in their tiny home yet, they’re excited to try it out. They may not rebuild the home they lost. Instead, they are considering making the tiny home their permanent home.

“We have pondered the idea of being tiny home ambassadors and living it out,” said Tim.

“I think if anybody can make it work it’s us. We’re pretty used to the situation and this is going to be 100 times better than what we’re dealing with right now. “We’re pretty excited to do that and just kind of appreciate what we have honestly. Just having appliances that work, little things like that, is just going to be so exciting,” Sharon added.

Credit: Christine Pitawanich/KGW
Interior of tiny home similar to what the Smith family will receive

Truitt said It'll take about six to seven weeks for the family to get their new home.

In the meantime, he said International Housing Concepts is footing the bill to allow the family to stay at a hotel for free.

Truitt says this may be the first tiny home that’s going to a family who survived the wildfire, but he hopes more tiny homes will be given to other families who need one.