A carjacking suspect was shot and killed by Portland Police Bureau officers inside a homeless shelter in southeast Portland on Saturday night. 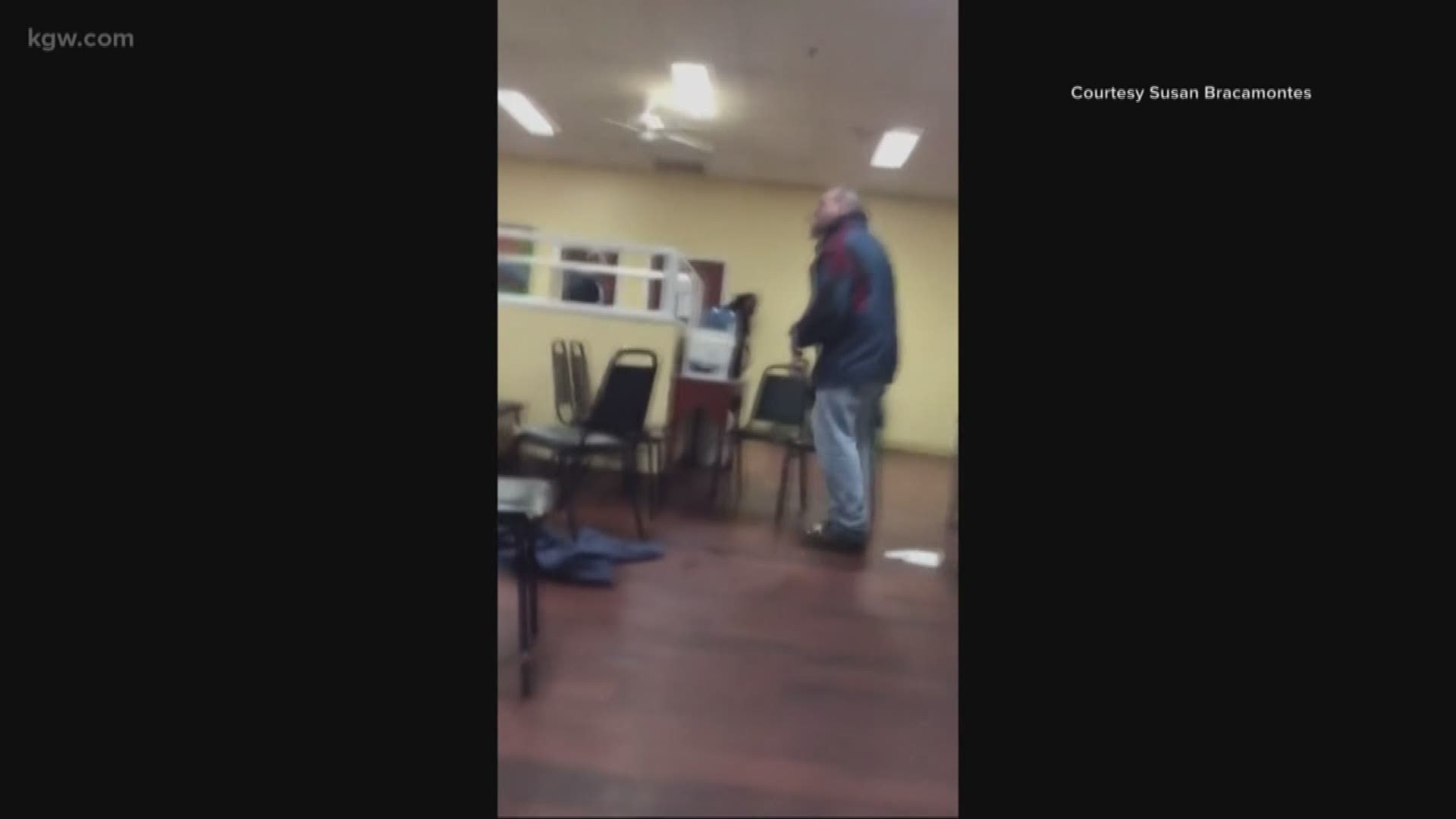 PORTLAND, Ore. — A carjacking suspect was shot and killed by Portland Police Bureau officers and a Multnomah County sheriff's deputy inside a homeless shelter in southeast Portland on Saturday night.

Portland police identified the suspect as 48-year-old John A. Elifritz.

Here’s a timeline of what has transpired in this case.

2:25 p.m. — Police say a man identifying himself as Elifritz calls 911 and reports his family has been murdered. Officers respond to the location the caller gave to the dispatcher, a construction site for a duplex. The contractor tells police a man was outside earlier and acting bizarrely. Officers don't find Elifritz but police confirm his family is safe. Other officers find Elifritz at Southeast 86th Avenue and Southeast Holgate Boulevard, where he backs away from officers and holds a knife to his throat, before running away. Police say officers decide to de-escalate the situation by not pursuing him, but file a referral for follow-up.

Between 2:25 and 4:35 p.m. — A community member approaches officers and tells them a man tried to carjack him while waving a knife.

4:37 p.m. — According to a police report, a 2003 silver Honda CRV is taken by force by a man at Southeast 72nd Avenue and Southeast Foster Road. The woman who files the reports tells officers she struggled with the suspect, Elifritz, who jumped in the passenger seat of the car and tried to take control of it. The woman's father, who was driving a different vehicle behind his daughter, exits his car and is able to get his daughter away from Elifritz. The suspect gets in the driver's seat and drives away in the car.

7:25 p.m. — A man calls 911 and tells the dispatcher he and his family encountered Elifritz around North Columbia Boulevard and North Chautauqua Boulevard. He says Elifritz was following him closely and at one point, pulled up next to him in the bike lane and pointed a black object at him, which he thought was a gun.

7:30 p.m. — Portland police respond to a report of a crash near Southeast Martin Luther King Jr. Boulevard and Stark Street. They find an unoccupied car abandoned on the nearby Portland Streetcar tracks. Officers begin looking for the suspect.

7:55 p.m. — Police receive a call saying a man is holding a knife to a person's throat in the 500 block of Southeast Grand Avenue.

8:00 p.m. — Officers find Elifritz inside Cityteam Ministries, a homeless shelter at 526 SE Grand Ave. Witnesses say the suspect entered the shelter, armed with a knife, and started stabbing himself. Witnesses also say officers used beanbags at first to subdue the suspect. One witness says the suspect lunged at officers with the knife in his hand. Officers open fire, shooting and killing the suspect at 8 p.m.

Evening — Morgan Pickering, a community member at the homeless shelter when the shooting happened, posts a video he took of the incident on his Instagram account.

2:20 a.m. — Portland police confirm that the man shot was the carjacking suspect and said the names of the officers involved in the shooting will be released Sunday night. They also don't reveal the identity of the man killed. The involved officers will be placed on paid administrative leave until the investigation and a grand jury hearing have concluded, per department protocol.

2:10 p.m. — In a prepared statement, Portland Police Bureau Chief Danielle Outlaw says she’s aware that videos of the shooting have circulated on social media and the internet. She promises transparency in the investigation. The full statement reads: "The Portland Police Bureau values human life and accepts the authority to use lethal force with great reverence. I am aware a video was taken of this incident by a community member and that video was posted to the internet. Please be reminded that deadly force investigations are extremely complex and take time. The police bureau is committed to transparency and will ensure the entire investigation is released in a timely manner that does not impact the integrity of the investigation."

Afternoon — The Oregonian publishes a second video taken by a community member who was inside the homeless shelter. This video shows what happened prior to the shooting.

3 p.m. — A small group of community members, including friends and family of the man who was shot, hold a vigil Sunday afternoon near the shelter where the shooting took place. Close friends say the man shot grew up in Portland and leaves behind a wife and 12-year-old daughter. Some of the people who attended the vigil say they didn't know the man, but decided to attend after they saw the videos of the shooting. "Everything about it bothers me. There were 12 police officers and one potentially armed man with a knife," Aubrey Danner, one of the demonstrators, tells KGW.

7:30 p.m. — David Rogers with the ACLU of Oregon issues a statement regarding the shooting, calling into question the officers’ use of force. “Bystander video of the fatal shooting of a man in a homeless shelter in Portland last night raises serious questions about how police handled the situation and whether lethal force was called for. Trained police officers should use the least amount of force necessary,” Rogers says. Read the full statement here.

8 p.m. — Portland Mayor Ted Wheeler publishes two tweets in response to the shooting and says it’s too soon to jump to conclusions about what happened. “Last night officers responded to multiple calls for service regarding a suspect that ultimately ended in an officer involved shooting. The loss of a life is always tragic. My priority is to discover the facts and circumstances regarding this incident. Already, there are those who want to immediately define what happened. It would be highly irresponsible for me to participate in speculation at this time. I urge us all to allow investigators to do their work, to uncover the facts, and to report on their findings.”

9 a.m. — The Oregon chapter of the Council on American-Islamic Relations (CAIR-Oregon) calls on Oregon Attorney General Ellen Rosenblum to investigate the shooting and develop better police accountability and community support measures. “We are confronted with the grave truth that police-involved shootings remain a problem in Portland just as they do in the rest of this country. The Oregon Department of Justice must investigate, be transparent and hold the Portland Police Bureau accountable for its actions," the statement reads in part. Read the full statement here.

3:45 p.m. — In a press release, the Portland Police Bureau says seven Portland police officers and one Multnomah County sheriff's deputy were involved in the shooting. In addition, 12 Portland police officers were witnesses to the shooting. Citing bureau policy, the bureau says it will not reveal the identities of the officers because of threats being made against them. The names will be released once an investigation into the threats is complete. The 12 officers who witnessed the shooting have already been interviewed by investigators, police say. The involved officers will be interviewed later Monday and the deputy will be interviewed tomorrow. Police also identify the man who was shot and killed as 48-year-old John A. Elifritz. The Oregon State Medical Examiner says Elifritz died of gunshot wounds.