As of about 3:30pm on Friday, PGE said there were still almost 20,000 people in the county who still didn’t have electricity. 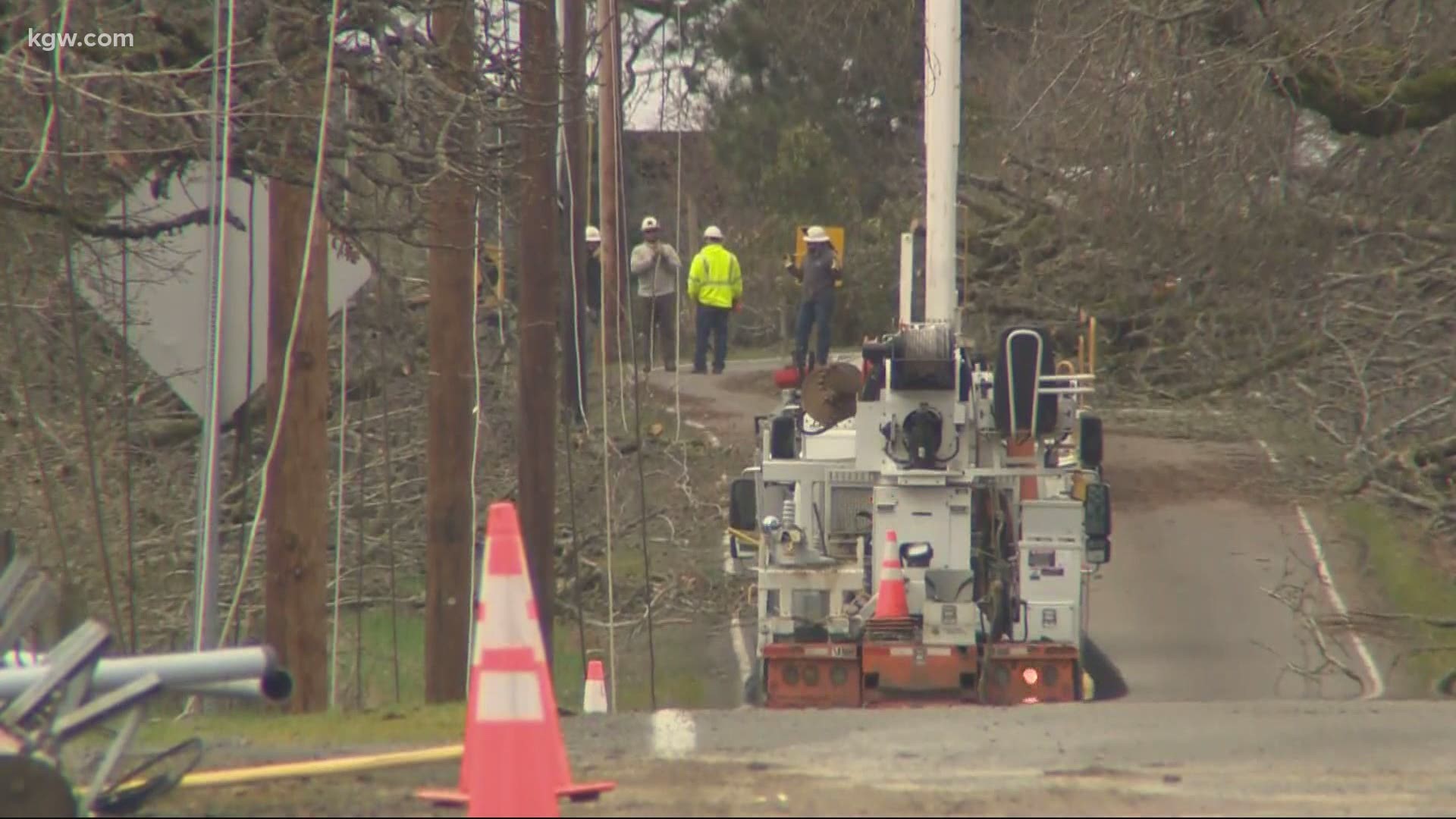 SILVERTON, Ore. — Many people in Marion county have now been without power for a week.

As of about 3:30pm on Friday, a spokesperson for Portland General Electric (PGE) said there were still almost 20,000 people in the county who still didn’t have electricity.

In Silverton, fallen trees and debris are still visible all over town.

On Friday, people could be seen cleaning up and hauling branches away.

He lives on the outskirts of Silverton. Stevens and his neighbors have been without power for a week.

“No power means no lights, no electricity, no water, no heat. The only heat really is from our fireplace,” said Stevens.

Stevens, who is a former KGW photographer, came home from work on Friday night, Feb. 12, and saw a power pole laying in his driveway.

Then, it was a sleepless night.

“So Friday night when I got home, these limbs were dropping nonstop,” he said.

Fortunately, his house was spared from damage. But without power, Stevens had to pull out camping gear and a small generator that isn't very powerful.

He said if his coffeemaker is in use, it is the only device that can be running on the generator. To prevent food from going bad, Stevens uses the generator for a few hours each day to power the fridge, then the separate freezer.

While a hassle, it’s better than nothing. Stevens has extension cords spread through his home that connect the generator to different items that need power, like phone chargers. Speaking of phones, cell reception is spotty in his area, so he dug out a 60s era rotary phone.

“It’s our only connection with the outside,” said Stevens.

For Stevens and his family, it’s been all about the essentials. They’ve stocked up on lanterns, water, flashlights and batteries.

Handwashing and dishwashing is possible, but only thanks to water from a five-gallon bucket Stevens filled up at the grocery store.

He cooks outside using a propane camping stove, and something as simple as flushing a toilet involves more work too.

“I have a hot tub. So I dip five gallon buckets in there, and that’s how we flush the toilets,” Stevens said.

After a week without robust heat as well as all the other difficulties that come with a power outage, Stevens’ wife, along with her sisters and mother, took a trip out to the coast to stay in an Airbnb where they could get some heat and take warm showers. Stevens has been grateful for warm showers at an indoor workout facility he can access through his employer.

Still, while he’s been able to get by, he’s ready for the power to come back on. But with all the damage in the area, it could take a while.

“The rumor mill has told us it could be two, possibly even three more weeks without power,” said Stevens.

KGW checked in with PGE and there's no definitive timeline available. But Silverton is one of a number of areas that could take longer because of the damage.

On Friday, PGE announced a new map function on its website where people can see how many outages there are in their area and how long it might take to get power restored.

For the East Woodburn/Silverton area, PGE’s website estimated the restoration time is up to nine days.

A PGE spokesperson said because of the severe damage, some infrastructure won't get repaired, but may have to be entirely rebuilt.