Those Who Serve: The Columbia River Bar Pilots

They guide massive ships in and out of the Columbia River Bar, one of the world's most dangerous waterways, 24 hours a day. 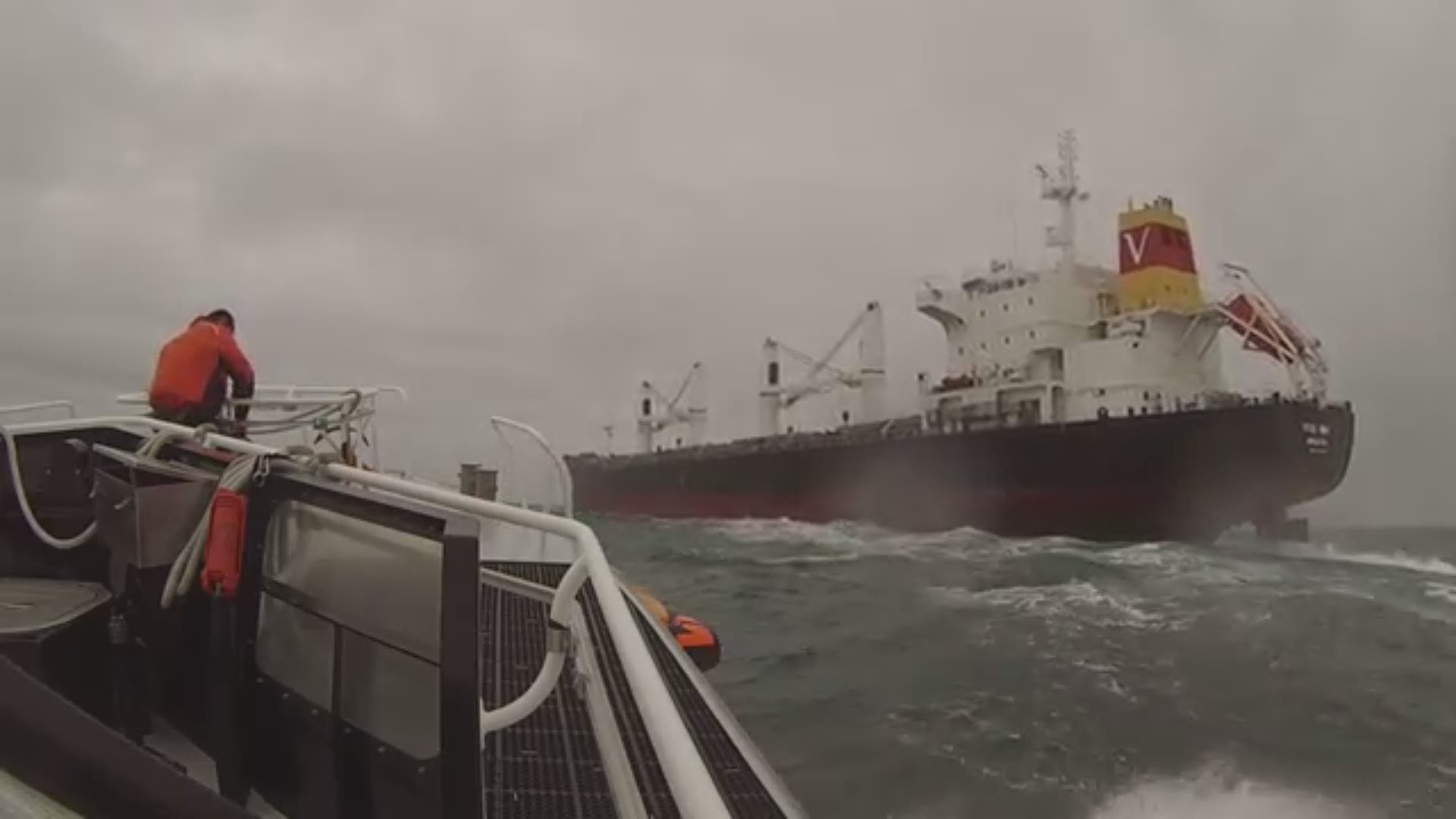 On a sunny day in early July, Phil Matteo stepped out confidently from the cabin of the Columbia River Bar Pilot boat 10 miles west of the mouth of the massive river.

He hung on to a sturdy white rail just in front of the pilot boat windshield and then grabbed a thick white rope attached to the rail and waited as the skipper slowly brought his vessel up next to a massive freighter, the Federal Yellowstone. It's nearly the length of two football fields and needed to motor up the Columbia River to pick up cargo.

Matteo wore a silver helmet to protect his head and a bright orange coat that would inflate with air instantly if he fell in the water. A strobe light attached to one shoulder would also automatically trigger and he could activate a similar light on the other shoulder.

Even though the pilot boat would be right there, the current and the waves and the freighter made the possibility of death very real for anyone going overboard.

The day was relatively calm and as the pilot boat came up next to the big ship it rolled very little.

An old-fashioned looking rope ladder hung over the side of the ship with wooden boards inserted to make steps and the rope working as handrails on the outside for the pilots to hang on to as they climb straight up the side.

Matteo is a veteran of ships at sea. He spent 27 years on cargo ships all around the world and joined the Columbia River Bar Pilots 11 years ago.

He has the boarding down to a science.

“You’re watching the swell—you’re watching the rise of the boat as you’re coming alongside. If it’s a big swell you want to catch it on the top of the swell. You don’t want to get on the ladder and have the boat come up and hit you basically, which could happen. And you don’t want to do it as it's coming down because the boat’s dropping pretty fast on some of these swells,” he said.

He's one of just 15 pilots that work the Columbia River Bar. They guide massive ships in and out of the river 24 hours a day and every day that the bar is open. There are times when the waves are so big the bar is closed but that is rare.

Matteo said he loves being outside and on the water.

After studying the ladder for a moment, Matteo stepped on the first board of the ship’s ladder and grabbed the rope to begin his climb. In just 13 seconds he was up on the Federal Yellowstone shaking hands with a member of the crew and being escorted to the bridge.

Over the next two-and-a-half hours he would give steering and course commands to safely guide the big ship across a stretch of water that can be the most dangerous in the world. Since the late 1700s, around 2,000 ships have gone down in and near the Columbia River Bar.

“The bar is where current, swells and sediment all meet,” said Pilot Dan Jordan.

“So, it’s a little shallower there. So, the current going out meets opposing swells coming in. And changes hourly,” he said.

The combination of a powerful current and surging ocean tides can create monster waves.

“Right,” said Jordan. “Or swells coming in, when the swell hits it, it makes the current bigger—maybe breaks. Not today. It’s a beautiful day. But in the wintertime, we pilot ships in 20-foot seas,” he said.

A 20-foot sea is nearly two stories high. And to add to the danger, when the ships are empty, they ride higher in the water and can act as a huge metal sail in gale-force winds.

It takes a lot of experience to handle those conditions and keep the ship safe and the environment protected.

“We all had to have served as captain on a merchant ship at sea for two years to be able to apply,” said Jordan.

“To be captain of a merchant ships means a whole career at sea. I was 24-years at sea before I got into the pilots,” he added.

“We all sailed on different styles of ships too. Freighters, tankers, container ships,” said Jordan.

“So whenever we have a ship here if there’s an issue we always have at least one of the pilots whose been there before,” he said.

The danger to the pilots is not just theory.

On January 22, 2006, a Columbia River Bar Pilot named Kevin Murray fell as he got off a ship in a storm. He died before he could be rescued from the water.

Their job is vital to the $24 billion in commerce that flows up and down the Columbia River each year.

“The Columbia River Bar is known as one of the most dangerous waterways in the entire world,” said John Coyle, chairman of the Columbia River Steam Ship Operators Association, which represents the big ships.

“We are the number one wheat port in the United States and we’re number two for grain overall. And these harvests usually start from August through September, which increases the traffic and it just coincides with a really bad weather time in the Pacific Northwest,” he said.

He added that trains carrying wheat and other grains from the west and Midwest are timed to arrive at ports along the Columbia and Willamette rivers in a carefully choreographed sequence that matches the arrival and departure of the ships.

The bar pilots keep that sequence running even in bad weather.

“Environment, of course, is huge in the Pacific Northwest. We have to protect our rivers. And we’re carrying cargo sometimes that are, are considered dangerous and there’s just overwhelming emphasis on doing things properly and safely and I think the pilots are the first step in making that happen,” he said.

Big ships cross the Columbia River Bar on average 3,000 times per year. That’s roughly 10 times a day with someone going upriver or out to sea. Most of us never see it. And that’s fine with the pilots. It means everything is working smoothly and everyone is safe.

“We’re here to make sure that the ships get in and out safely and don’t cause infrastructure or environmental damage,” Jordan said.

“If you didn’t have pilots then you’re kinda putting your whole port in jeopardy,” he said.

RELATED: Those Who Serve: Mentoring students in computer science and cybersecurity