"We are thrilled that the students' hard work preparing for the Starlight Parade will be on display next weekend," Canby High principal Greg Dinse said. 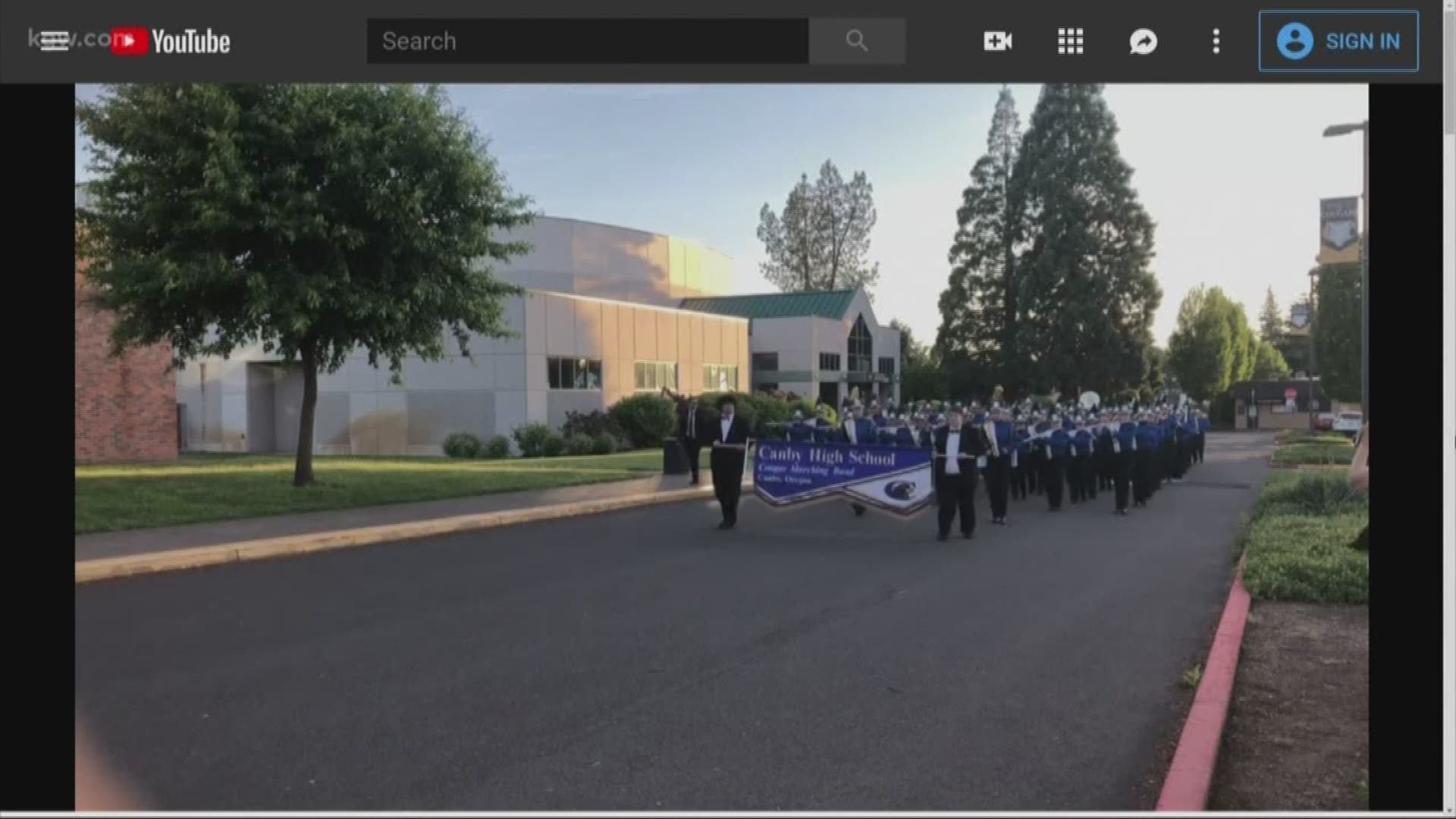 CANBY, Ore. — The Canby High School band will get a chance to end its school year marching in a big parade, after all.

The band, which was disappointed when it missed the Starlight Parade in Portland on Saturday night because of a transportation mixup, accepted an invitation Monday to march and play in the Rose Festival Grand Floral Parade on Saturday, June 8.

"We are thrilled that the students' hard work preparing for the Starlight Parade will be on display next weekend," Canby High School principal Greg Dinse said Monday. "These students deserve a chance to shine."

The Portland Rose Festival Foundation extended the invitation to the Grand Floral Parade on Sunday.

"Even though our line-up is complete, we will make a space for these dedicated young musicians to showcase the hard work they have put in to be in the 2019 Festival. We know they had planned to complete their season in yesterdays Starlight Parade, but we're hoping they can squeeze in one more day and join us," Portland Rose Festival Foundation spokesperson Rich Jarvis said in a press release.

According to posts and comments on social media, the students showed up Saturday at the school, ready to board a bus and travel to the Starlight Parade. But no bus was present, and the kids ended up stuck at the school instead.

With nowhere to go, the band put on their uniforms and marched in the school parking lot instead, as seen in this video posted to YouTube.

"The Canby High School band students worked incredibly hard learning to march and memorize music these past weeks," Nick Luchterhand, the Canby High band director, said Sunday. "It's a lot of admirable practice and dedication that I don't like throwing away. So, we put on the uniforms, put our instruments together, and marched around the school parking lot."

Canby School District said Monday it completed its investigation into what happened with the transportation. The district said that paperwork to request the bus was submitted by the band director, but it wasn't processed properly.

"I made some assumptions about the paperwork I submitted as part of the request for the field trip," Luchterhand said. "It's my responsibility to make sure transportation is arranged, although I was not aware I needed to do so. I offer my sincerest apologies to all the band students, parents, and volunteers."

Dinse also apologized for the mistake.

"I am sorry that this procedural error caused our students to miss the Starlight Parade. I have worked with Nick and our support staff to ensure everyone knows the process moving forward," he said. "We know how hard these students practiced and prepared for the event. We value the entire band community; students, parents, and volunteers. We are sorry that this happened."

Luchterhand said he was impressed by the maturity of his students in dealing with the setback.

"I have amazing students. They truly deserve respect and admiration for their hard work," he said. "Life doesn't always deal you the best hand of cards, but his was a teachable moment to make the best of your situation and persevere. I can't express enough how proud I am of these kids. We see their hard work, we feel their frustrations, and we respect their maturity in handling difficult news."